Can You Guess What Got Me "Up And At 'Em" This Morning, Had Me Drive Four Hours Round Trip And Is Now Waiting Quietly In The Back Of Frank? Hint: It's Not Paul McCobb But Was Often Misatributed To Him For Ages. Status: Farm Fresh. 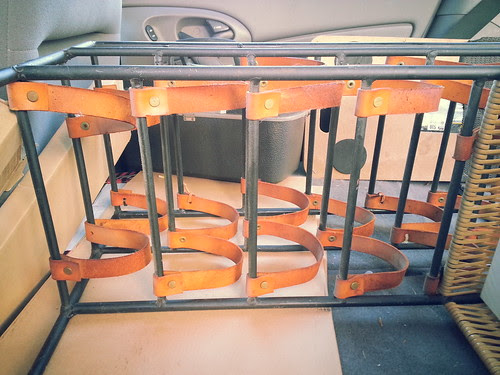 It's a mess and these photographs suck, but you get the gist.  As you can see there are a number of brass rivets missing and the leather itself isn't in the greatest condition...but the bones are good and it was worth the long drive to retrieve! 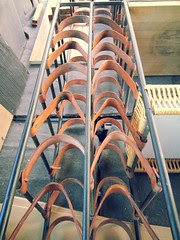 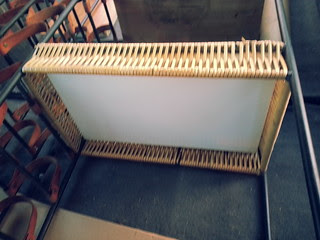 Have ya guessed what it is yet?  It's an Arthur Umanoff tall wine rack / shelf by Raymor!  I've been

lusting for one of these for AGES!!!  I thought the one I found on the South Bend Indiana craigslist

back in September was cheap...cheap enough to make me consider the drive there...but this one was

listed for a mere $20.  No, I didn't forget a Zero...twenty bucks.  Of course I still had to drive for four

hours to get it and of course I didn't just give the seller a mere twenty bucks, one must protect one's

craigslist Karma.  But yeah, it was a super score Thursday for the Mr.! 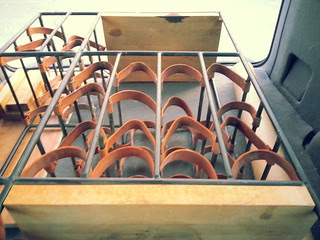 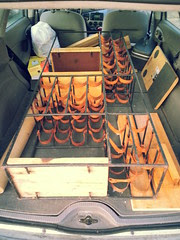 ::sigh:: I've got some work ahead of me.  First I've got to see if the leather straps are salvageable.  If

all the lost rivets, and there's more than a couple.  On top of that, one of the butcher block shelves

messed with anything like that.  I only took shop class once in the 5th grade.  Seemed stupid.  I've

never met a mechanical device that didn't explain itself to me...why would I need a class for that?

May as well have taken a breathing class.  But then, I don't wanna mess this up either...so I'll do a

little reading before I get all glue-y and clamp-y on it.  Better safe...and all that.  So you can expect

another post on this some time in the (hopefully) not too distant future, at which time it'll (hopefully)

be much more presentable.
Posted by Mr. Modtomic at 3:22 AM

Email ThisBlogThis!Share to TwitterShare to FacebookShare to Pinterest
Labels: Arthur Umanoff, Before and After, Craigslist, Raymor, Travels, Vintage