Well...This Little Group Of Franciscan Duet Is The Last Of The Sunday Columbia Mo. Booty. It's Not So Impressive Except That I Actually Need That Salt / Pepper Shaker Set And Those Ladles Aren't Exactly Easy To Find. Status: Added To The Collection. 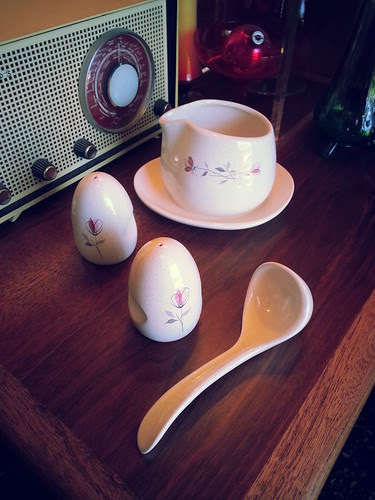 So these were actually two different lots from the same vendor.  I wasn't sure if I needed the Gravy Boat but I wanted that ladle.  The salt and pepper shakers where a shot in the dark too.  Turns out I needed 'em. 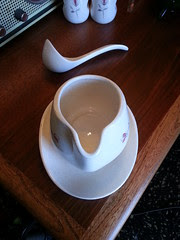 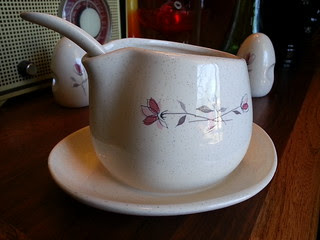 You might remember Mr. M scoring a nice "starter" set of Franciscan Duet a couple Three years ago.

Since then I've been steadily adding bits and pieces as I find them.  It's become quite a formidable

collection and I've done it on the cheap.  Franciscan Duet uses the same pieces as the much more

expensive Franciscan Starburst, just with a different decoration and a much easier to acquire price

tag.  It even shares the same speckley oatmeal finish. 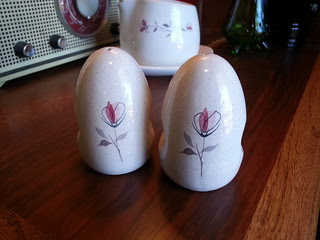 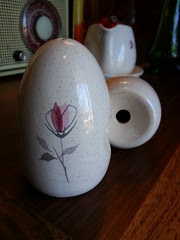 It's a lovely and artistically Mod pattern.  Plus, it's not so precious that you can't use it on a regular

basis if you choose to do so.  My Starburst collection?  Don't be ridiculous!  I'd NEVER sully it with

something so pedestrian as food!  Pshaw.  And the truth is, I haven't even sunk too much dough into

THAT collection either!  It's all about buying smart...not just when you want something. 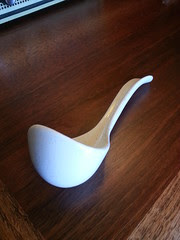 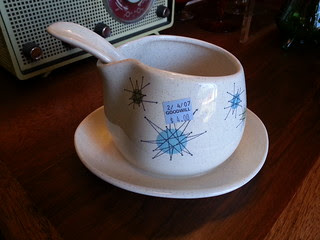 Speaking of the Starburst collection...the ladle from the Duet gravy boat is undecorated and as such

yellow starburst on it, but who'll notice.  I guess no one would if there were actually gravy in the

gravy boat, but since it's sitting down inside that container you'd never get to see that decoration