Happy New Year. Welcome To 2013! Remember That Drexel Dining Set I Showed Ya A Week Back? One Chair Needing Repair? Status: Blind Luck. 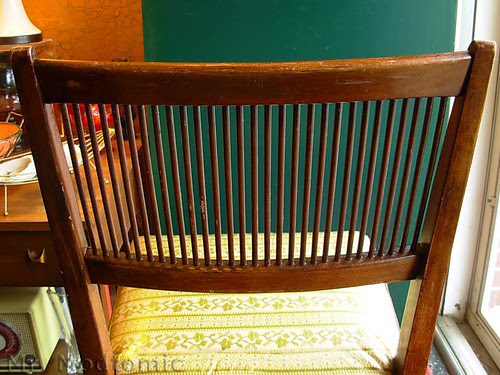 A couple days ago I found a slightly rough Drexel Profile dining table and Six chairs.  Because one of the Two armchairs has a single broken and missing dowel in the seat back I wrote that I hoped to find another chair that would kindly donate one.  Guess what! 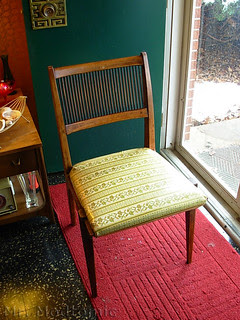 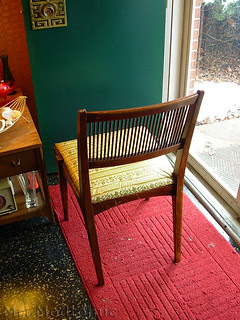 Yup.  Just like I predicted, seems like I see single Profile chairs around from time to time and sure enough,

within a week one popped up.  And I almost couldn't hope for a better donor.  Oh, sure...it'd be nice if it

some minor structural issues.  At least it was cheap.  Cheap enough to use for parts!  Oddly enough, this

was the other item that I found at Treasure Aisle antique mall Sunday. Oh, and some seriously bad upholstery!  Actually, the upholstery is in great condition...it's just kinda ugly.

But somebody loved it.  Loved it so much that they covered it in clear vinyl (like Grandma might have done

to her sofa).  Too bad it wasn't something worth covering.  Actually, it doesn't matter.  It's probably never

going to see the light of day again since, well...it's just one seat cover. 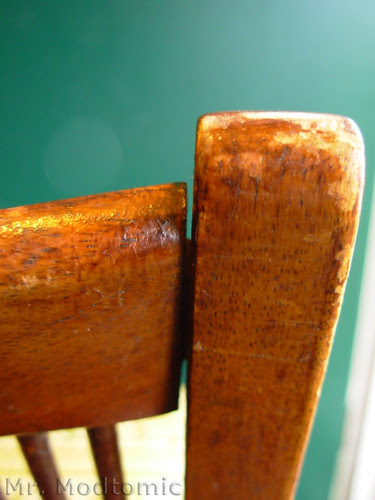 Second stroke of luck; the joints between the right seat back upright and the cross members are already

coming apart! I'll hardly have to work to get one of those dowels out. Just a little "tap tap" with a hammer

and that should do it. Once I get one out I'll just have to try and get that awful re-stain off and figure out

how to fit it to the armchair that needs it. We'll see how that goes a another time. Happy New Year!
Posted by Mr. Modtomic at 6:12 PM