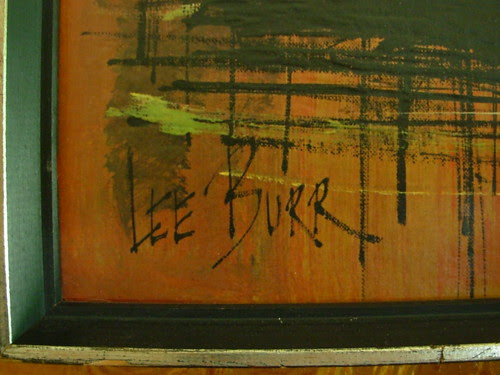 This is my second run in with this very interesting wrinkle in the fabric of Vintage Modernism. A friend of ours had a "Vanguard" acrylic painting that they found in a closet of their home just after closing and moving in. It was not their style and thought I might like to have it.

I didn't think it would quite fit my personal taste but it was in the right vein. I told them I'd sell it

for them. And sell it I did! The thing is, I didn't really know if it was worth anything more than for

it's general aesthetic beauty as a decorative painting. Who was "Vanguard" and is his work

valuable? Ya gotta love this day and age. This is the kind of information you can now get on

your phone nearly instantly while at the Goodwill by just poking around on a touch screen! So 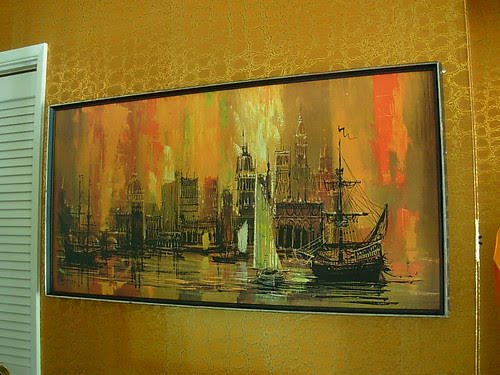 Well, turns out that Vanguard is the studio where Lee Burr made paintings....hundreds...of

perhaps...Thousands...of paintings. Why would anybody sign a painting Vanguard if that was

the studio name? Dunno for sure but since the actual painter (note: not artist) wasn't going to

sign his or her name...well, what difference does it make What name is on it? "The actual

painter (note: not artist) wasn't going to sign his or her name"? Right. Even the paintings with

the name Lee Burr or Lee Reynolds were not painted by Mr. Lee Burr Reynolds (except for a

very few me thinks...and we are not likely to stumble upon them at the thrift store so put your

$$$$ dreams away) but by the staff of painters (Ok...who may be very fine artists but aren't 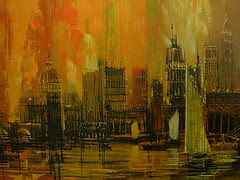 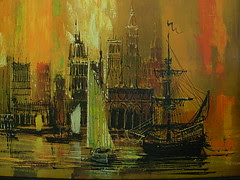 So really, even when you find a genuine painting by Lee Burr, Lee Reynolds, Reynolds or

Sucks right? No. It doesn't. It just means it's not gonna finance your retirement. Generally, by

what I've seen, the most one of these paintings might fetch (like in a shop) is about a couple

hundred...and that would be a stretch. I'd never pay that much. The thing is, these painting and

percentage (vintage modernists) of the general population (regular folks). The demand is not

great, but just enough to keep a good number of these out of the landfill and on the walls of 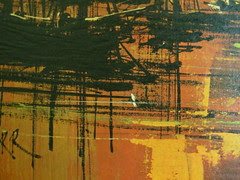 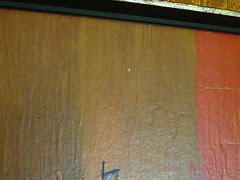 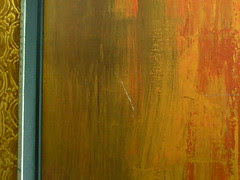 This particular piece is just a print (a print of a mass produced painting...that's just too funny)

and has a few small defects from going through the Thrift Store donation process. Since it's a

print it'll be easy to fix the little spots that are lacking color. Actually they can be left as is since

it's difficult to even tell that the spots of white aren't there on purpose! I'll leave it up to the next

lucky owner of this print to fix or leave as is. So yeah, this is available. I'll have it on my ad(s)

soon. If anybody locally would like to snatch it up leave a note here or contact me via my

craigslist ad.
Posted by Mr. Modtomic at 2:11 AM