Our First Virtual Vintage Voyeur Poke Around! And What A Smokin' Hot Pad. Try Not To Stare...It's Rude! Status: No, Just Kiddin'...Go Ahead And Stare. 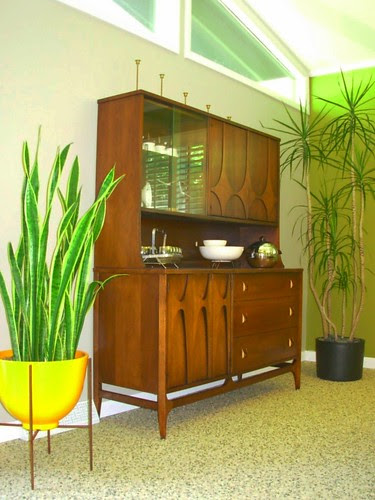 I FINALLY got the opportunity to have my way with Dan and Tiffany's most excellent crib this afternoon! Score! I had to drop by to pick up a set of dining chairs, right...so since I was there I thought I'd just barge my way in and start shooting pics and yelling at people to get out of MY SHOT!  I'm a PROFESSIONAL, ok? 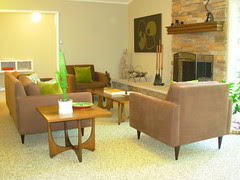 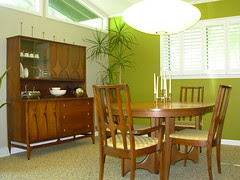 So if you've been readin' this here lil' ol' bloggidy blog for any time at all you'll know that Mr.

Modtomic is a big fan of the Broyhill Brasilia line of home furnishings. I've got a dining room full

of it, a bedroom full of it, another tall chest in the spare bedroom and a table that has become

ubiquitous in most of my posts in our entryway. Seems like a lot right? Pppphhhffff, whateve'! 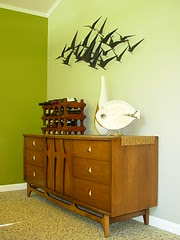 Oh, and see that really....really great painting above the server? Dan produced that HIMSELF!

I KNOW! Sweet! He had another really cool piece that he had made in this spot last time I was

there but he had recently sold it. So, you know...if you like what you see, maybe he can hook

you up! The Curtis Jere "Birds" metal sculpture is so not available. I know...cuz' I've been

lobbying for it for quite some time. Looks so good here, doesn't it? 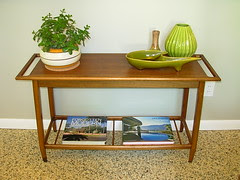 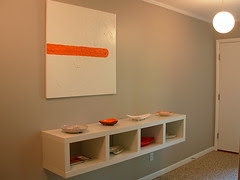 I didn't check but I bet that this server is a Lane piece. It looks sturdy like those Lane Acclaim

pedestal table once belonged to Mr. Modtomic! I traded that table and all the seat pads you

which is a more traditional "legged" Brasilia table. He had refinished the "legged" table and it 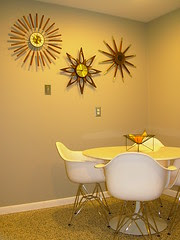 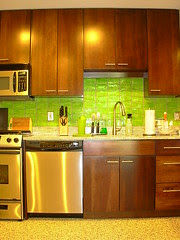 Nice kitchen, no? This is a Mid Century Modern ReMix done right. How lovely are those

cabinets and that back splash? Bold but not kitchy atomic nor boring builder bland. The chairs

are new reproductions (nice, nothing wrong with that) and the table is a recent craigslist

bargain. Dan's not as active a hunter gatherer of this stuff as I, but he can buy and sell with the

best when he needs to. He recently let go of a beautiful Burke tulip style dining set for a good

bit more than I appraised them at. The set was a little too big for the space. He knows what he's 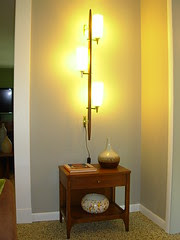 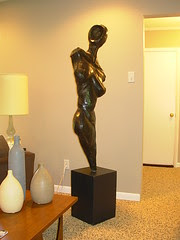 Yup, so much Brasilia that a night stand snuck into the living room! It works. Flexibility is a

virtue. The wall mounted light fixture above it was a craigslist score that Mr. Modtomic missed

out on. There was this sale at a doctors office on a Monday that had all kinds of great mid

century items, but alas...it was on a Monday...while I was at work. Dammit. The large sculpture,

I was told, is on loan from a friend who is the artist. I assume it is also available if it tickles your

don't). I can't imagine it'd be cheap by any means. It looks perfectly at home here. 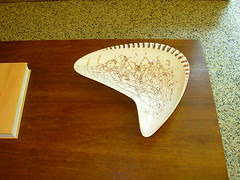 livable 85% of the time and SO suffers by comparison, but I think it probably looks pretty nice

most of the time. D. and T. seem to take some time to hand pick what they lay their eyes on

day in and day out. I'm betting they like things tidy! 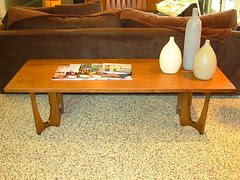 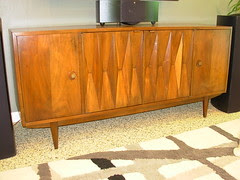 The Family room gets yet another Brasilia coffee table behind the sofa. Kinda out of the

ordinary, but it works nicely. I guess if you needed it out front of the sofa it could easily be

relocated. I'm telling ya, Dan and Tiffany live in a Broyhill Brasilia catalog! I'm not sure of the

lineage of the large credenza. Dan may have told me at some time in the past but I can't

remember. It is texturally very interesting, much in the same way that the Brasilia line is. No

wonder it's been included. It serves to store audio video equipment and hold the great big TV 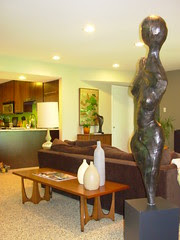 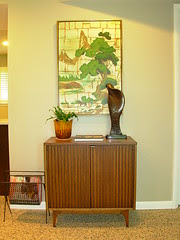 Another shot of that amazing sculpture. In the background you can see into the kitchen and

what's that? Another piece of Brasilia? You betcha'! I actually sold this one to Dan. It did not

look this good when he purchased it. The man has the touch! The top of this cabinet was a bit

of a mess. I need to ask him his secret. He really does a good job, but could you imagine him

placing a ganked up piece in this place? Me either. On the cabinet is yet another "on loan" 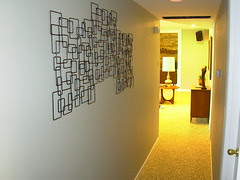 ::sigh:: I so wish I had a green thumb. I love house plant. Mother Modtomic has always had

plants around the house but I never picked up on how not to kill them. I've tried. I water too

much and not enough and everything turns brown. Have you noticed the floor? It's a cool idea.

It's like pea gravel that is epoxied to the concrete slab. Looks so good. 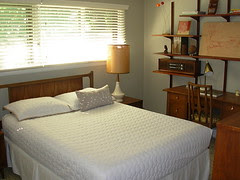 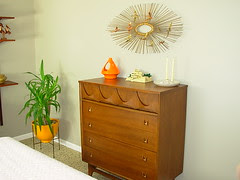 I didn't have time to shoot the entire house as we had other stuff going on as did Dan and Tiff.

We only missed the Master bedroom, the bathroom (which is really nice but c'mon...it's a

bathroom) and the nursery (they JUST had their first...and he's soooo tiny!). This is the spare 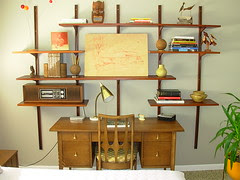 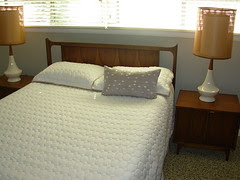 Love that shelving! I think that also came from the same Monday sale as that light fixture. The

Brasilia desk was once mine. You might remember seeing it here a while back! I traded it to

Dan for some Eames shell chairs and a console stereo. Looks pretty good in his place. I wish I

had a picture of all my old orphans like this.  Those lamp are pretty special too.  Before I found

shades for my own bedside lamp these were suffering from heavy covet syndrome via Mr.

Modtomic.  I'm sure you understand. 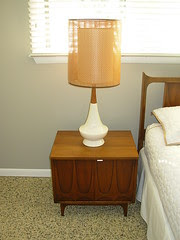 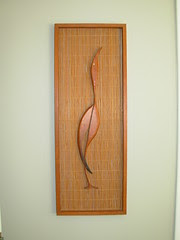 Well, this wraps up our first foray into Abode Invasion. I hope you enjoyed the tour. Dan and

Tiffany really know how to put a place together. I thank them for their hospitality and patience

in dealing with me and my camera. Feel free to fawn all over them in the comments below!
Posted by Mr. Modtomic at 3:43 AM