Did I Ever Tell Ya That Mr. Modtomic Is A Leg Man? A Mid Century Atomic Iron Hairpin Leg Man! Status: Just Another Project Out In The Garage. 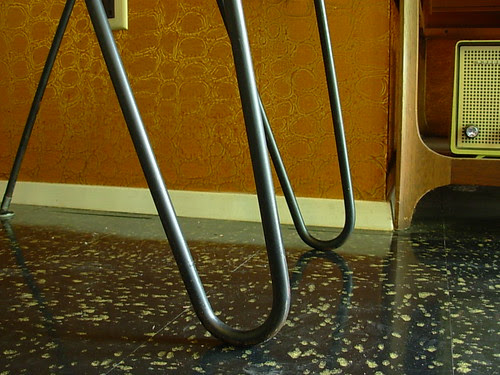 I bought this a few weeks after letting the Dorothy Schindele desk go, wishing all the while that I would have found it before. It would have been a perfect match and I would have loved to include it. It's too bad the new owner of the desk is so far from here or I would have tried to get it too them. But it's no problem...I got another desk it can go with! 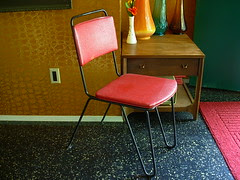 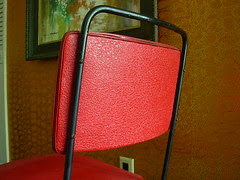 wanted to do with it. You know how it is. Something smacks ya in the face and you know you'll

find a way to need it. It wasn't expensive by antique mall standards so, other than it taking up 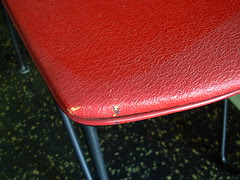 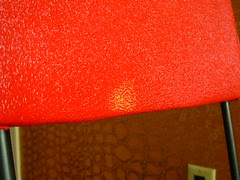 scheduled for complete gut rehab. I thought it had a little smear of yellow paint on that bright

Fire Engine Red vinyl. I thought I'd use a little Goof Off and clean the yellow paint off. Oops.

Turns out...well...I'm pretty sure now that the vinyl is Yellow and has been painted bright Fire

Engine Red! Oh well, other than making for a slightly less appealing set of pictures, no harm

no foul. Like I said, scheduled for a gut rehab! 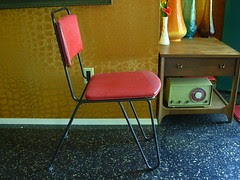 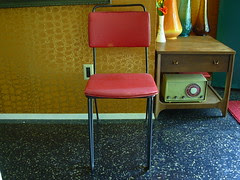 Actually, when I spotted it I thought it might BE a Dorothy Schindele chair. It ain't. But it's close,

just check out this (actual) Dorothy Schindele chair at Dusty Modern...see how one could make

this error. It's so close! But kinda backwards. 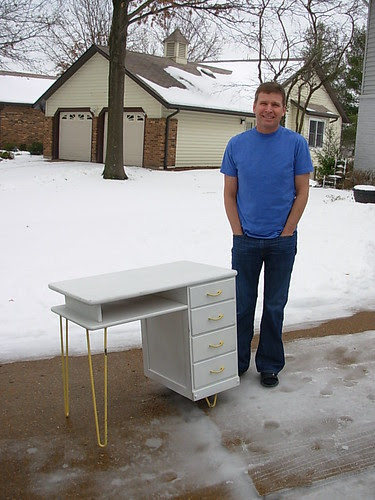 Not Mr. Modtomic, BTW.
Anyway, as far as I can tell, it's not by a "famous" (in our little world) designer so it can go with

whatever. I'm totally seeing it with project hairpin desk above! Picture the desk with black legs

and it'll look less like it supposed to be covered in baby dolls. I may even have some

spectacular handles around somewhere. But then...the satin black legs with the yellow handles 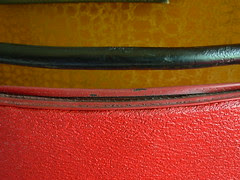 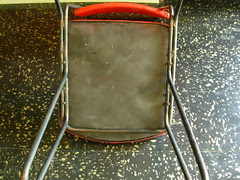 I'm not sure exactly how to recover the seatback but the seat will be a joke. I've already got

plenty of material too. I think I just need to cover the front of the seatback and make a "mock"

back that I can cover and attach via four screws. I'll work it out.
Posted by Mr. Modtomic at 1:09 AM