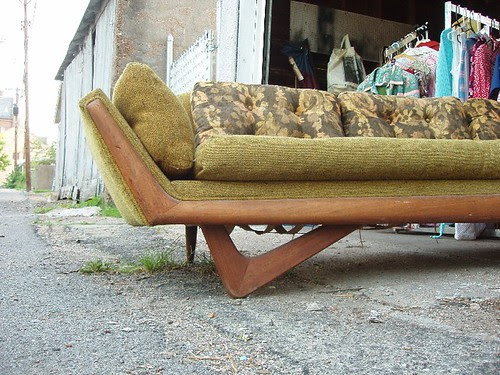 Free. That's right. We picked this up for FREE. The low low price of nothin'. Three easy payments of absolutely nada! I know...wow, right? Eh, it was a long time ago and the thrill is gone.

So here's the "acquisition" story. In the old days (like 5-6 years ago) the Girlfriend and I would

get up Saturday morning around 6am, jump in the car and make the estate sale rounds. We

are not Saturday morning people. I'm not a morning person at all and the Girlfriend, the poor

doll, only gets to sleep in on the weekends. But I'd drag us up and out the door. This was way

before the discovery of estatesales.net where you can get a pretty good visual idea of what

might be waiting for you at any given sale. I was just getting an address and a limited idea of

what they had from ads in the paper. It was pretty hit or miss but we usually found a little

Well, we had been at it all day and were at the last sale on our little list. It was a modest

bungalow in south city just on the south bank of River Des Peres. The thing about these kind

of places is that you just never know. These folks lived through the depression and learned to

appreciate what they had come to have in life. So much so that they threw away nothing it

would seem. When an item was replaced it was put on a shelf in the basement or garage. It

was not thrown out. It might be needed again! When this sofa was replaced it apparently made

it's way to the sun porch. The sellers were having people come in through the back door and

leave through the front. It was about 1pm when we arrived and were likely the last buyers of the

day. We found nothing in the house but as we were exiting through the sun porch I spotted it. It

was waiting there with a note that read "Free Take". Really! "Free Take"! Uhmmm...Ok. 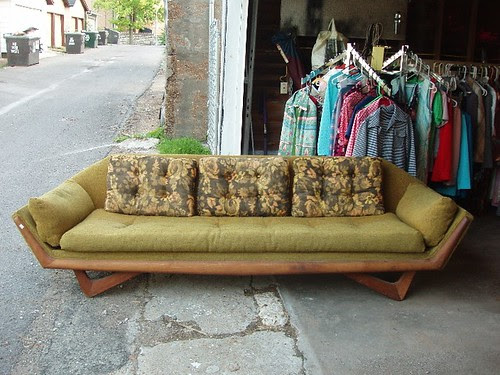 We were driving a two door Honda Civic at the time. No way was this going in that! The sellers

to move our booty. We borrowed the Girlfriends mothers van and were just able squeeze it in if

we pushed the seats all the way forward. It was quite comical in that I felt like I was driving like a

clown with twenty other clowns stuffed in the car with me waiting to spill out. But we got it. It was

ours. Did I mention it was free? 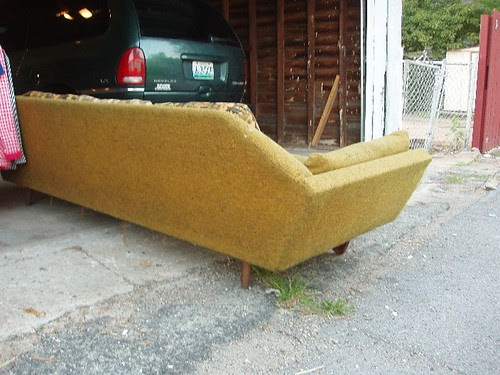 Now the sad story. You see, this was early in my informal vintage modern education. I knew it

was something special, just not what. I just thought it was Jetsons looking for real! I had never

heard the name Adrian Pearsall before, or Craft Associates. But I knew a little. Just not enough

to hold onto it. I had a couple come by to look at a record player that I had available. When

they arrived they noticed and admired the Pearsall sofa (of course!) and asked if it was

available. We hadn't really been using it as it was itchy (wool? fiberglass insulation? who

knows?) and we kept stuff on it since I was afraid Kennedy would destroy it with his sizable

claws. So after giving the Girlfriend a "what do ya think" look, I said sure. They asked how

much and after a few more seconds of (lame) thought I shrugged and asked (asked!) $125.

Well of course they snapped it right up. They blinked twice and said they'd be right back with

the additional cash. They were moving to Chicago. They bought a sofa that they were then

was gonna miss that couch.
Posted by Mr. Modtomic at 2:18 AM