Sorry So Late. Just Sneaking This Post In Before Midnight! Wanna See Some Real Progress Being Made On The Broyhill Brasilia Drop Leaf Dining Table I Found Last April? Status: Progress - It's What Moves Us Forward (Empty Platitude). 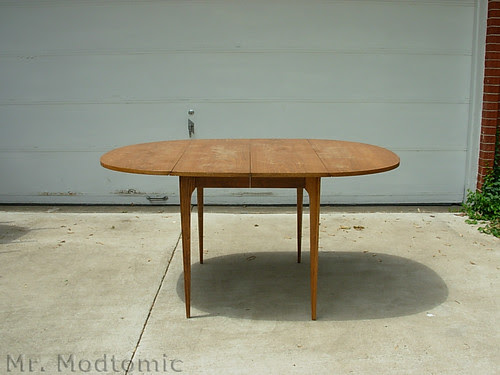 You might remember this table from a previous posting back at the end of April.  As found (in the sellers basement) it was a bit of a mess.  I was planning a quick flip but it got a lucky reprieve...cuz I just never got around to it.  Then about 3 weeks ago I got a bright idea! 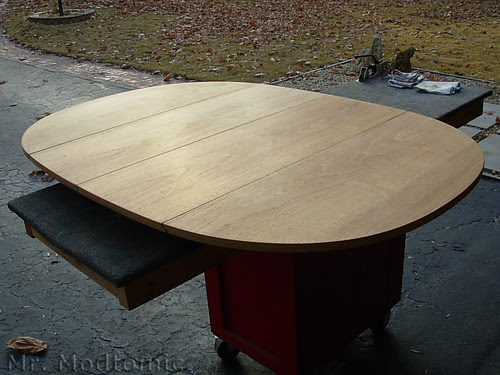 Well, it was more of a realization than an idea...or maybe both.  A combo, if you will.  You see, I

have the greatest of intentions with all these projects that I get myself into...but I don't always (hardly

ever) follow through to fruition.  And for real...I don't have the time to learn all the skills and actually

use them AND have a regular job AND publish a DAILY Blog.  Make no mistake, I am not a roaring 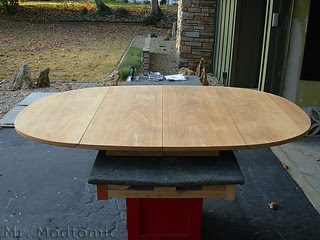 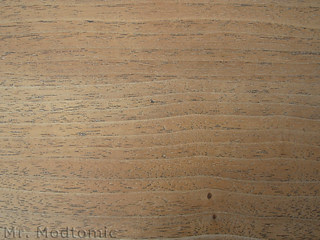 But, I know someone who already HAS the skills and DOESN'T blogcast daily!  I know he can do

the job because, up until I recently found my dream dining table (the Florence Knoll oval dining table

I posted about in September) I was using a Broyhill Brasilia dining table that he had refinished.  You

might remember his joint that I did a virtual tour of a while back.  It was one of the most popular posts

I had ever done for a long while. 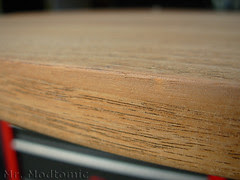 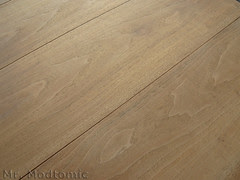 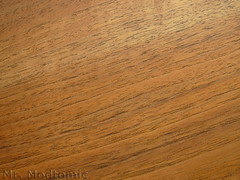 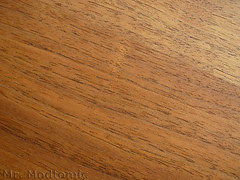 So I dropped the table off over at Dan's joint about three weeks ago and told him to take his time.

If everything works out I have three or four more tables for him to work on in the near future.  He

shot me a pic of the progress thus far last week which is what you are seeing here.  Only then did I

realize that I had forgot to give him the leaves.  So today I dropped those off.  I expect that he'll

have the whole thing done and buttoned up in a couple of weeks.  The second two photos above

show an approximation of what the grain will look like when stained although a little darker.  It

already looks soooo much better.  I'll be proudly offering this at my booth space at the Green Shag

Market just as soon as the finish dries.  It's nice that I'll be able to spread some of the take from a

much better looking product around like this.  Plus, I'm betting that Dan gets a lot of potential

"business" after folks see what a great job he does.
Posted by Mr. Modtomic at 11:37 PM