So...Looks Like I'm Collecting Libbey Silver Foliage Glassware. And I Found A Handkerchief Vase That I Thought Looked A Little Like An Alvar Aalto Piece. Not So Much But I Did Figure Out What It Is! Status: No Mystery Here. 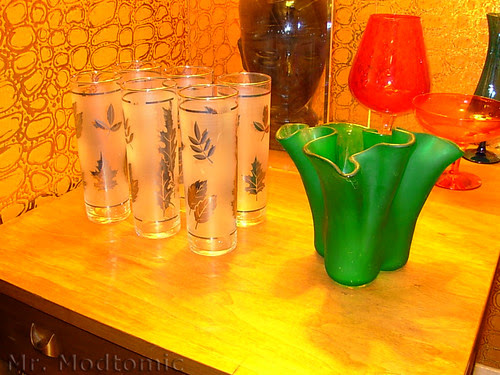 Over this last weekend I found six more Libbey frosted Tom Collins glasses in the Silver Foliage pattern and this fantastic green frost / painted handkerchief style vase.  The Libbey glassware is no mystery but I really didn't have much of an idea about the vase other than I felt like I'd seen the style before. 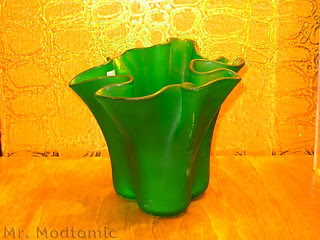 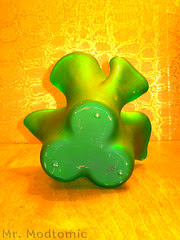 The style I was reaching for was the vases by Alvar Aalto but it's obviously not related.  Still, it

took me a couple of days just to figure THAT out!  I found this vase languishing on the shelf of a

west St. Louis county Goodwill and it was already scratched up.  That color you're seeing is

actually just some sort of paint and it's on the outside of the glass.  Of Course it got scratched up.

And it scratches off pretty easily.  The vase is by Muurla, a Scandinavian company.  These

seemed to also come in clear so I'm going to go ahead and remove the rest of the paint.  It'll look 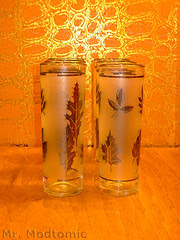 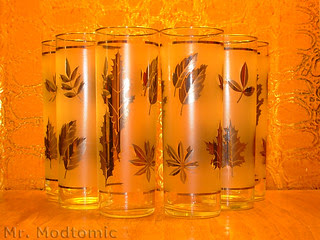 I found these tall Tom Collins (a cocktail made from gin, lemon juice, sugar and carbonated water)

glasses at the same thrift store that I just picked up 6 water goblets in the same pattern: Libbey

Silver Foliage.  Just like the water goblets there were actually 7 in the store.  While I had to leave

one of the water goblets behind because it was chipped I was ready to purchase all 7 of these.

When the cashier was wrapping the second or third one, she set it on the counter a little too roughly

and it cleanly broke into two pieces.  Well, that's exactly why I was ready to buy 7...to have a

spare...just in case!  At least I didn't have to buy the 7th for it to serve it's purpose!