Sorry I Missed My Post Yesterday. I've Been Charged With Running All Around Chicago From The Moment I Awoke This Morning Until JUST NOW. Tried Blogging From The Phone But That's A Tough Row To Hoe. Ever Seen THIS Russel Wright Dinnerware Pattern? Status: Left Behind. 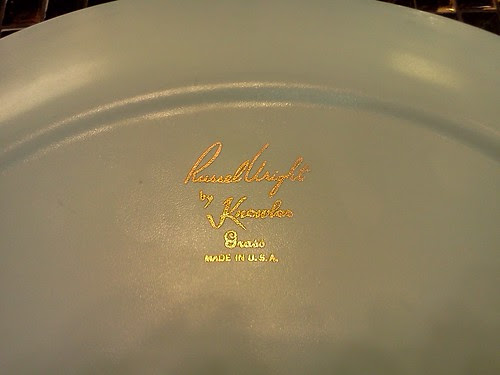 Yeah, I got totally high-jacked today. Seems that's how it goes when you're out of town visiting others. Your time is not your own. I haven't watched TV in Three Days. I NEED some serious down time. But it's not been Bad by any means, just overstimulating.

Take today for example.  Got up, picked up the Girlfriend's G-ma and met the Uncle for

breakfast.  Dropped of the Girlfriend and G-ma at Macy's for shopping and the Uncle at

home.  Got an hour and a half to look through Edgewater Antique Mall then had to pick up

Uncle and head back to pick up Girlfriend and G-ma.  Drop off G-ma and drive directly to

Theater to see Blue Man Group.  Done with Blue Men, drive back to pick up G-ma and

head out to fantastic Indian dinner.  Drive back to G-ma's and drop her and Uncle off and

then right back to near restaurant to have drinks with our gracious host for the weekend.

That's been my day.  Exhausting. 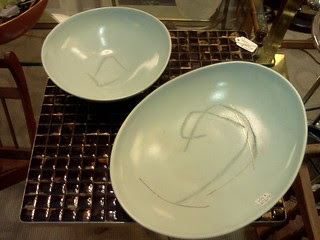 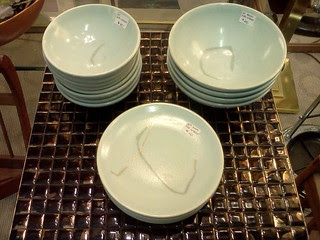 As I alluded to above, I tried and failed to do this posting on my phone.  The phone has the

capacity to do this but it's a serious PAIN and it's a SLOW process.  I headed out to the car

while everybody else was having libations at a local watering hole to make the attempt.  45

minutes later I realized I wasn't going to get it done before midnight so I just gave up.  Fail. 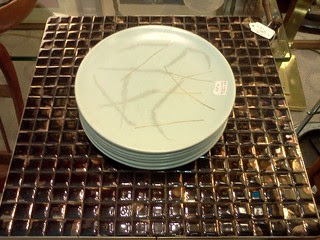 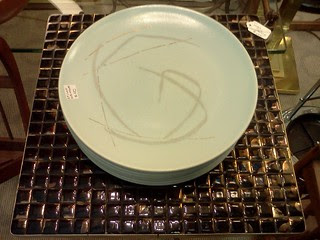 Anyway, have you ever seen this pattern by Russel Wright before?  The pattern is called Grass

and the dinnerware is by Knowles.  It's hard to see in these phone camera pics but the base

color is a very subtle mint or maybe seafoam green.  The pattern and color is so subtle that I

almost passed right by the set. 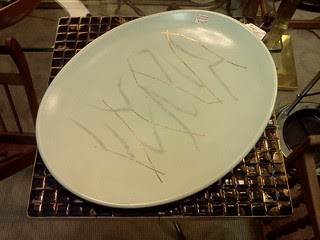 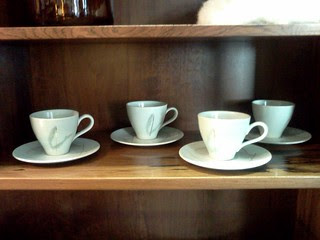 I wish I could have afforded to bring the set home but...for real, do I NEED another set of

ANYTHING Russel Wright...or really dinnerware in general?  Nope.  Not that it stops me

when the dinnerware in question is a stupid silly bargain!  But alas, this is not what I picked

up at the Edgewater Antique Mall today.  To see THAT you'll just have to be patient!
Posted by Mr. Modtomic at 1:08 AM