The King Is Dead...Long Live The King!!! We Have Officially Replaced Frank Our Focus Wagon. It Was Just Time. Status: Purpose Served. 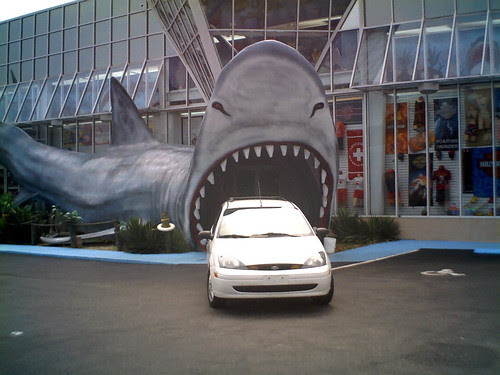 "RUN FRANK, RUN!  That Shark is gonna git ya!"  It didn't get him.  This is perhaps the very first picture I have of Frank.  We bought Frank and Immediately took him on a roadtrip to Myrtle Beach SC.  I spotted this giant shark which serves as the entrance to one of those beach wear / beach towel / beach souvenir shops.  Well Of Course I had to get a picture of it trying to eat Frank, right? 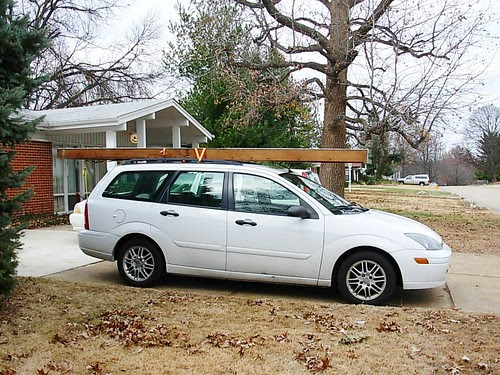 Frank with a Very long steel edged countertop on the roofrack.  Had to drive home slowly.
We bought Frank four years ago. We were looking for something that got good gas mileage,

could haul some stuff and didn't cost an arm and a leg. Check, check and check. We spent a

few weeks driving minivans, Volkswagons and Volvos. A V70 much like what the Girlfriend now 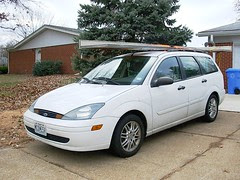 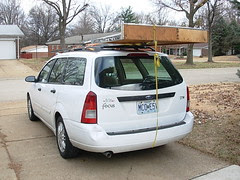 It was quite cheap for what it was. Low(ish) miles, luxury ride, good power and lots of cargo

room...but it had a "check engine" light on. The seller was a wholesaler who also sold to the

code checked. No thanks, we bid that particular Volvo fairwell and moved on. 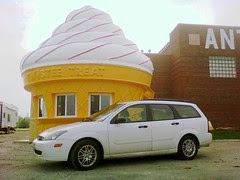 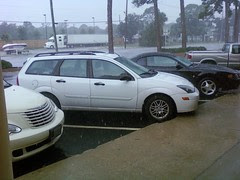 Good thing because maybe a week later we spotted Frank (with just under a 100,000 miles on

the OD) on a used car lot. I called my sister, who had been driving a Focus Wagon for a couple

of years and had worked at a Ford dealership as well, to get the skinny. Turns out, she

recommended them so highly that she was on her second! 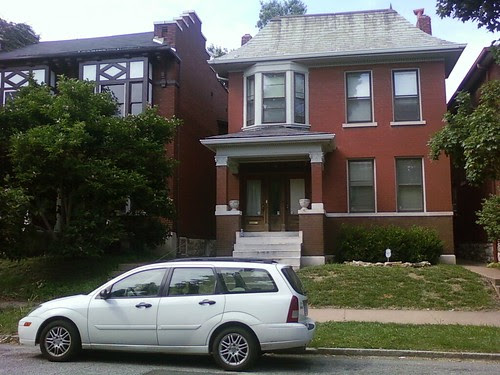 As long as the Focus is sporting the twin cam engine it seems like it'll run for a long, long time.

After some haggling and tears (tears are worth a few hundred at a used car lot, remember

that!), the papers were signed and Frank became part of the family. We didn't know we had

stumbled upon The Greatest Car In The Universe! 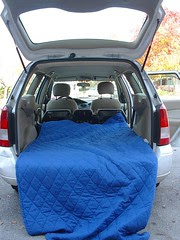 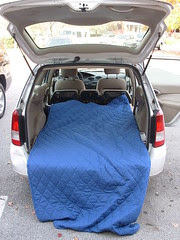 driving to and from work (2 miles street and 18 miles highway each way). Horse power for the 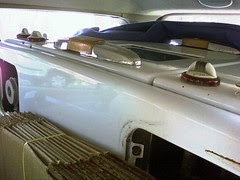 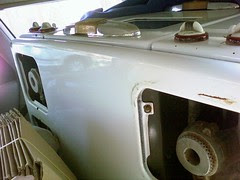 A '50s Tappan Deluxe gas range in the back of Frank. Seller thought it wouldn't fit!
Boring right? But I've been trying to find an equivalent or better vehicle for between 4 and 8

up as soon as they hit the used car lot. Replacement was a growing priority since poor Frank

has almost 200,000 (nearly trouble free) miles on the clock and a slightly blown head gasket

resulting in a minor overheating problem. I couldn't find anything that fit better than the Focus 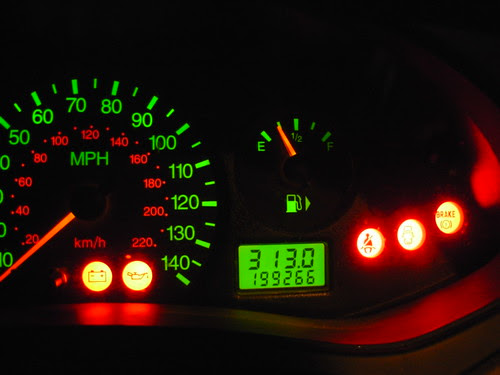 Frank.  199266 miles on the Odometer! 313 miles on 3/4 of a tank.
Too bad Ford chose to excise the Wagon from it's North American lineup. The European

Focus Wagon looks sweet. It's just not fair that we aren't getting that sweet ride here. Not that

would be showing up on the used car lots at prices that we could afford. The five door hatch

back is as close as we get for now. And it's pretty close. What it lacks in cargo capacity it

makes up in horse power (since it gets as good or better MPG!) and rakish good looks. I'd still

rather have the wagon. It's so pretty. Oh well, maybe in a few years. 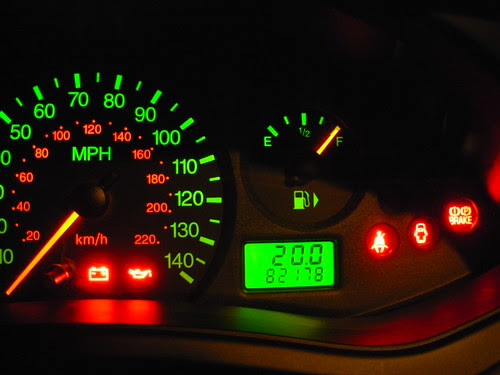 Frank Jr. 82,178 miles on the Odometer.  He's just a puppy!
Until then we've taken delivery of Frank Jr.! Franks younger brother is in fact an '04 as

apposed to Frank (an '03). Both are ZTW trim packages which means a twin cam engine in

either car. Frank Jr. has a slightly larger and more powerful engine so I'm eagerly anticipating a

chance to kill a couple tanks of gas to see what I can squeeze out of them. I REALLY wanted to

stick with the 2 liter Zetec engine but it wasn't offered in 2004. Finding the exact right car is

hard, real hard when you have very specific wants and desires. Low(ish) miles was a priority.

miles, a dented door and an asking price of $3,200. Too many miles. Then there was another, 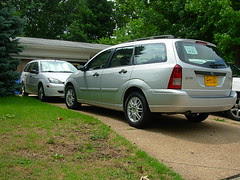 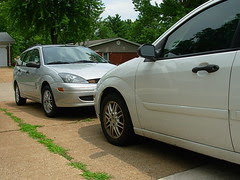 Focus smootchies.
We went to look at a 2002 with only 67,000 miles that we were pretty much ready to buy but

gold. It seemed like just an OK deal so we still wanted to see the '02 with fewer miles. Turns out

it was gone. Already sold. Duh. Of course it was. Broadening our search outside of craigslist

snatched up. And snatched up quick. One dealer told me that they had sold their wagon within

hours of dropping it on the lot! Hmmmm, no more messing around. 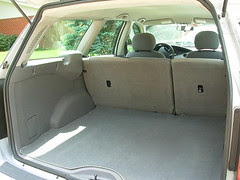 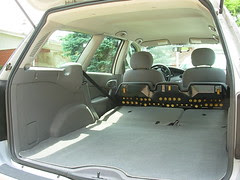 Serious cargo room!
We found Frank Jr. (with just over 80,000 miles on the OD) on Autotrader or some such

website and decided to go take a look at it yesterday. As you know, I had scheduled an

appointment to shoot Dan and Tiffanys joint yesterday and had to drop by there first. We

almost didn't make it to the dealership. 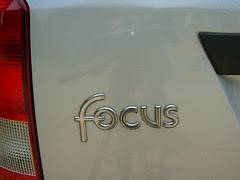 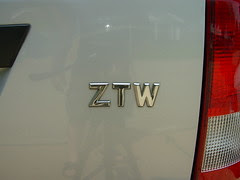 We walked in a half hour before closing. They gave us the keys and let us go for a quick drive.

We pulled back on the lot 5 minutes before closing and asked if we could still make a deal. An

roadtrip to get to know him better! 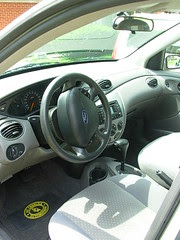 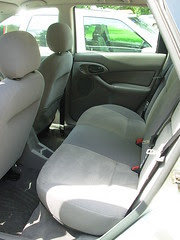 Email ThisBlogThis!Share to TwitterShare to FacebookShare to Pinterest
Labels: Before and After, Collection