Just A Little More Loot From The Weekend Before Last! I Know...So Much Booty From ONE Weekend! Status: Smalls. 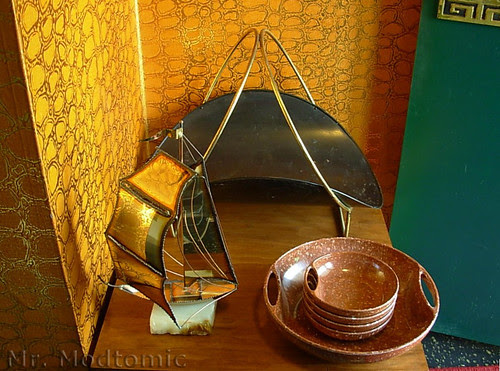 I was gone most of last week so I took a bunch of pictures and uploaded them to Flickr before I left.  This let me keep posting daily from "the road"...even though it wasn't really "the road" since we flew.  I'm so not a fan of flying.  I can't bring anything with me to sell or anything with me back home!  It's like being bound and gagged!

Thank goodness I had a really good weekend before we left.  It was like loading up on carbs

before a marathon!  And while I wasn't able to bring much home physically...I did take a bunch

of pics to share with ya later.  One particular item almost made me cry to leave behind...and

made me consider renting a truck to drive home!  I show you it later though.  This post is about

some items acquired BEFORE we left! 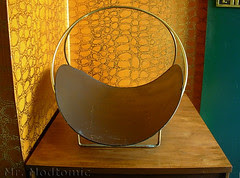 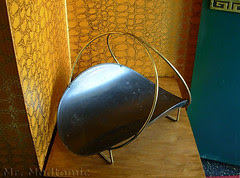 Yup.  I found another magazine / log rack.  I've got to clean it up and maybe shoot it with some

paint to pretty it up but I'll be offering it on craigslist as soon as I do.  It's not real flashy but it's

more vintage modern appropriate than most anything you'll find new at the big stores.  Maybe

I'll bundle it with some mod fireplace tools that I have available too. 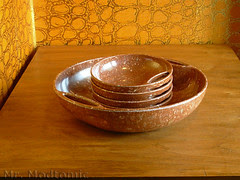 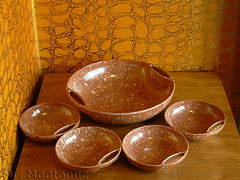 with Nick.  It looks unused.  I'm loving it!  I know I'm treading on the Girlfriends turf here but

she's glad I snatched it too!  It's a little darker /  richer color than the ice bucket I posted a few

weeks back but it's close enough. 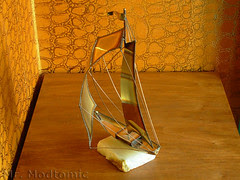 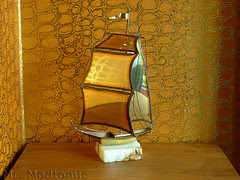 Columbia Mo. to pick up the Drexel dining room set.  You can just see the signature on the lower

rear of the stern sail.   I thought it might be a DeMott but the signature doesn't match.  I've no

idea who created this.  I certainly can't make heads or tails of the siggy!  The sculpture is pretty