Hit The Estate Sale Circuit This Morning. Picked Up A Nice Set Of Folding Chairs And A Coaster Set. Status: Rainy Day Scores. 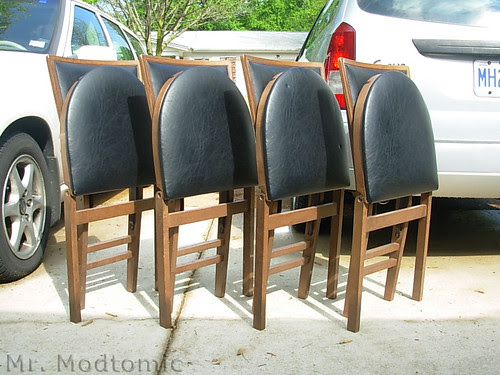 I've seen lots of these folding "card table" chairs at estate sales and thrift stores over the years but haven't ever been possessed of the desire to buy them...until this set!  These are quality and have a certain style to them that elevates them above just folding chair status.  But that's not all I picked up...and it wasn't what I sat outside the sale all night for.

Yup, Mr. Modtomic pulled an all nighter.  I showed up stupid early only to find myself second in

line to a Mr. Modtomic reader who purchased and refinished (to amazing effect) a danish lounge

chair from me.  We were both there for the same thing...sorta.  There was (and probably still is)

a Drexel Declaration dining set at the sale.  The pictures on the web were so poor that I almost

didn't recognize the set...and I was counting on no one else recognizing it either!  But an avid

reader did, and got there even more stupid early that I!  The good news was he was really only

after the buffet / credenza and I would have been happy to leave with just the table and chairs...

for the right price.  We both left empty handed.  The sellers wouldn't split the set and had priced

it far above either of our comfort zones.  I'm hoping that my new friend is able to go back

Sunday and get it for a better price.  I'm pretty resigned to be out of the running and am not too

dissappointed as I just picked up a Drexel Declaration set a few weeks ago.  There's always

other stuff out there begging for my attention! 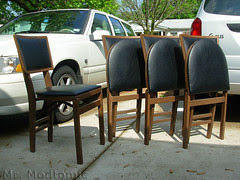 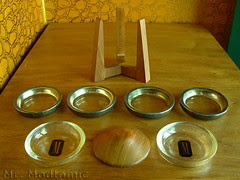 walnut holder with cap.  Not anything I would have sat up all night for but at least I was hanging

out with good company.  Nick even showed up at about 5:30am thinking he might throw his hat

in the ring for the Drexel set.  Lucky bastard got to go home and hit the hay instead!  But he did

show of a pretty cool Davenport style sofa that he is selling on criagslist.  It does have that thrift

and it looked really nice.  It's got the Modtomic seal of approval!  I recommend checking it out

if you need such a piece. 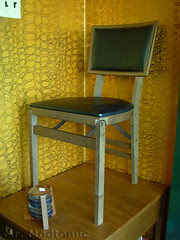 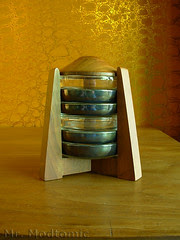 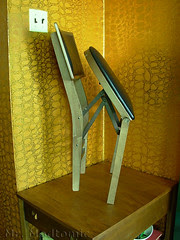 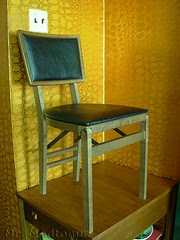 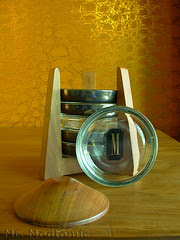 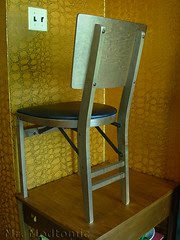 So I stayed up all night for the above lot of loot.  At least I didn't leave totally dejected.  I really

dig the folding chairs.  I'll put them on c-list but I'll be glad to keep them as extra party seating!

They are so compact yet as super sturdy as non-folding chairs!  And coasters...don't get me

started on coasters again!  No idea what the "M" in the movie ticket shape thing is though.  It's

only on two of the glass coasters and the other four have silver rims like Dorothy Thorpe glasses.

Anyway, after taking a long nap I did manage to further salvage the day by scoring some good

stuff off c-list and at a little junk shop on the way home from that.  And it stopped raining.  Nice.