The Pattern Is Called Calligraphy. It Strikes Me As Looking Both Organic AND Atomic At The Same Time. Whadoyathink? Status: Available. 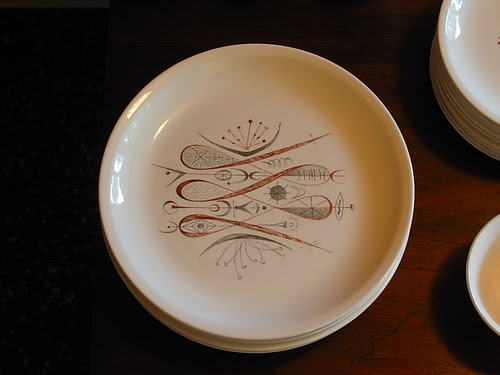 Did a little diggin' around and found out this pattern was designed by noted WPA artist Anton Refregier! I believe the Girlfriends father published a book on WPA writers a few years ago. He's been itchin' for me to gift him something interesting from my huntings and gatherings. If I can't find a new home for these quickly, maybe he'd like the set.

I snatched up this set last Saturday after I dropped the Girlfriend off at her schools graduation.

I was in St. Charles and had a few hours to kill so I decided to check all my favorite "traps". I

always forget that the Salv. Army stores are closed on Sunday so it was fortuitous that I made

my rounds Saturday. These were not found at the Salv. Army thrift store though (shocking...I

know!) but at the Goodwill just a few blocks away. They were still on the "Farm Fresh" cart and

hadn't been placed on the shelves yet. I boogied back up front and grabbed a cart to load 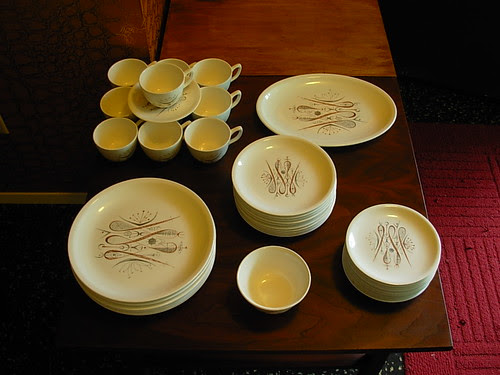 That's a lot of dishes. 42 pieces to be exact. The thing I hate about buying dishes is the

ridiculous amount of effort involved in wrapping them up to get them out of the store! I can just

feel the other customers behind me rolling their eyes. I hate the inefficiency of it all. It really

drives me nuts. Sometimes though you get a checker who really knows their stuff and gets it all

packed up safely and super quick, but I still kinda dread taking a big set up to the counter as

between. Most of the time my brain is screaming at the clerk; "If you'd just...You might

wanna...Perhaps if you'd try...Just let me do it!" But I never say anything. I try to be good. 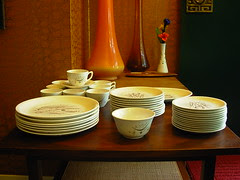 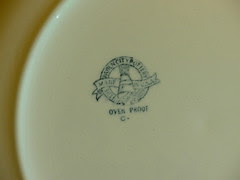 ALSO produced the Biscayne pattern? It's true! I only found this out while trying to ascertain

the name of the pattern (Calligraphy) of these dishes. Isn't that weird? How have I never run

across a piece of Biscayne by Paden City Pottery? I got tons of the stuff! 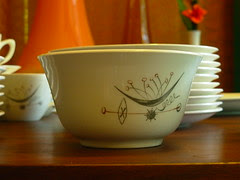 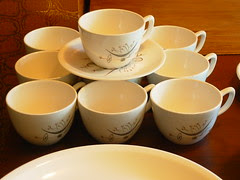 Another mystery, how did I end up with 10 teacups and only 1 saucer? Freaky. At first I thought

all those smallest plates were saucers. Nope, not a one. How the heck does someone loose or

break all the saucers? How the heck does one find a bunch of replacement saucers for such

an obscure and dare I say "rare" dining set? Hmmm...maybe someone will relieve me of them

and tackle the problem themselves!
Posted by Mr. Modtomic at 2:33 AM