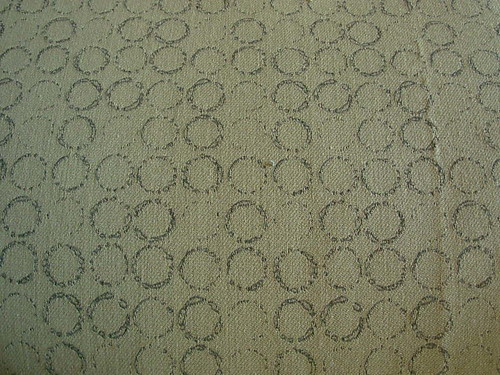 While I was out messing around after the estate sale bust Friday morning (huh, two busts in a row...suck) I decided to stop by Garden Ridge to go through their fabric remnants. I was actually looking for some black or cream colored vinyl for the Mr. Chair, but then while perusing the vinyl I realized that I'd have to buy it off a roll or bolt or whatever because the remnants are all folded into squares and I'd never be able to get the corner creases out. So I found some cool looking upholstery material instead!

Then I got a wild hair up me bum and decided to tackle the Ottoman. It started innocently

enough with me just laying the material over the ottoman to try to get an idea if I'd like it. Then I

thought, maybe I should take the pad out of the shell so I can wrap the material around it and

set the pad back in the shell to get a better idea of what it'll look like. It snowballed from there. 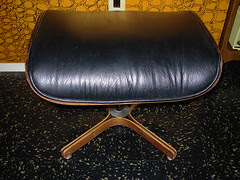 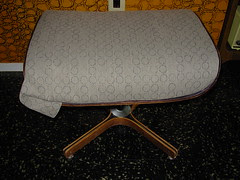 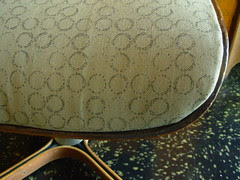 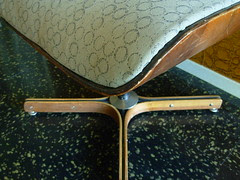 Here I've just put a few staples in just to get a little better idea of what it'll look like finished.

Seemed like a harmless idea at the time. Pphhhfff...whateve' Three hours later... 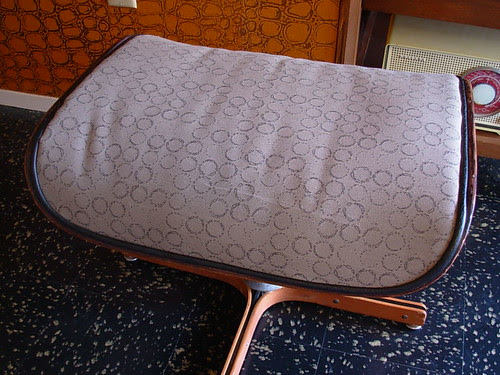 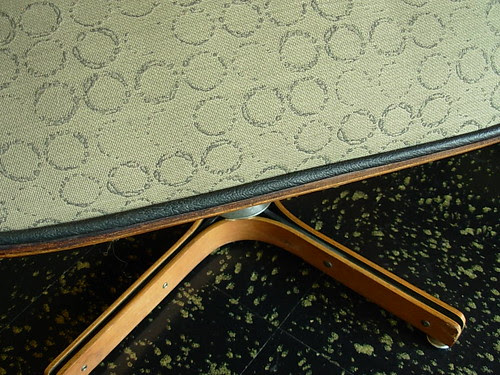 Note that I reused the piping from the original vinyl. I think it works nicely with the fabric. And for

real...it was so much easier than making new piping. Is anybody embarrassed for me? Does it

look just Soooo Ghetto it makes you cringe? Lemme know, I could use the objectivity and I can

still take this all back apart pretty easily.
Posted by Mr. Modtomic at 12:19 AM

Email ThisBlogThis!Share to TwitterShare to FacebookShare to Pinterest
Labels: Before and After, Chairs, Eames