Feeling Kinda Basic Today. Thought I'd Share These Hard Working Blue Collar Bar Stools With Ya. Status: Available...Dependable...and a little Sexy in a "workin' on the car" sorta way? 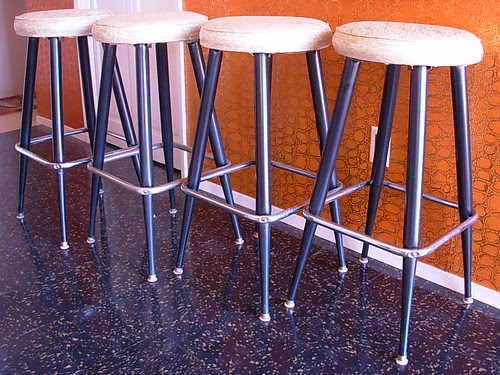 So maybe they ain't from some frozen European country and they ain't sporting some fancy pants accent...but when your kid runs his (or her) Tonka truck into them, they ain't gonna cry to Momma. Good Ol' American Steel, baby. Remember, it's the backbone of the Nation.

Got ya feeling patriotic yet? Or are you just giggling at my lame attempt? But for

real, not everything cool or "easy on the eyes" (I hesitate to call them beautiful) is

Scandinavian inspired or Danish Modern derived. How come we never use or hear

the term American Modern? Is there such a thing in these things we love? Would

these stools qualify? They have a sorta Space Age thing in the tapered and

splayed legs. Steel, Chrome and Vinyl...doesn't that pretty much describe every

American car from the 50's and 60's, and weren't they just about the most

American and Modern things you could buy? Does this sound like a rant? How 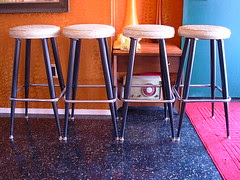 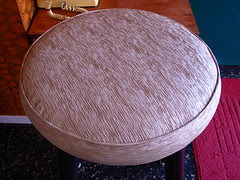 Anyway, I've got an ad up on the New Orleans Craigslist as we are heading down

goodies with me...like a mid century Santa...but one that gets paid for the

presents. I had a buyer ask about the Pink Bar Stools but balked at the price so I

be interested in these instead. Unfortunately she already has a set similar to

these. No sale. The good news is that, since I then already had them out, I could

proper. So here they are and yes, they are available! 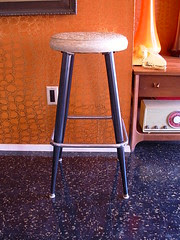 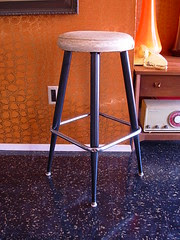