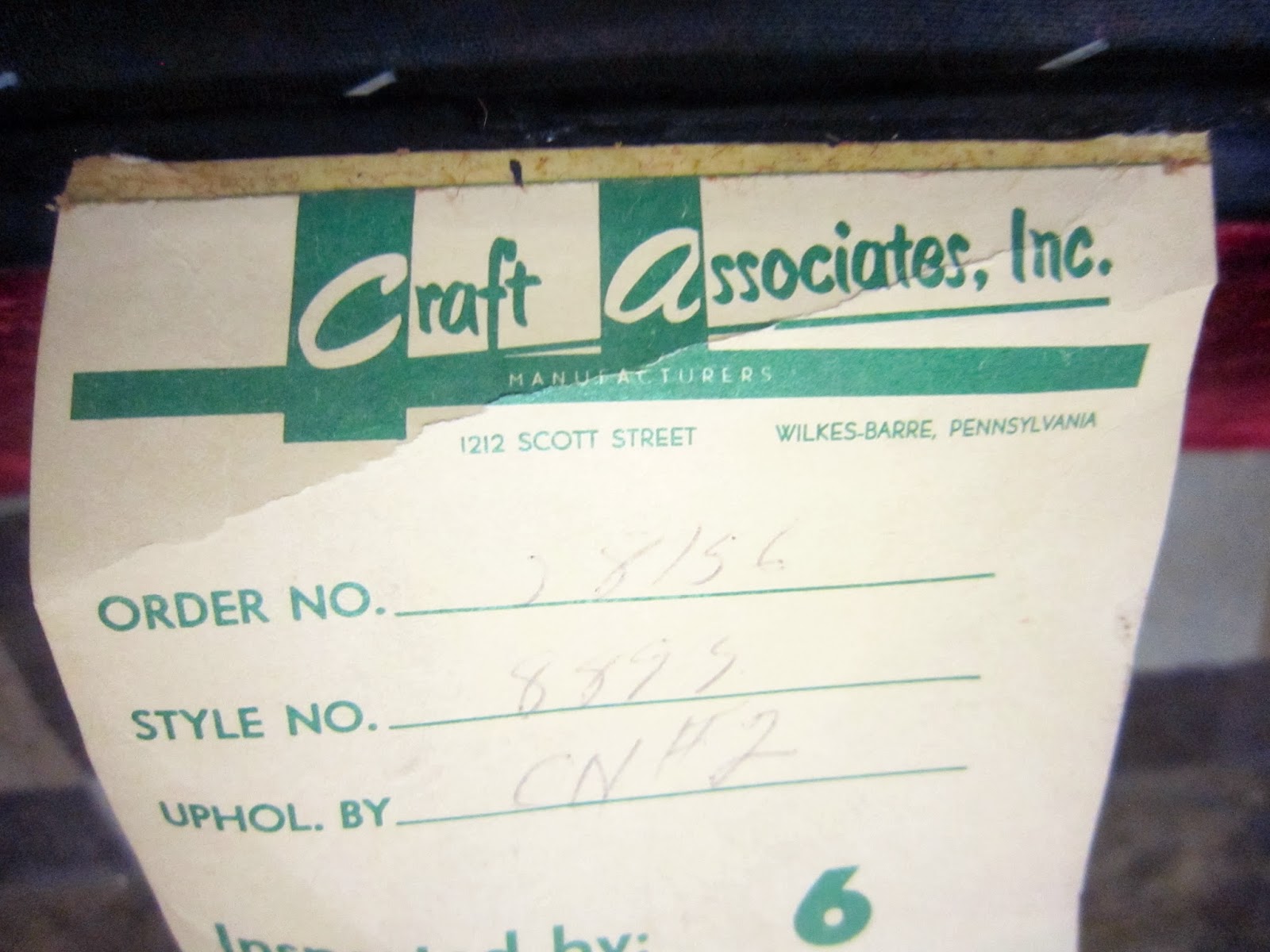 Yeah, I know, a saying THAT stupid/corny could only be found on a t-shirt. And yes, I did have that shirt and wore it more than once. (Underneath something, of course) Hello Modtomotrists. My name is Jeff, and I'm an upholsterer. An upholsterer who loves mid century design, and attempts to give new life to vintage furniture that may otherwise end up in a landfill, or worse yet, a man cave.

So, aside from the cornpone saying in the title, I will be documenting the reupholstery of a vintage

platform sofa designed by Adrian Pearsall for his company Craft Associates. And although there will

be no near-death experience, there will be plenty of (probably) carcinogenic dust, splinters,

sharp-ended tools, rusty broken staples, and a trip to the urgent care clinic. 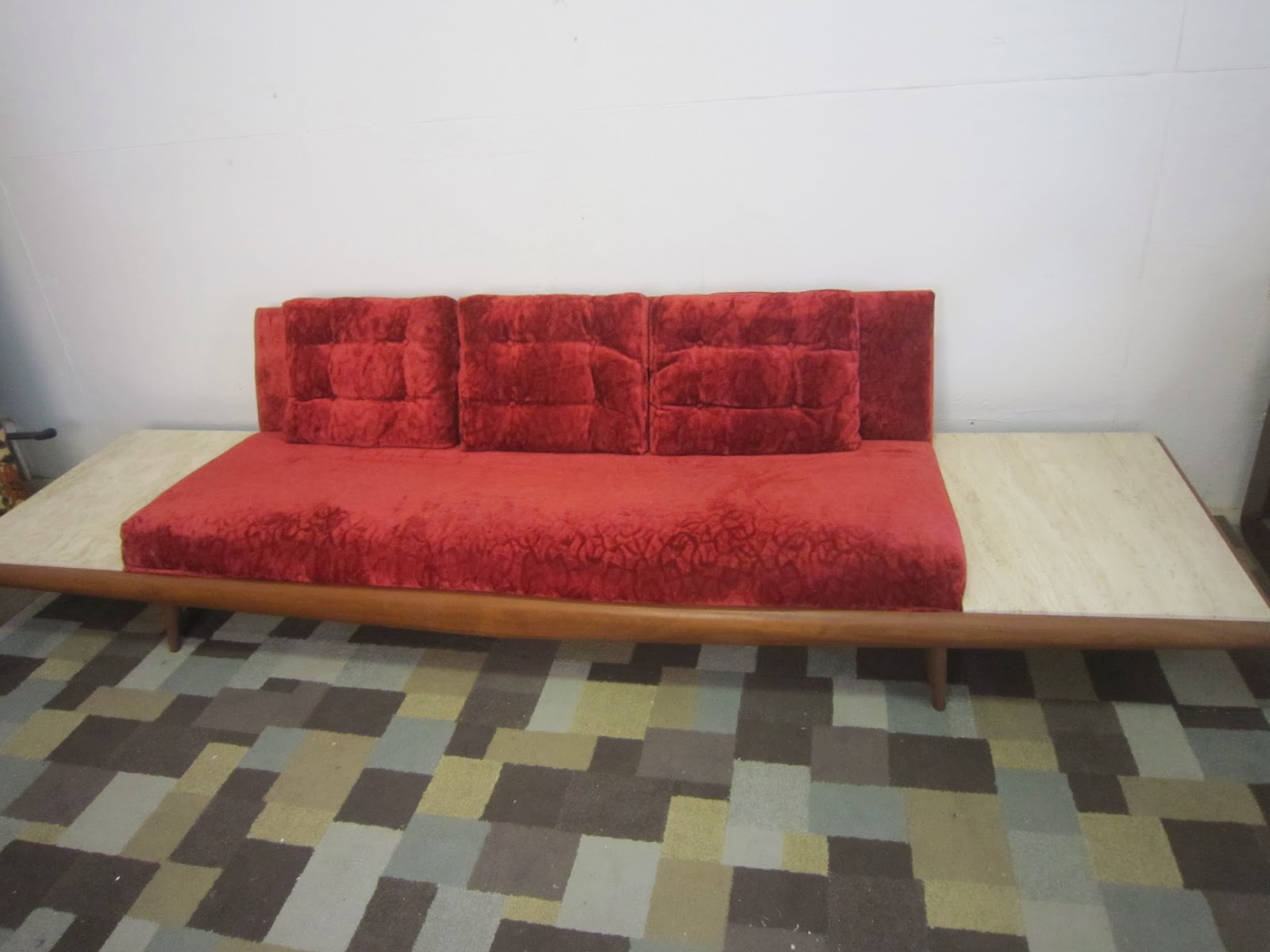 This is the patient, model 889-S, measuring 10+ feet in length with Italian travertine end tables, and

oiled walnut base and legs. At a glance it looks great, if you're into funky, flowery red velvet, but a 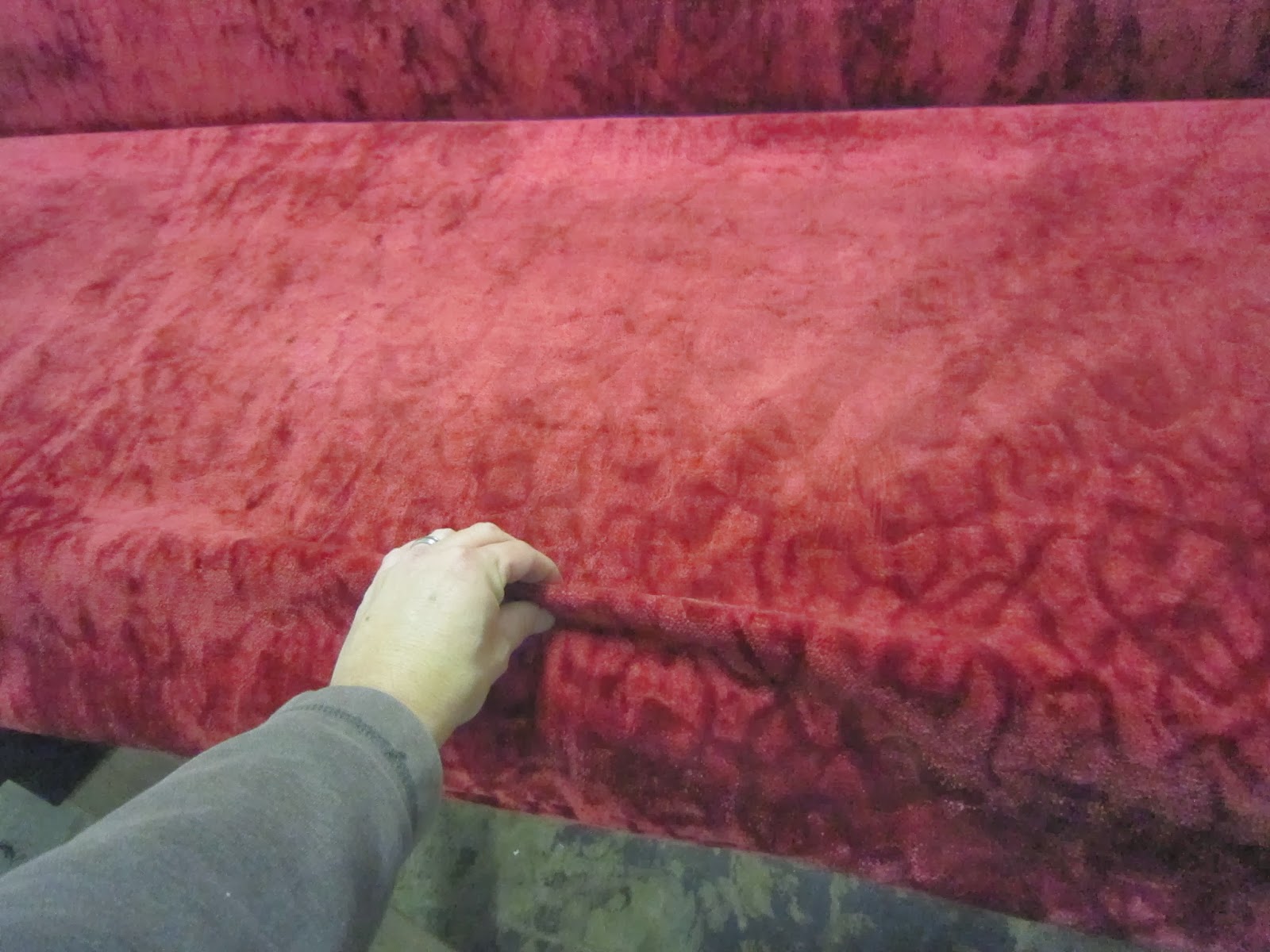 Why is the fabric so loose on that seat you ask? Is that the way its supposed to be? No. The foam

padding along the front of the seat has deteriorated past the point of hardening, and turned to powder.

This is pretty much the standard for most upholstered furniture from the 1950's and '60's, as latex

foam replaced "hog hair" and cotton as commonly used padding. Although most latex foam has held

up for decades, when it goes bad, things get messy.  Lets take this thing apart so we can see how bad 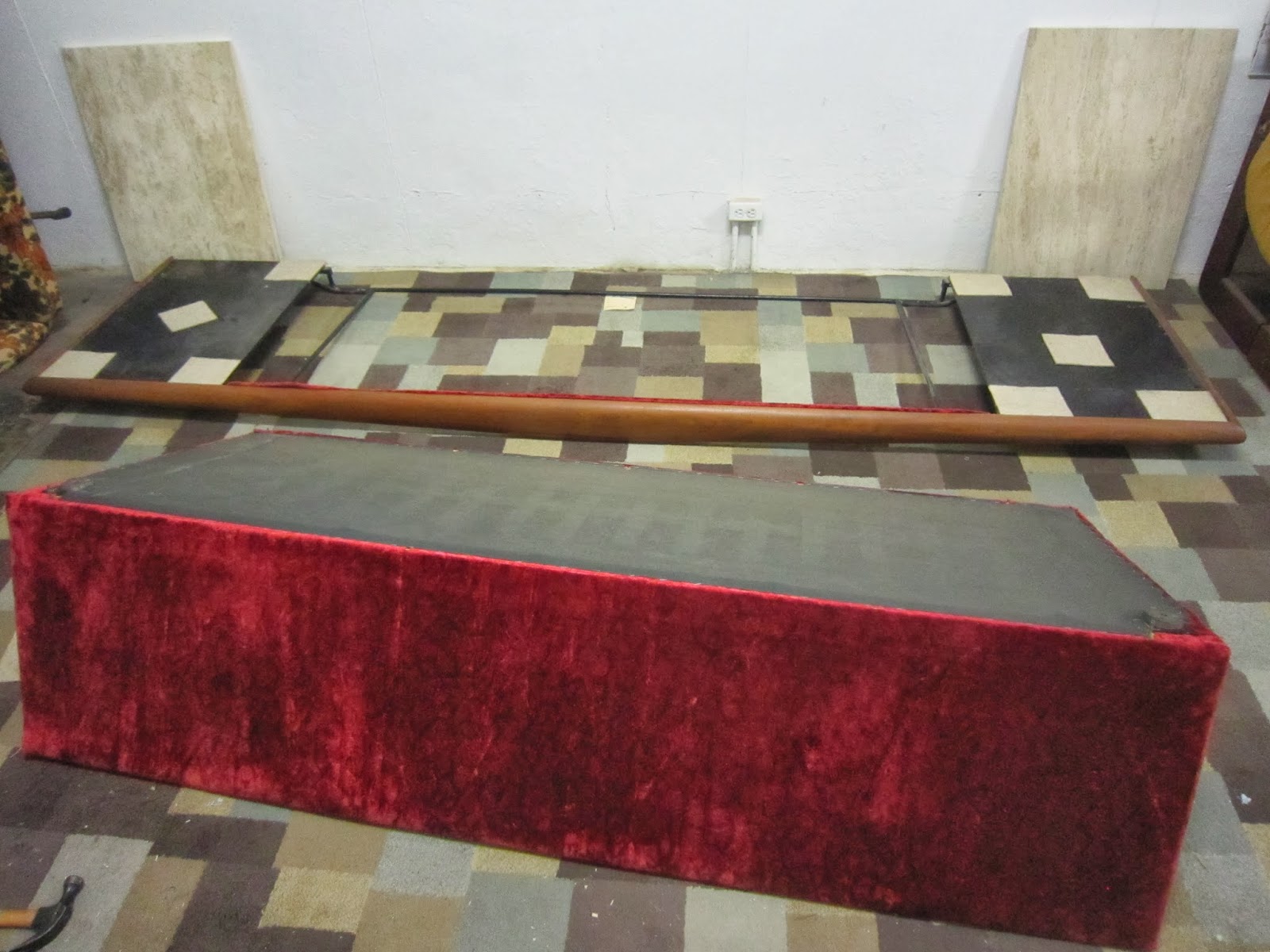 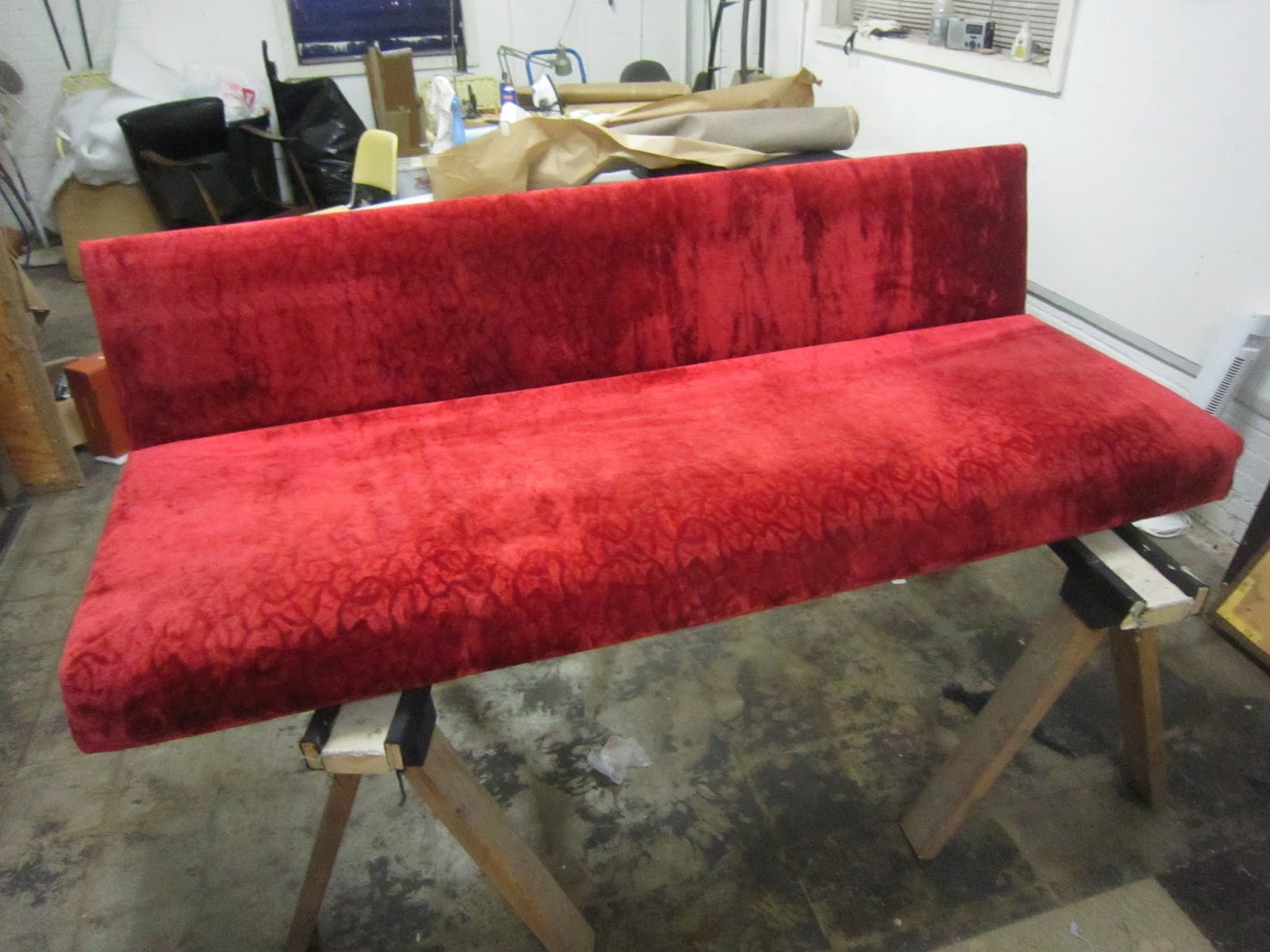 First we need to get the upholstered seat and back section off the base. It's attached with a number of

screws, and four bolts that fit through the wrought iron frame. once they are separated, we are left

with a more manageable 75" piece. Lets pull staples!  If any of you plan to try a DIY upholstery

project, or have tried before and discovered how much this part sucks, go get these tools. 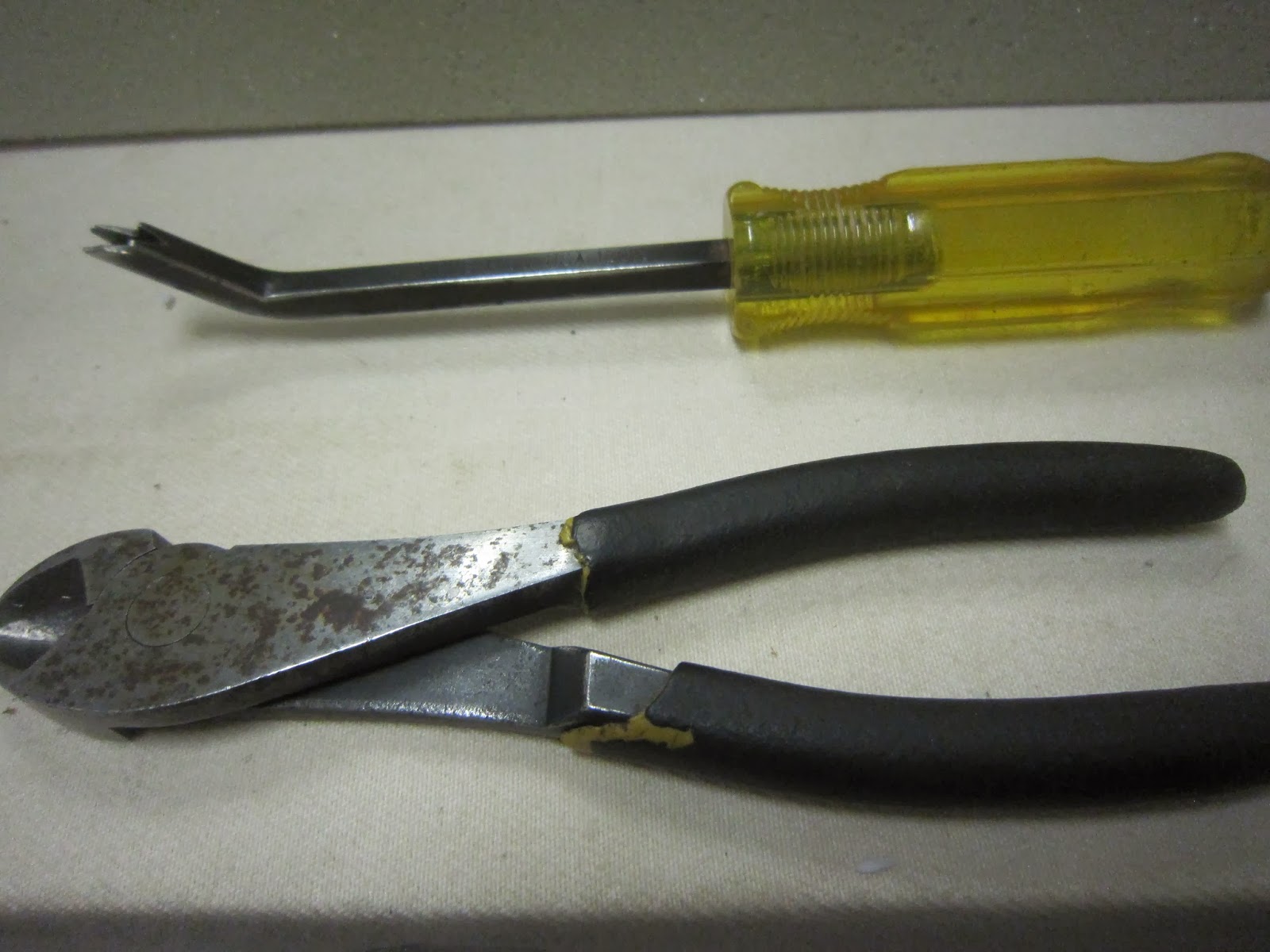 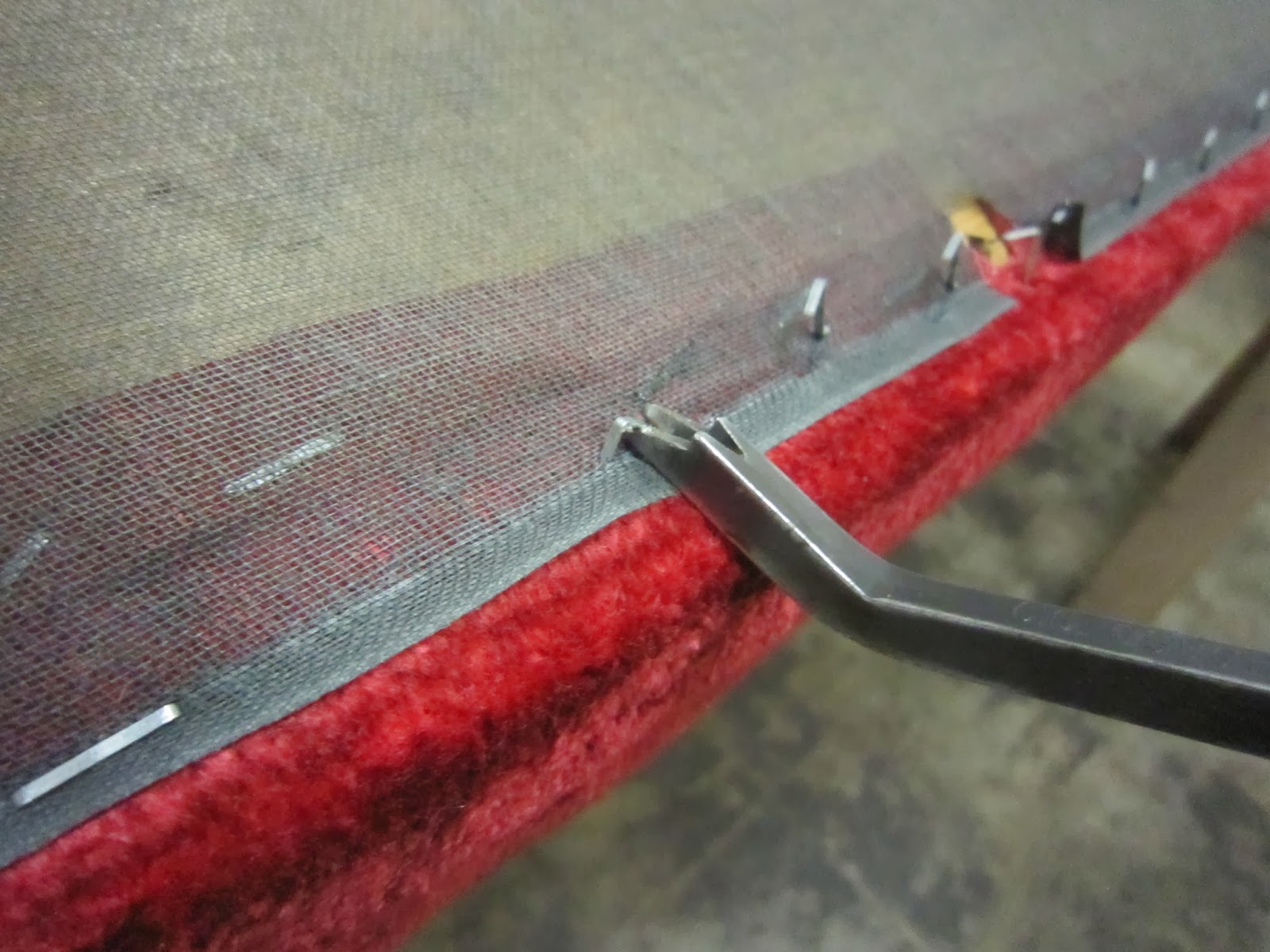 I'm not gonna lie to you, pulling staples still sucks even with the right tools. Just a bit less. The

yellow handled tool provides a sharp end to dig under the staple, and leverage to lift it. Then it's just a

matter of pulling the lifted staple out with the plier/sidecutter.  Now we are going to remove the dust

cover (that black meshy fabric on the bottom of most chairs and sofas), and un-stapling the seat and

back fabric from the frames bottom. This usually involves pulling hundreds of staples, but if the old

fabric is thick enough, you may be able to get ahold of an edge and pull the fabric off along with the

staples. Those are good days!  We're gonna set down the puller and pliers for now, go put some

bandaids on, and come back later to pull that fabric off and see what's underneath.

Email ThisBlogThis!Share to TwitterShare to FacebookShare to Pinterest
Labels: Adrian Pearsall, Before and After, How To, Sofa, Swift, Vintage