Space age Futuristic Dinnerware from the past! Nothin' says, "Woman, where's my Meatloaf?" like Franciscan Starburst...and Mr. Modtomic is obviously hungry! Status: Avail...Ha Ha Ha, oh..that's a good one! Whooowee! I kill me. 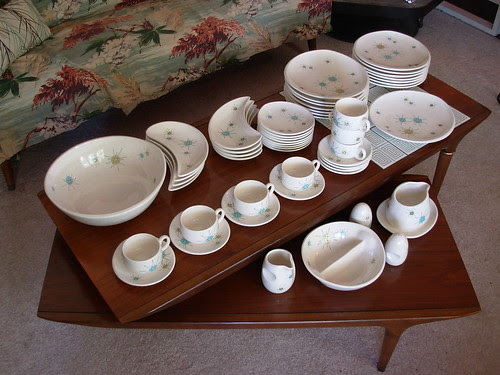 This Franciscan Starburst set started with a sizable lot found at a local Goodwill thrift store. 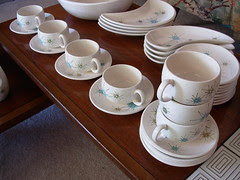 There were a few chipped pieces but they have all been replaces. There were 7 of the so

coveted "eyebrow" side plates but one was chipped. I've since bought 2 more off Ebay. 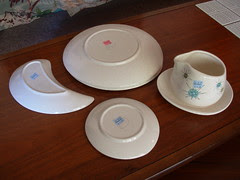 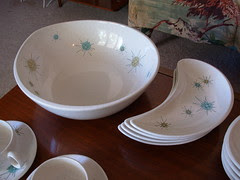 The large salad bowl, 1 dinner plate and the salt & pepper shakers were also found on Ebay. 6

more dinner plates, the divided serving bowl and the creamer were partial payment for the

Dorothy Schindele desk that a buyer from Knoxville TN drove out to pick up. I've left the actual

goodwill price tags on the thrift pieces. You can see how good they looked even at the store as

I have never even cleaned them! 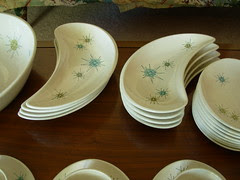 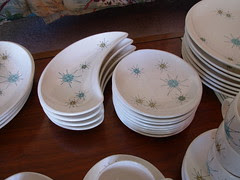 Funny story about that thrift purchase. The Goodwill here will put the newest items out on the

floor on these large carts before placing them on the shelves where they belong. I guess if

people like me pull items off the rack to buy, then that is one less item they have to then

"place". Good idea! Anyway, I spotted these dishes on the rack and thought, "Wow, those are

pretty cool." But I didn't know what they were. They looked so nice that I thought they were new

or at least newish. 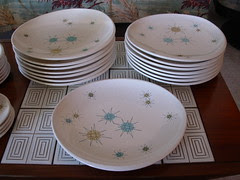 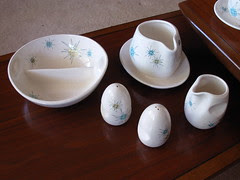 I was thinking they were likely from Target or something and as a result, I didn't think they were

worth anything. I had the Girlfriend take a look to see what she thought. She was like, "you

obviously like them even if they aren't vintage...you should just quit Hemming & Hawing

and just buy the D*mn things". Right, of course sweety. Done. Yeah, almost passed these up.

Can you imagine? A couple of weeks later I was browsing at TFA (The Future Antiques -

at $25 each! AH HA! Then did a little internet research and found them to be highly collectible.

Sweet. You have no idea how many times the Girlfriend has brought this little story up.

I've acquired even more since this post...check it out! 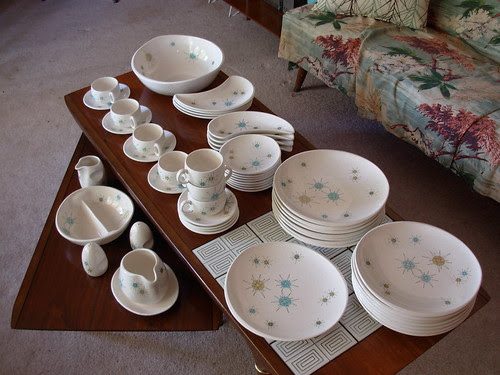