What a Picture Perfect Day here in St. Louis! Glad I have so many Cameras! Status: how do I hook these to my computer? 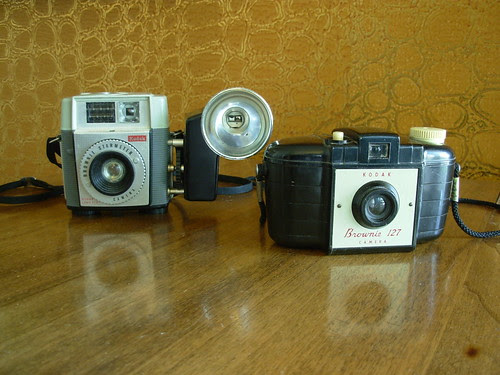 The last time I dropped some pics here of my "Proto" camera collection I said that I needed a camera that fits between a piece from the 1940s and the 1970s. I found a couple at the Wentzville Flea Mkt. a few weeks ago that fit the bill.

from 1960 to 1965. That covers the Sixties pretty nicely! Both this camera

though only from a handful of manufacturers. Eh, it ain't like I'm buying these

to shoot pics or anything.

thinking, takes care of the Fifties! It was produced in the UK and, as imported

to the US, was badged as a Brownie Starlet. Mine may be a UK market and

brought home from a vacationer or soldier as it isn't marked "Starlet". It's kinda

camera like this for just a couple bucks at the Flea Mkt!
Posted by Mr. Modtomic at 12:08 AM