Old School vs. New School A V for the Coctail Lounge Living Room. Status: Pop in an 8 Track and Watch the Party Break Out! 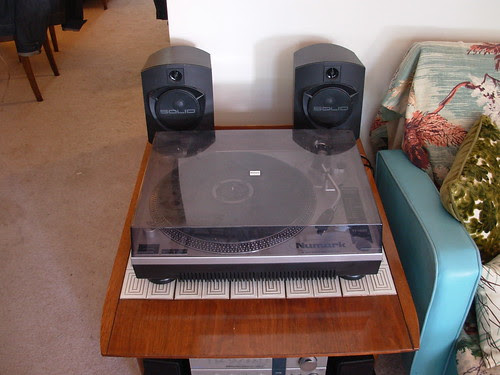 All of this is Second Hand one way or another. The Numark DJ turntable came

from the Goodwill for Twelve Bucks. It didn't have a needle but I had an extra 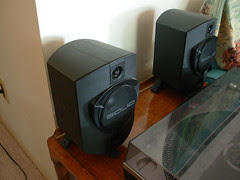 Salvation Army for just Twenty Bucks. I actually found another set of these in

white at the same store last fall and resold them on C-list for $85. These I 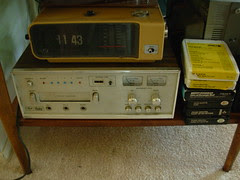 Yes, the 8 Track works...and sounds Really Really Good! Rat Pack anyone? Got it

at the Value Village thrift store down the street for I think Five bucks. I probably

paid more for the 8 Track tapes sittin' there! 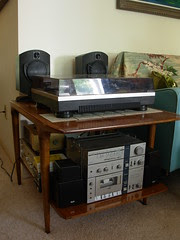 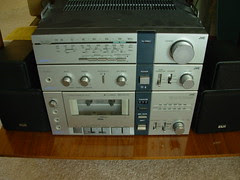 The JVC is actually a BOOM BOX! I had to take the speakers off cuz' the

suspension ring was rotten out of both drivers. I'm still looking for replacements

to restore the Boom Box to it's former glory. For now, it drives the Audio center

here. It's not terribly powerful but I'm not running a Discotheque or anything! 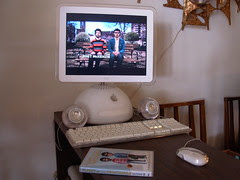 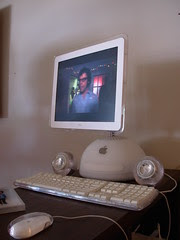 This fruity PC (get it...Apple?) was another C-list find. It ain't no giant screen DVD

but it looks cool and plays my movies for entertaining during Cocktail Hour. Of

course it plays CDs and MP3s as well. Plus, did I mention...it looks cool.
Posted by Mr. Modtomic at 1:24 AM