More Starburst....I Know, Right?!?! I've already fessed up to having a problem. Status: trying to elbow it's way into the kitchen. 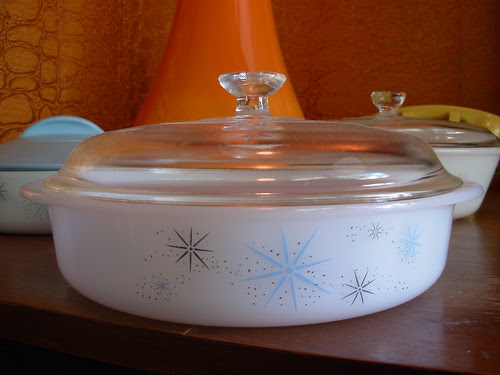 Ain't it so pretty though? Who could resist that charm? YOU? Puhlease...

These were all found at different times and different places. Except for the Blue lid, the

lids were found separately as well. Check out the subtle Starbursts cut into the clear

round lid! And how cool is it that it actually fit this casserole dish?  I found the first lidless

casserole at a thrift store up the street. I then found the clear lid about two weeks later

at a yard sale down the street from Fitanga (on Jefferson in South City...GO) where we

Then I found the oval dish at the flea mkt. and the lid to it a few days later at yet another

flea mkt. (wow, really?). The casserole and blue lid were found a couple weeks ago at

the antique mall down by Six Flags, where I also picked up the giant Witco piece.

estate sales and flea mkts I had never seen this "pattern" before!
Posted by Mr. Modtomic at 12:02 AM