The Ray Wilkes Chiclet Sofa - Installed. It's So Nice To Be Able To Share The Living Environment With You Again! Sure, You've Seen This Sofa Before...But That Was In The Driveway! Status: Home At Last. 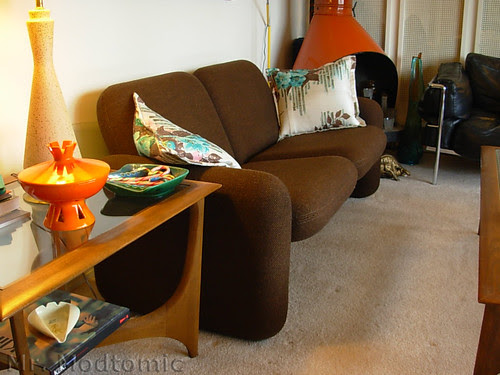 I gave you a brief preview of the living room / cocktail lounge area a few days ago just before our annual pre-Christmas party.  You might have caught a look at this sofa / love seat then or you might have seen it back in February just after I picked it up from a strange "estate sale". 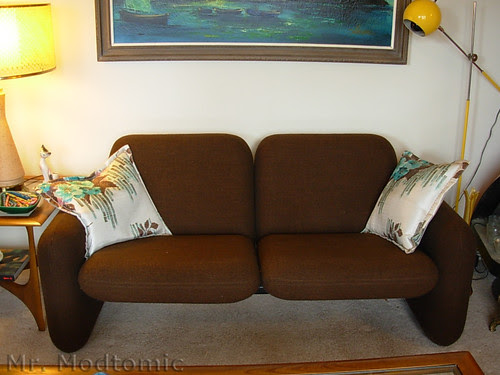 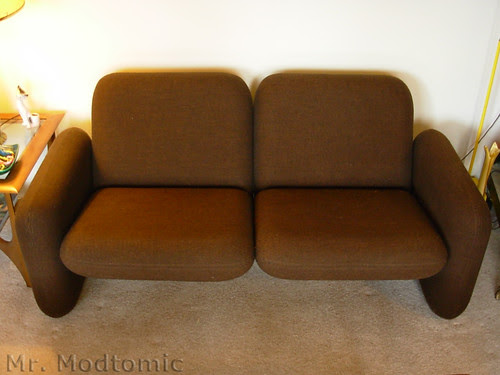 When I bought this, I will admit, flipping it was the first thing on my mind.  I thought I'd make a nice bit

of change on it...but then I kinda fell for it.  I seem to be maintaining a ratio of about 12 to 1 of finding

good stuff to finding the truly high end item.  I'm finding it kinda hard to part with the Herman Miller, 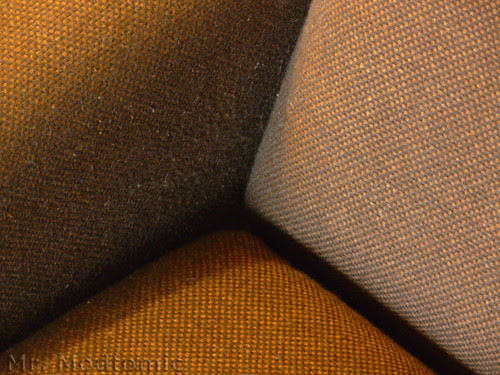 I gave this a pretty thorough cleaning when I got it home since it had an...aroma...about it.  Probably

30 years of cigarette smoke.  Got that out but I still need to de-fuzz the surface...someday.  C'mon,

it's 30 plus years old!  It's gonna have some fuzz.  Of course, this being higher end office furniture, the

cushions and upholstery are as good as new.  Actually, the cushions are so firm that some might find 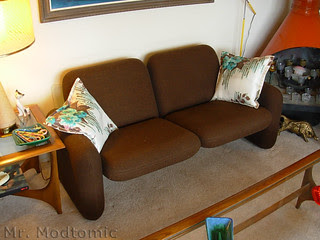 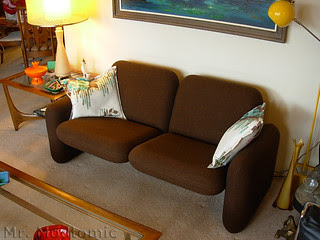 What do you think about the throw pillows?  I love the colors and subject matter on them with the sofa,

but I'm not sure if the sofa needs or even can stand them.  They do soften the sitting in the sofa though.

Makes the Chiclet a little less institutional and a bit more inviting.  Beyond it's strange and cool styling I

will say this about the Ray Wilkes Chiclet...it's got to be the strongest, most durable piece of furniture I'll

ever have owned!  I was hoping to be able to place this in such a was as to show off the back but that

would involve moving the orange fireplace...and that sucker's heavy, really heavy.  It's not just steel but

also has about two inches of concrete in the base.  They're both staying put for now!
Posted by Mr. Modtomic at 2:20 AM