Now Look At The Amazing Miracle My Buddy Dan Performed On This Broyhill Brasilia Dining Table. The Poor Thing Was A Mess And Now It's Beautiful! Status: Refinished And Ready To Go! 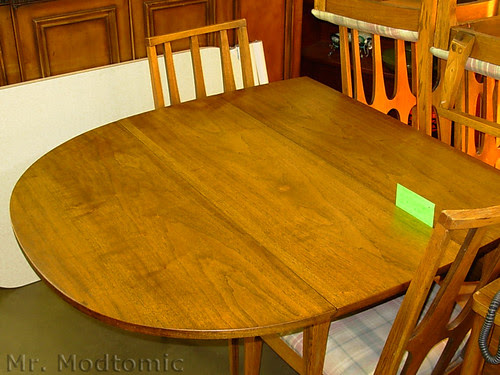 I've still got to find the pad set and the retrieve the three leaves from Dan as soon as he's done with the poly on them, but the Broyhill drop leaf extension table is officially available!  I've just managed to squeeze it into my booth at The Green Shag Market.  Can you believe it...I've doubled my space, and I've already hit the limit! 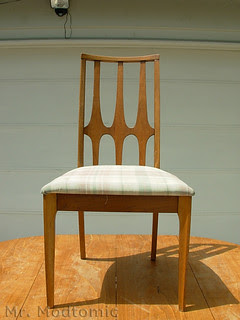 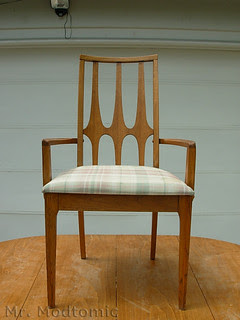 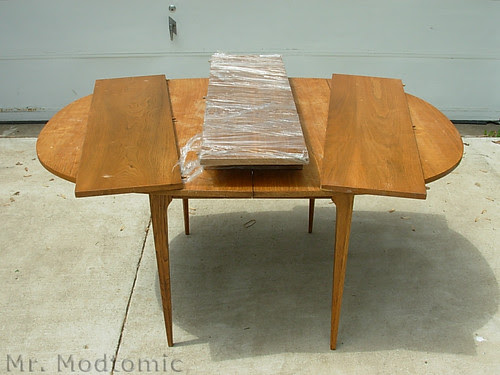 See?  It was a mess, right?  The previous owners had made a ham fisted attempt to refinish it themselves

and....it didn't work out so well.  I briefly thought about giving it a try myself but then I realized, I got a

guy.  I had a long Brasilia dining table in my dining room for a long time that had been refinished by my

buddy Dan and I knew he did great work.  It took a while but I finally realized that I should just drop this

off and let him work his magic! 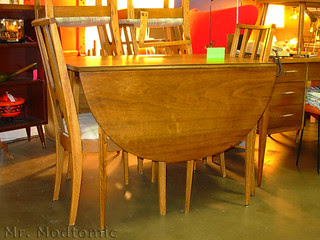 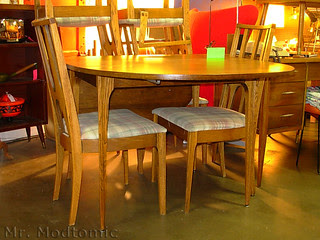 He did a really great job and now the table is presentable once again!  Upon picking it up from his joint

I immediately took it to the booth.  It's there Right Now!  You...YES YOU!, could have this in YOUR

dining room for your Christmas Dinner!  Throw that in your In-Laws face who thought you'd never

amount to anything!  Yeah...Do THEY have a rare, brilliant and beautiful Broyhill Brasilia drop leaf 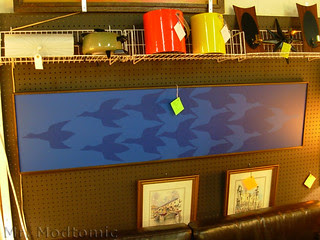 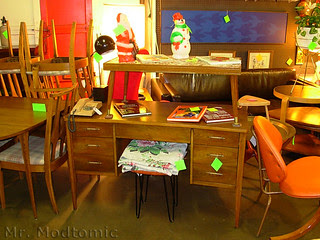 While at Dan's place I picked up this lovely M. C. Escher style abstact modern print that he didn't have

room for.  I told him I'd sell it in my booth for him.  Looks good, no?  Looks great above that leather

sofa that I just managed to shoe horn into the space.  It'd look REALLY great above that leather sofa

shoe horned into YOUR space! 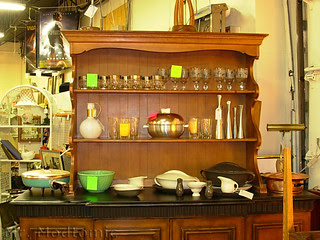 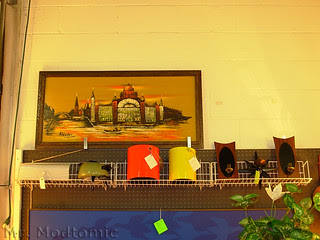 finally get some photos of the Brasilia dining table.  I dropped off a set of 8 Dorothy Thorpe style (may

be the real deal - no stickers or labels) straight side rocks glasses with silver rims.  I don't think that

eye since nobody ever polishes the silver plating) Chrome rims.  I like 'em both.  Buyers seem to like

'em too!  As you can see in the first photo above, I also brought in the set of 4 Jadite mixing bowls.

Surely you have someone on your Christmas list who is deserving of such a gift. 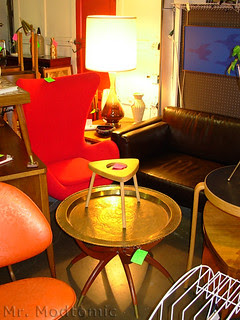 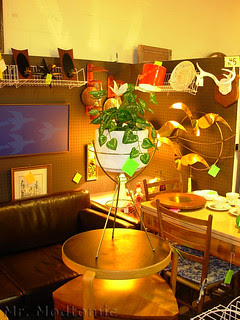 The big red "egg" swivel chair is in the booth and available as is the planter I featured yesterday.  The joint

is a little crowded and I'm a little embarrassed about that.  I just need to get down there for a few hours

and do some clever re-arranging.  It just seems like I'm always in a rush.  Too many plates spinning on 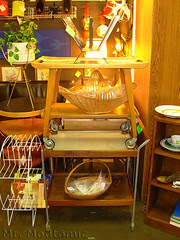 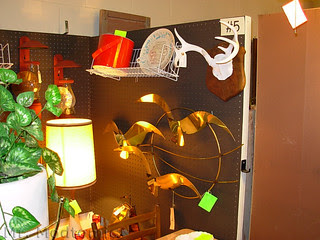 Yeah, that plant may be a fake...but it still brings a little ray of sunshine with it to the booth!  I had that

but that got snatched up too.  Gotta pick something out to replace it.  I've got too much stuff here at

home to have dead space in my booth!
Posted by Mr. Modtomic at 1:32 AM