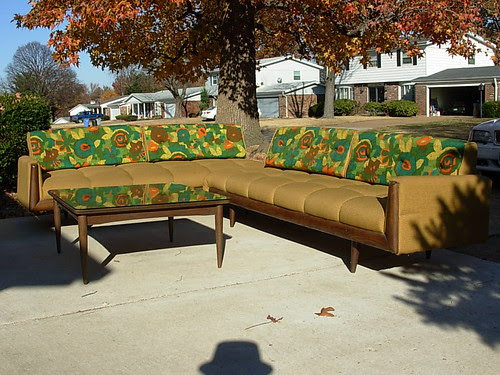 I had kind of a Crappy weekend at the (only) Two Estate Sales I attended this weekend. Snatching this up made up for it!

So, this little video shows one of the reasons I don't hit the estate sales like I used

to. It's just not really worth it so much any more. If a listing mentions, or HEAVEN

FORBID Pictures, anything like Eames, Knoll or Russel Wright anything...This is

how the sale starts. It's like a gun goes off and the Runners are out of the blocks!

This was shot on my phone Through The Window, so some of what you are

seeing is a reflection of some of us outside waiting and watching.


There were two Eames DCM chairs in there (@ $58 each!), a Heywood Wakefield

vanity pouffe and two sets of Russel Wright Stubenville that, by the time I got into

the house, were tagless (ostensibly "sold"). ::Sigh:: This is not fun. Went to

another sale and found three large serving pieces of Franciscan Autumn, so that

was cool. Anyway, let's check out the Sectional! 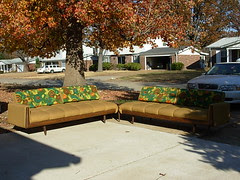 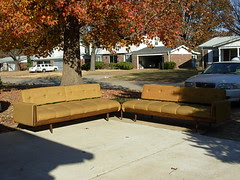 Here it is set up as it is likely supposed to be. There is a Danish style taper legged

table in the corner. It's nice but not terribly special with a dense particle board top

and laminate surface. At least it has a fitted glass top! I did a little measuring and

already in there. So it was a day of moving that out and this (plus a different

bookcase) in. You might say I'm kinda tired now. 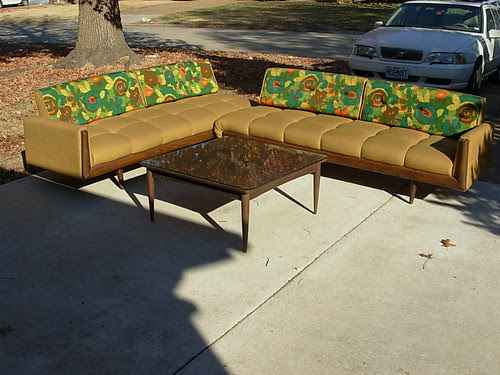 This is how I have it set up in the Spare Bedroom now. With the new bookcase it

just BARELY fits! I'll get pics up soon of the new setup. It got dark before I could 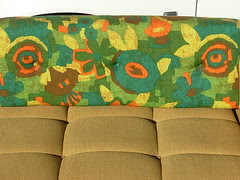 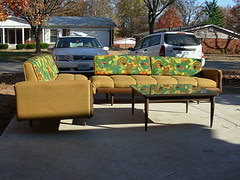 And here are some random "detail" pics! The Sofa Set was found on Craigslist on

Friday about 10am. I rolled out of bed, checked the "list", spotted it and had an

e-mail off within about 3 minutes! Once again, I offered more than asking and the

seller had gotten back to me within a few more minutes! I was ready to pick it up

then but the seller wasn't at the location of the sofa at the time. It took until this

morning for us to get our schedules working in sync.