Anybody Interested In Giving A Fellow Collector / Entrepreneur A Leg Up Via Kickstarter? Mr. Christo Is Hoping To Provide Budding Collectors With A Pocket Field Guide If Only He Can Meet His Investment Goal. Status: On His Way! 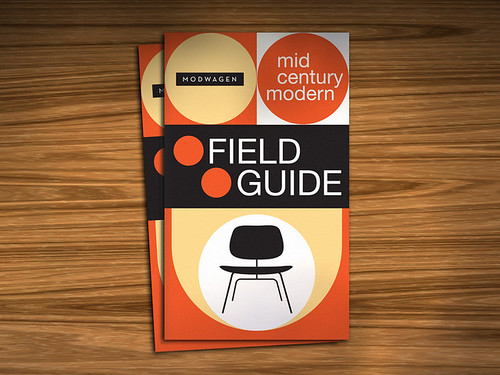 A few days ago I received an intriguing request via Twitter.  Christo (of Modwagen) asked if I might be interested in promoting his Kickstarter program here.  After hearing him out and realizing it was a worthy endeavor, I decided to do what I could.  Now it's up to you!

Occasionally I get requests to promote various items or contests here on Mr. Modtomic.  I'm not very

keen doing so as it usually involves me receiving some sort of benefit, and I will never promote

anything other than that which I believe in based solely on it's own attributes.  Plus, it's kind

of a pain in the butt and I don't really want to open that can of worms and stuff.  But I really like this

Field Guide idea and I've been a fan of Kickstarter since I first heard of it on NPR a while back.  So

with that, I will shut up now (as best I can) and let Mr. Christo Stevens have the floor: 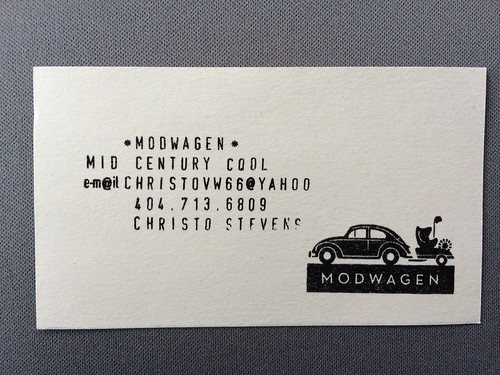 Three days ago, I launched my MCM Field-Guide as a Kickstarter project in an effort to raise funds necessary to print the final book.

The *modwagen* Field-Guide to Mid-Century Modern is a concept that's been rolling around in my head for a little over a year now, with my vision for the final product gradually being refined and modified.

I have all 128 pages completely story-boarded, with precise indications as to what each page will contain. I have one 'sample page' fully completed so as to be able to show those looking at my Kickstarter page exactly how the books' content will be arranged. Design, Layout, and content is 99.9% completed...and I would be thrilled to share any or all of the layouts/story-boards with you. 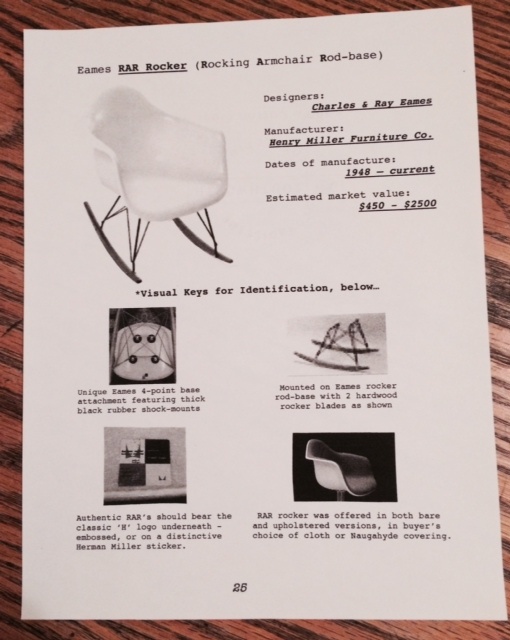 On a side note, my responses to this concept of a portable, pocket-sized, quick-reference guide for MCM & Atomic Era spotting have been overwhelmingly positive. My greatest hurdle now is getting the word out to as many of the the great folks in our 'enthusiast community' as possible. Big enough to be a possible deal-breaker. I'm really hoping someone like yourself with a prominent MCM blog can help me get some needed exposure for my concept (don't mean to sound so desperate...I'm just very excited about it!). 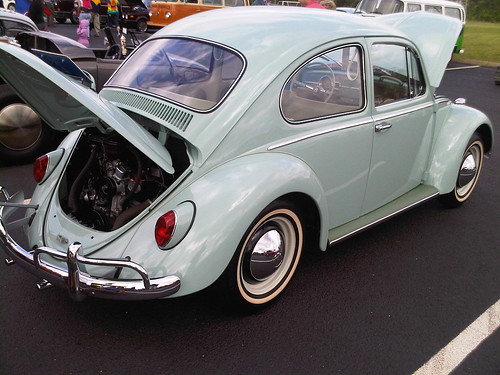 Here's a little background on the *modwagen* moniker. While registering to open an Etsy shop, I was faced with an unexpected question: "Name of Your Shop?". Not particularly difficult, granted, but I was not accustomed to referring to myself as anything other than the names on my birth certificate. Nonetheless, I had to come up with something...Etsy needed me to name my shop - I was happy to oblige. 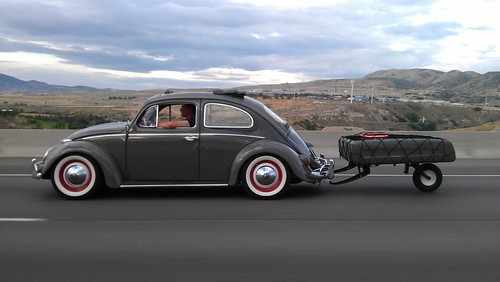 From the outset of my foray into dealing in MCM/Atomic, I'd had this idea. Get up early on Saturday mornings, hook up the Allstate single-wheeled trailer to my original paint 1966 Sunroof Beetle, load the trailer with several of my best MCM pieces, then head to downtown Atlanta to sell them, Pop-Up-Store style. The name *modwagen* now seemed perfect, with 'wagen' spelled with 'en' just as the Germans do. I did up a quick logo that reflected this personal dream, and there it was. And it has served me well. People respond very positively to it, but more importantly, they have very little trouble remembering it. Even though I kinda backed into it, I've been very pleased.

Why write the *modwagen* Mid-Century Modern Field-Guide? Allow me to explain the concept's origin. Anyone who has pursued any type of collectible will know very well what I am about to describe.

As an MCM/Atomic newbie, still green to designers' and manufacturers' names, logos, style names, specific pieces' names, etc, I found myself thoroughly researching the items I'd taken a chance on. I purchased things because my eye said yes, my gut said yes, and the price was right...usually. As time went on, I began to realize that my knowledge was expanding not only of the purchased pieces, but I'd also been 'accidentally' accumulating valuable info on a whole range of MCM/Atomic stuff. Suddenly, it seemed, I was recognizing stuff all over the place - stuff I would've walked right past 3 months earlier. Bonus!

Continuing deeper and deeper into the MCM community, I began to notice a distinct pattern among my customers. I would say 90% or more were/are younger folks - 20-somethings and 30-somethings. The vast majority of them were relatively new to MCM and therefore, still learning basics. They almost always asked lots of very earnest and sincere questions, which I was more than happy to answer. Surprisingly, I was usually able to confidently answer them, while to myself I was wondering how in the heck I knew! It was that accidental-learning I mentioned earlier. 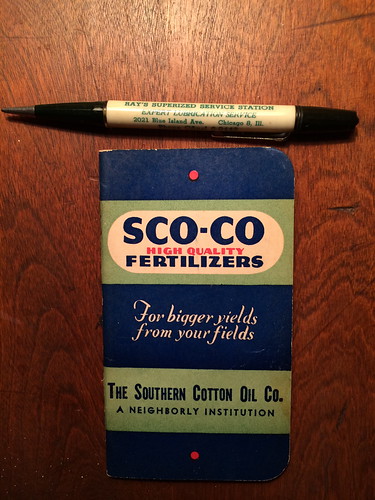 One day, while listing some items to sell, something on my desk caught my eye. It was this really cool 1940 'SCO-CO FERTILIZERS' pocket field notes book that I'd picked up for free at an estate-sale months ago, simply because I loved the look. Nothing more than a crude, blue-lined paper, pocket notebook intended as an advertising vehicle. Then it hit me like a bolt out of the blue...how incredibly useful a pocket-sized Mid-Century Modern field-guide would be! Not something packed with encyclopedic knowledge, rather, a quick-reference resource designed to provide a handful of key points on many of the most sought after pieces from this design period.

Please don't misunderstand! I don't think this is a great idea because I came up with it. I like it because I can easily see how much something like this would have helped me during my 'self-education' period. Having this in my pocket would have been a significant advantage for me. Not by answering each and every question that arises while picking, but by greatly increasing the efficiency of my online searches...both on-the-spot via smartphone, and at home beginning a more in-depth inquiry. 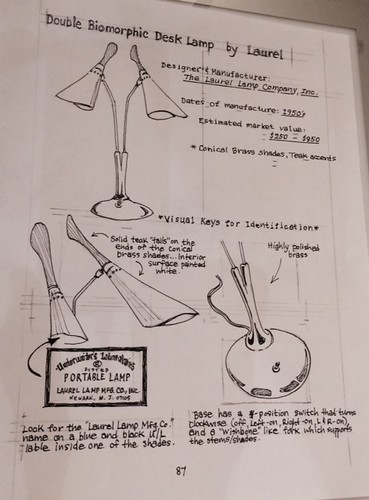 Coming up with the layout, content, and cover design myself was a no-brainer. These are all things that I love to do. Design, draw, write, and share knowledge. It has been a total blast to put together. I've put a lot of my heart and soul into the *modwagen* Mid-Century Modern Field-Guide, and I hope it goes on to help many folks become smarter pickers, and make fewer mistakes.

Regarding mistakes...the bottom half of each item-description page is devoted smaller, close-up photos with verbal explanations of 3 - 5 critical marks or features to look for, enabling the user to better differentiate the authentic pieces from the reproductions (see image of sample-page).

I'd like to thank literally everyone that I've come to know through my experience in the MCM enthusiast market thus far. Fellow pickers, shop-owners, estate-sale company owners, bloggers, clients/customers, and many vendors and resellers who've bought from me over the last few years. I have learned at least one important thing from each and every purchase or sale that I've been involved in. Additionally, I have met some great people as a direct result of my involvement in their community.


I really need to share at least one example. While trying to figure out what to do for my Kickstarter video, a vintage shop owner I've recently come to know actually offered me and a buddy the run of his entire store, along with access to not only his anything we wanted to use from his store's inventory, but also pieces from his personal collection at his home! His generosity, support, kindness, and trust simply blew me away. You will see this gentleman, and his son who manages the shop, if you watch my Kickstarter video. Great, great people. Hope they know how much I appreciate them!

One last quickie -- I am working to develop an online version of the MCM Field-Guide for those occasions when you're caught without it. Future plans also include 'Expansion' books that go deeper into specific categories. I'll keep you posted. 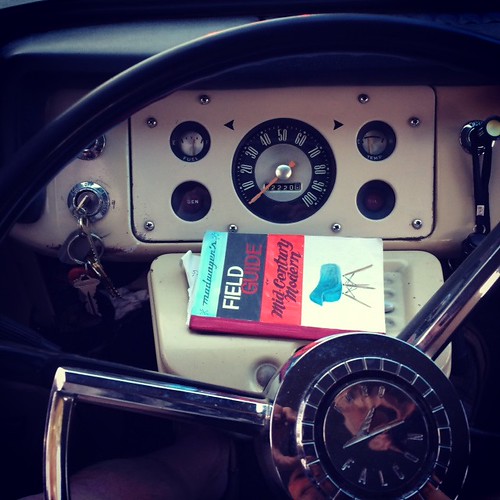 Thanks so much for checking out me and my Field-Guide.


So there ya go...what do ya think?!  I would have loved to have had a small, concise book like this

when I was first starting out.  I think it'll be a big hit.  I might even try to get the Girlfriend to pledge

a few bucks on our behalf.  How 'bout you?  Need a little bump for your Karma?
Posted by Mr. Modtomic at 2:35 PM

Email ThisBlogThis!Share to TwitterShare to FacebookShare to Pinterest
Labels: How To, Inspiration, Mid-Century Modern