Out with the old, in with the new…or…Restoration of an Adrian Pearsall sofa part two 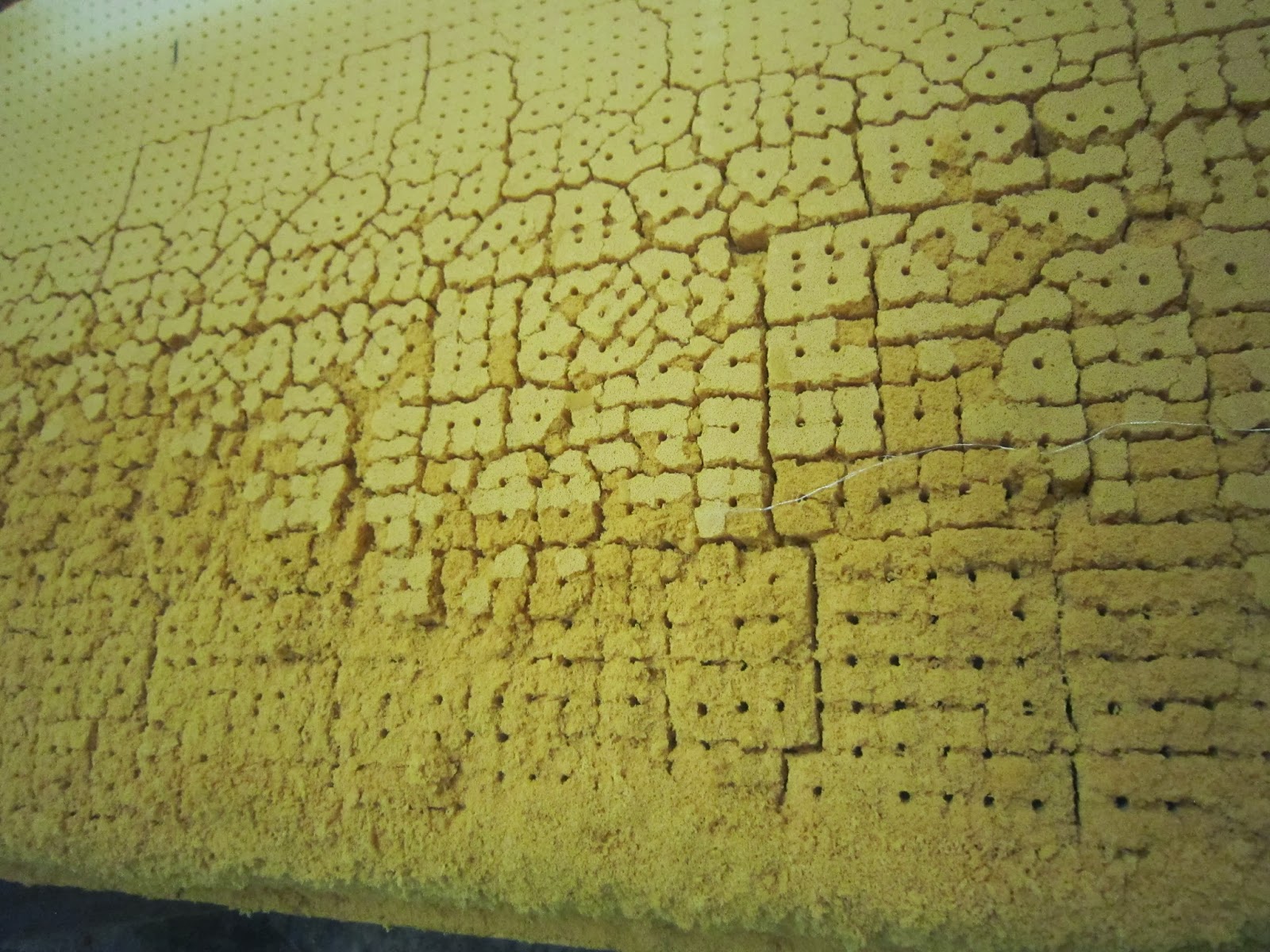 Ready to continue getting this Pearsall sofa back on its feet and lookin' lovely again? The hard part is almost finished, and the messy part is about to begin.

I have lived my life very happily so far without EVER having given a "shout out", and I would like

to keep that streak going. However, I would like to thank Mr. M for letting me highjack his blog to

offer a bit of MCM related "how-to". Not shouting out, just giving a appreciative nod. We left off last

time having removed the staples attaching the dust cover, seat, and back from the bottom of the

frame, and this is what we're looking at now. 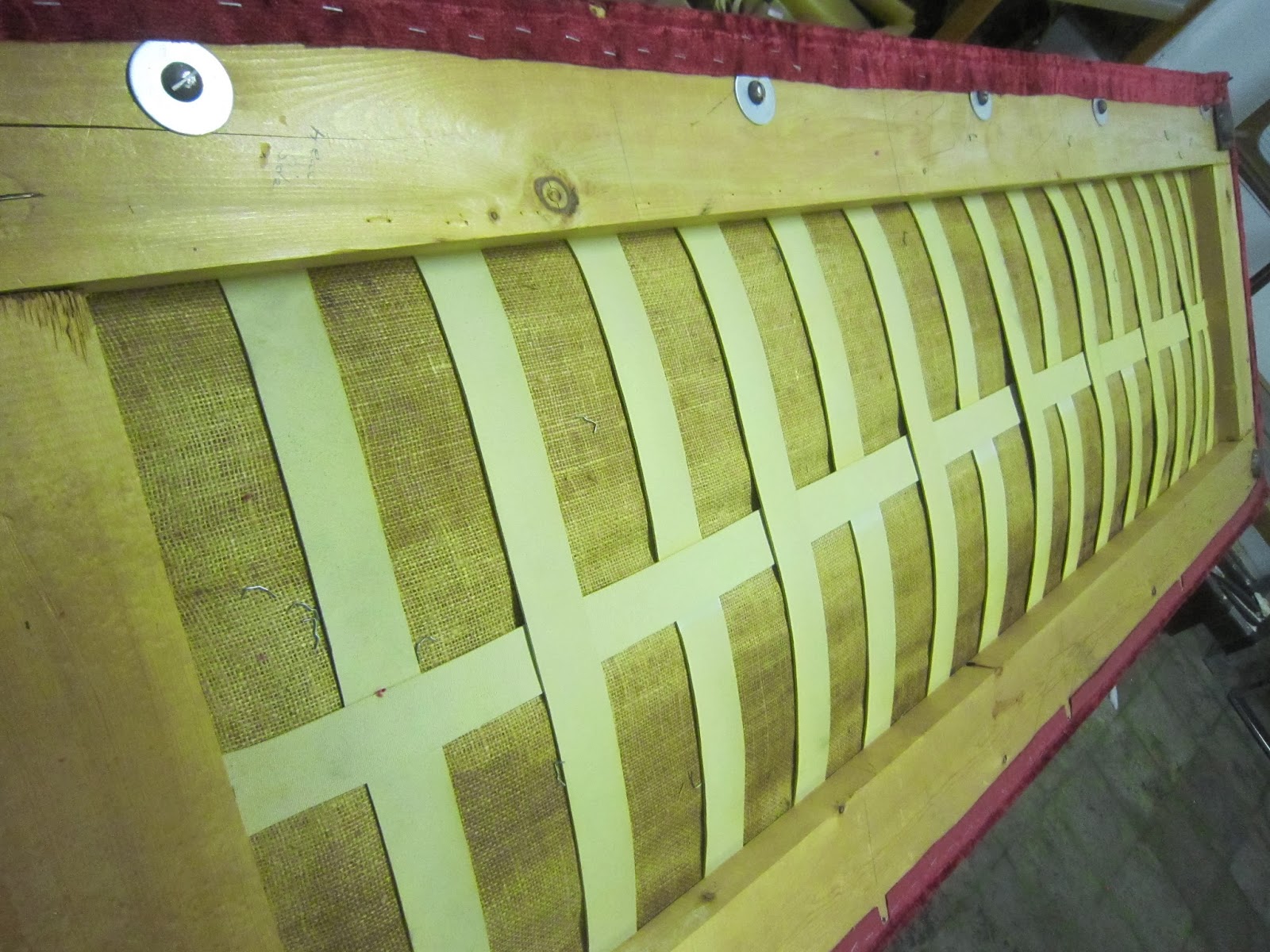 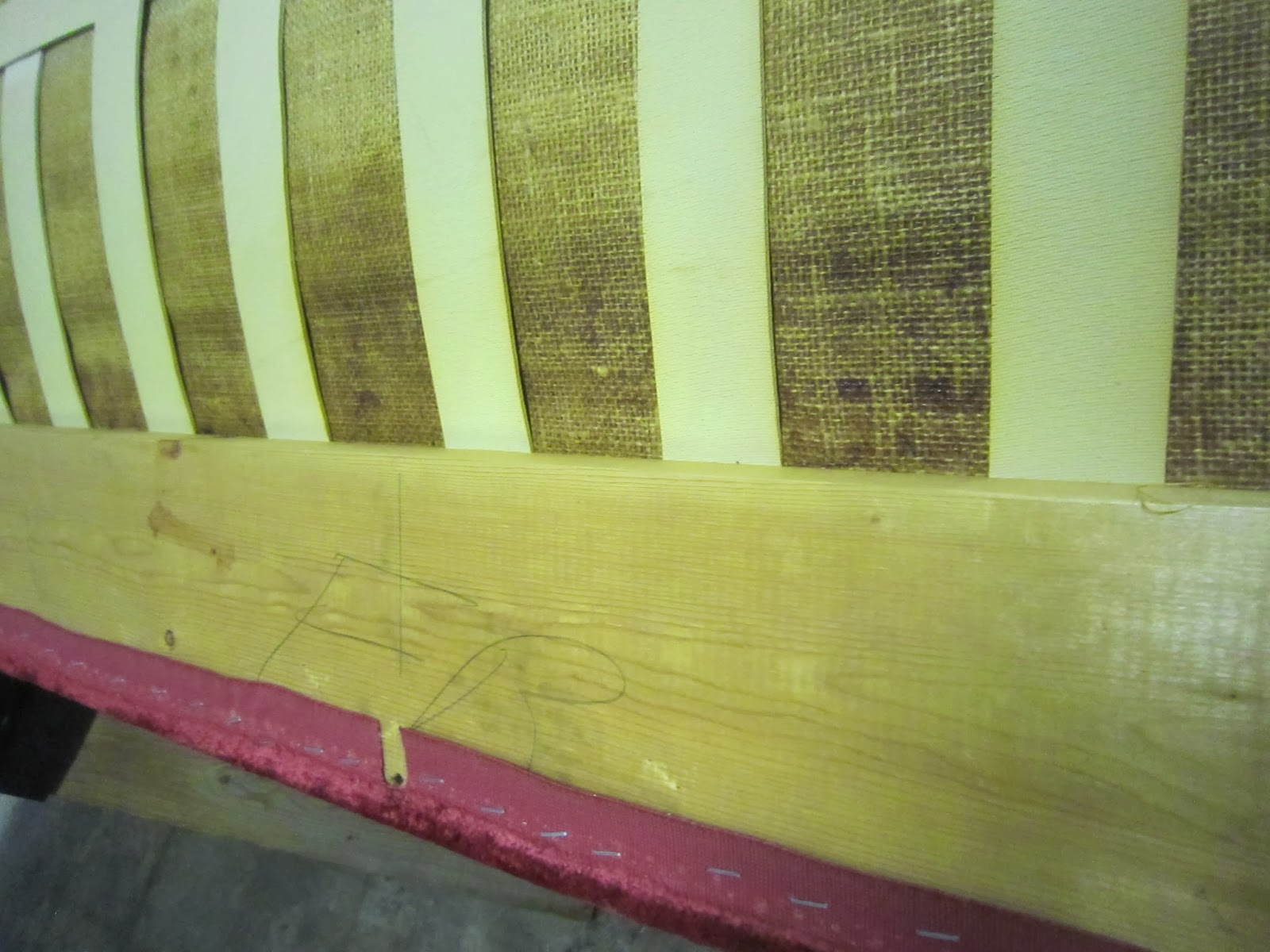 The condition of the straps supporting the seat is hard to in the image, but they are starting to dry rot

and we will need to replace them. You CAN see here that the burlap over the straps is kinda nasty

looking, most likely as the result of some kind of fluid being spilled on the seat and soaking through.

The seat and back of the sofa are actually two separate pieces that are upholstered, and then bolted

together, so we need separate them in order to get all of the old fabric off. 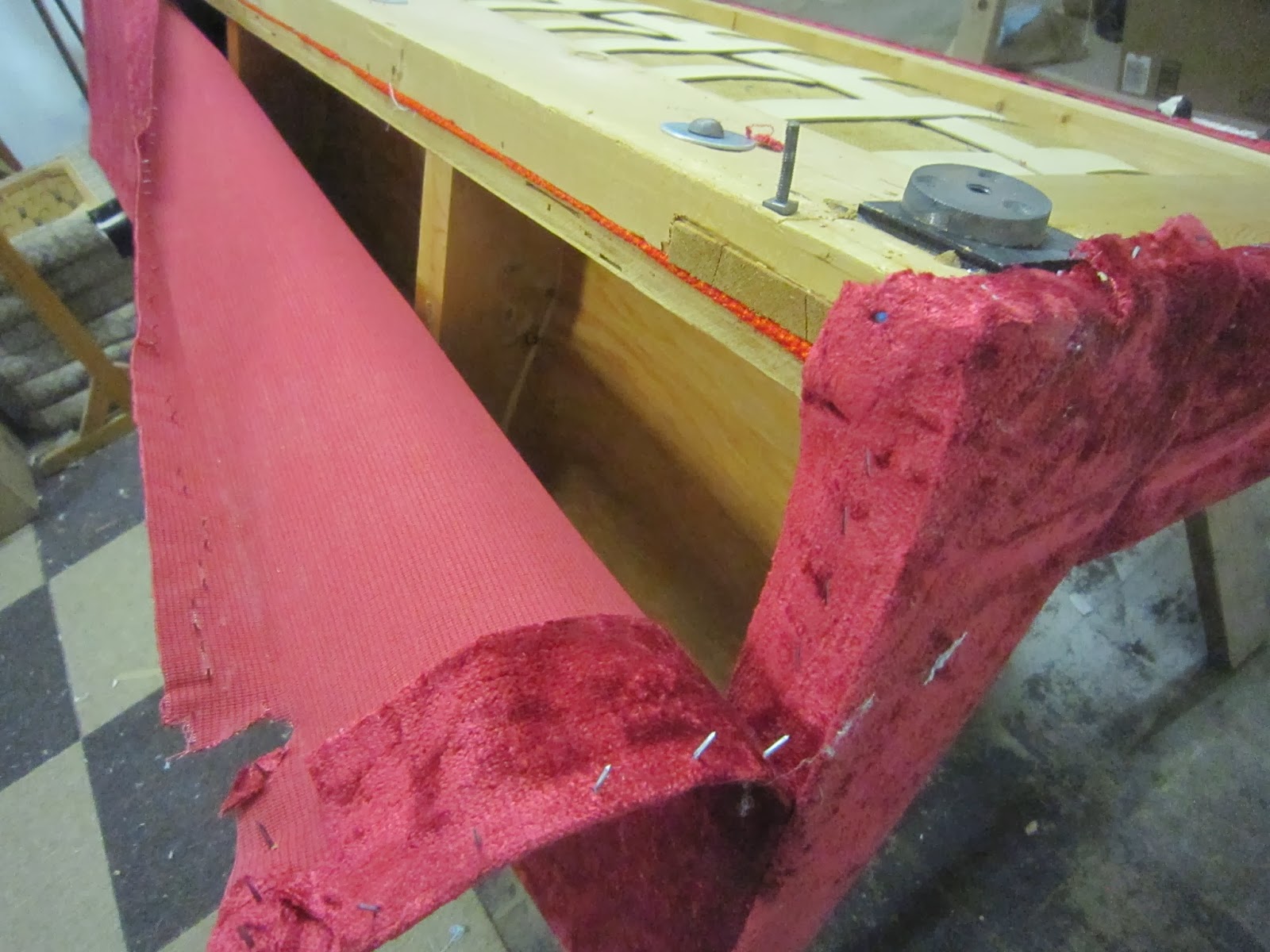 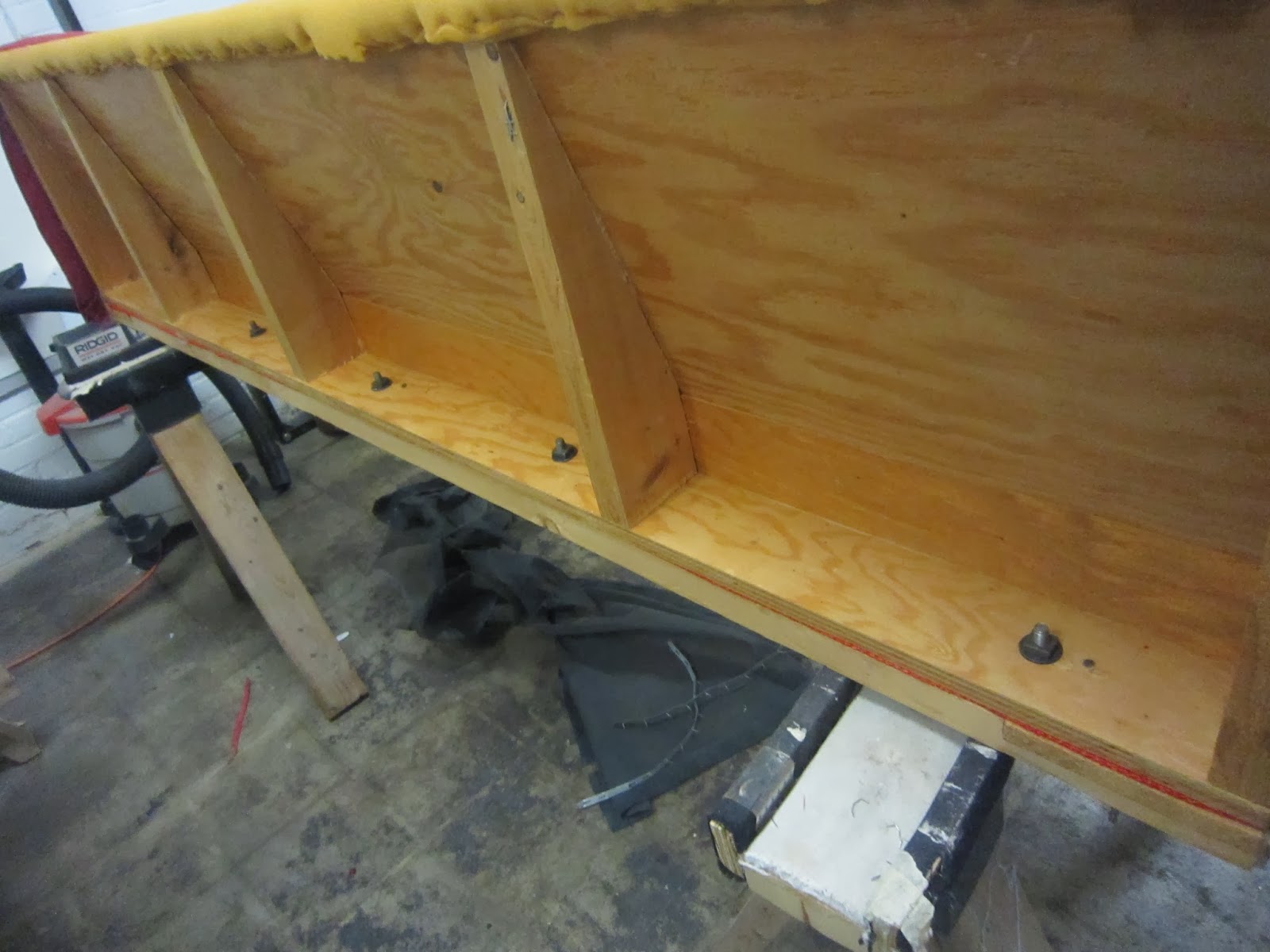 The outside back is stapled to the bottom of the sofa as we've seen, and the sides of the back can be

hand sewn on, or attached using either plygrip, (we'll get into that on a different project) or a slimline

tack strip. The tack strip was used in this case, and pulling it off reveals the series of bolts securing the

back to the seat. After we remove the nuts and washers from the bolts, we can separate the two pieces

and remove the rest of the staples which had been concealed. (Yay! More staple pulling!) 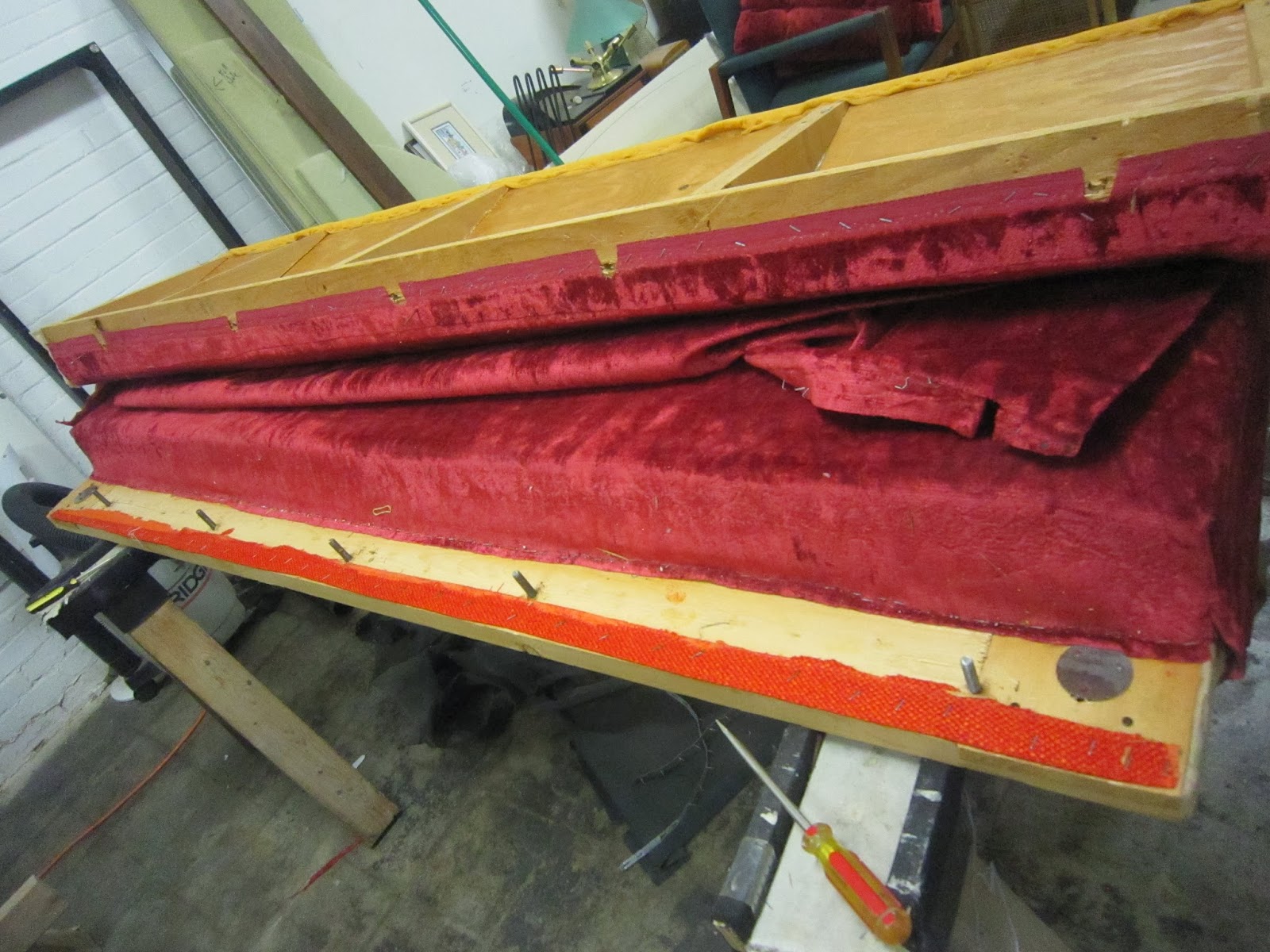 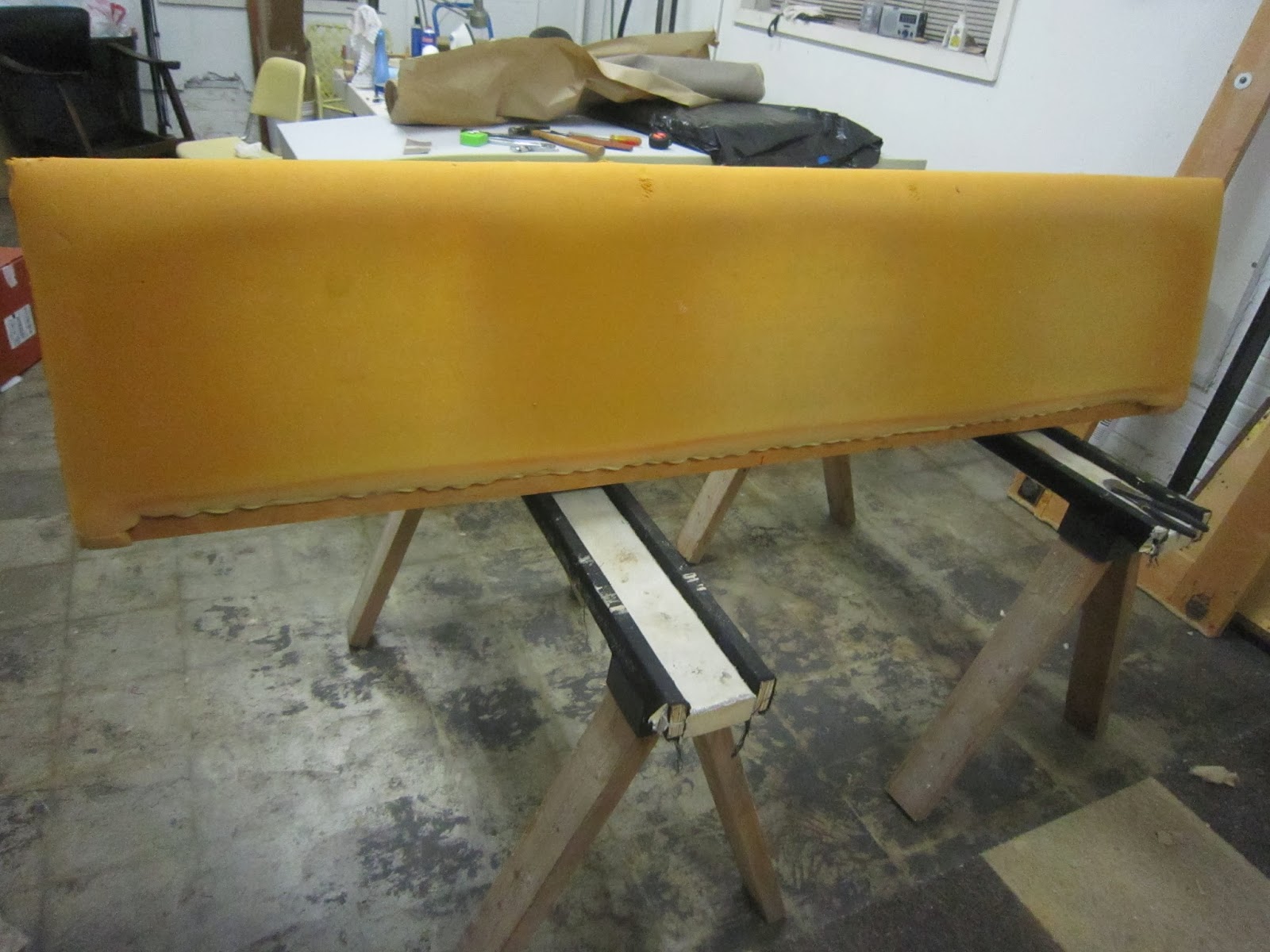 Now that we've got all of the staples out that were holding the fabric on, let's check on the condition

of the back foam. A one inch polyurethane foam was used on the back and despite some

discoloration, it is in good condition. We'll leave it in place, then freshen and reinforce it before

recovering it. The seat foam however… 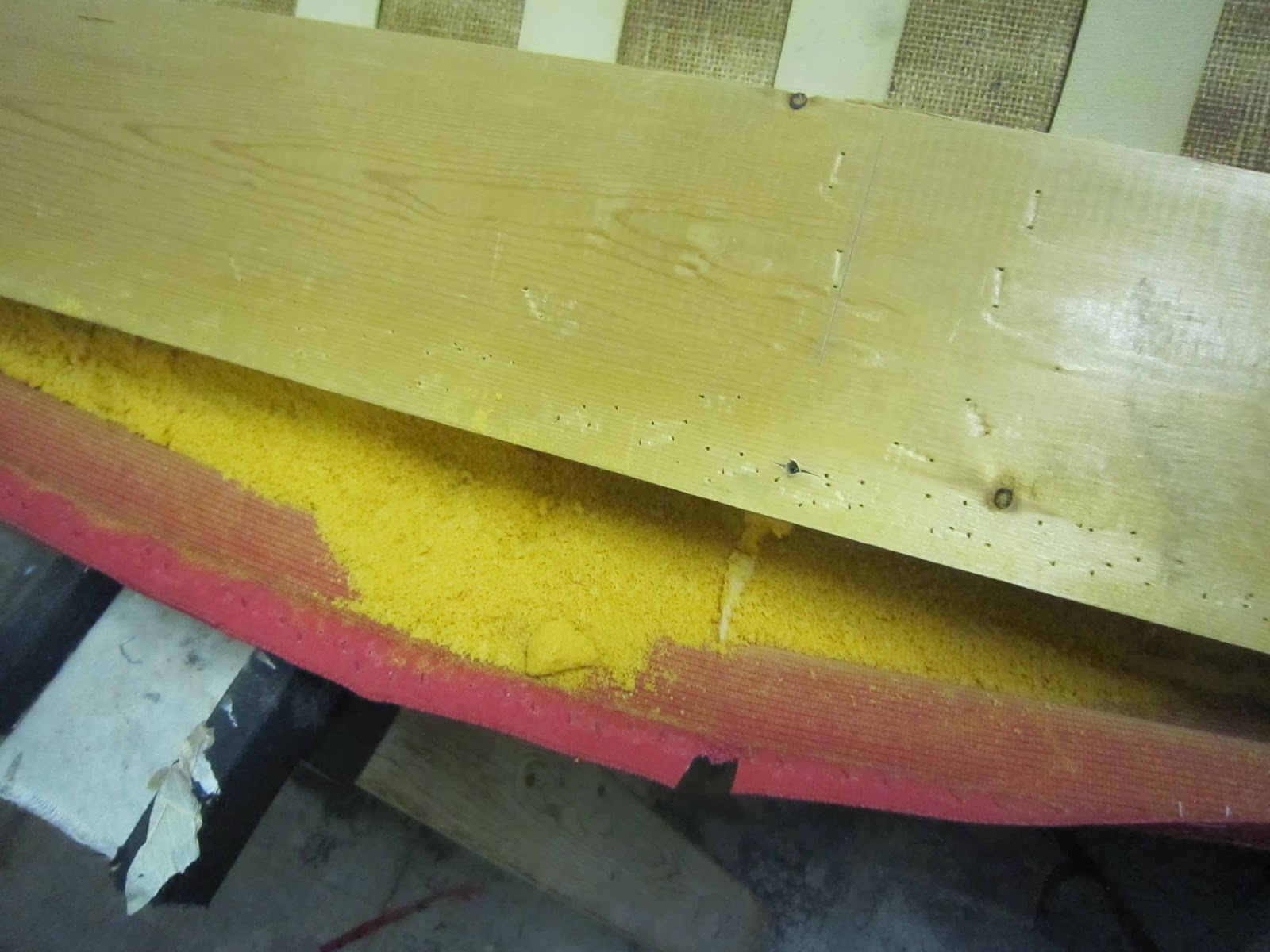 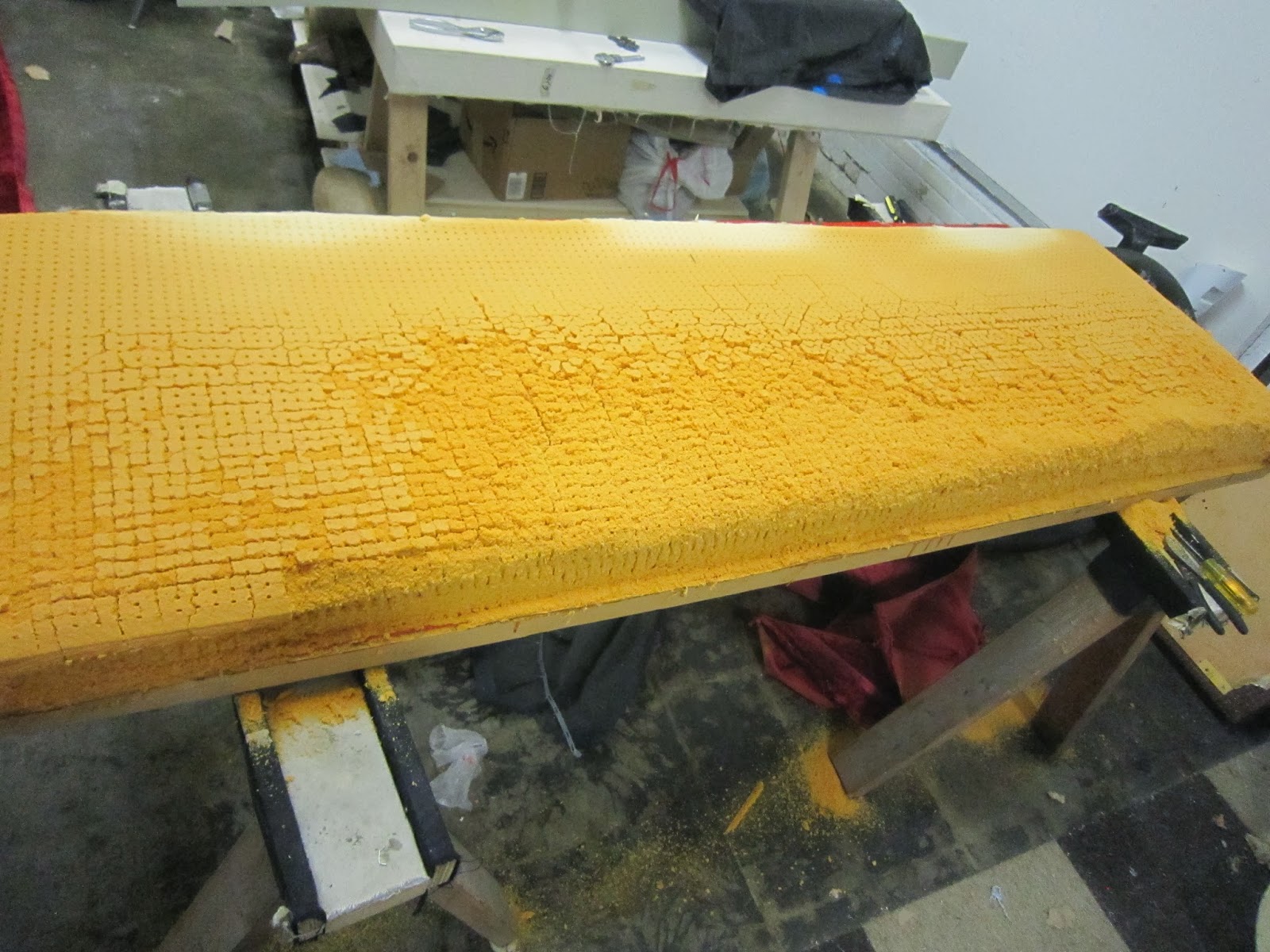 When we start to pull the fabric off of the front, the aforementioned (probably) carcinogenic yellow

dust that used to be latex foam comes pouring out. 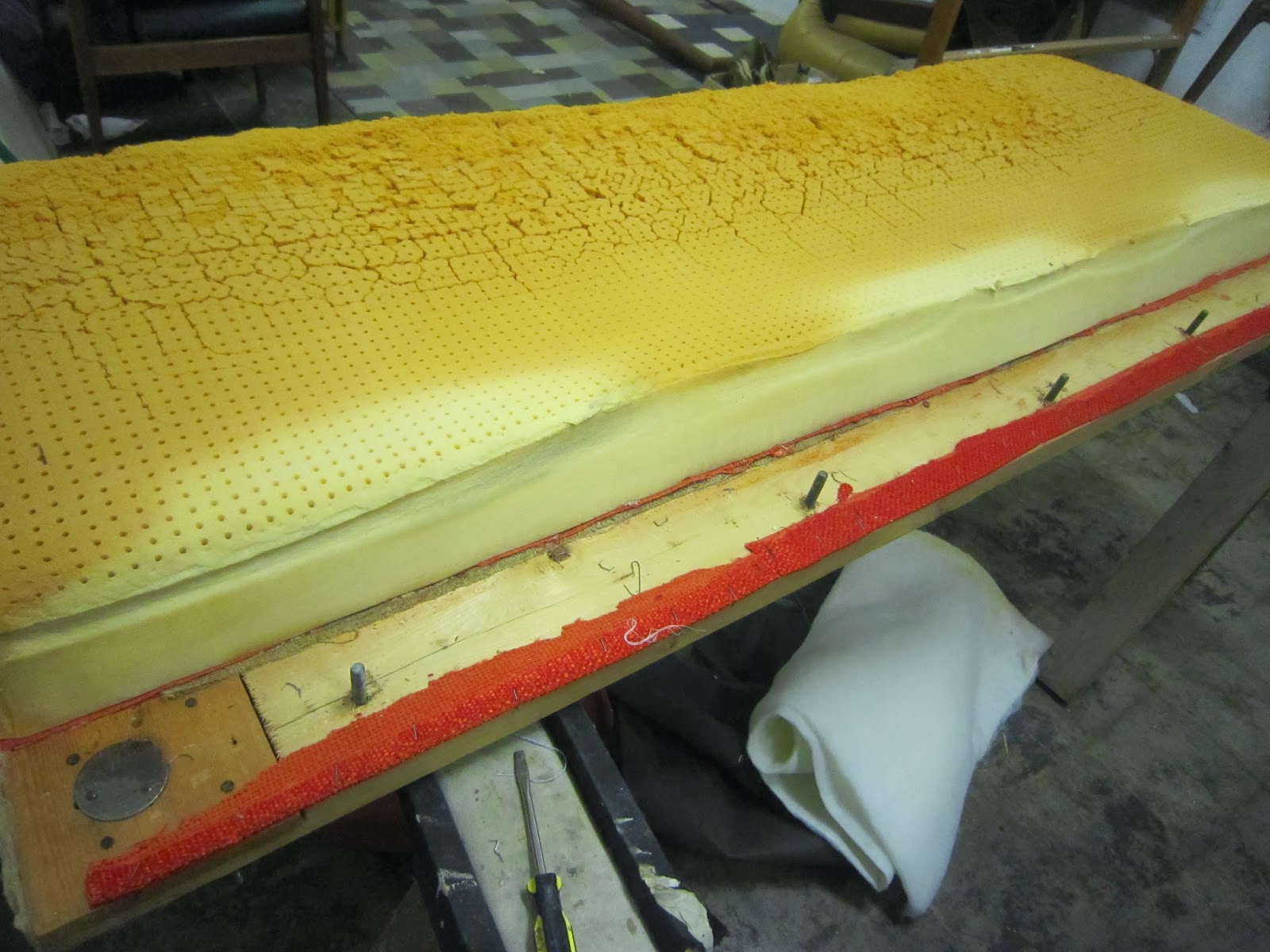 Notice that the foam at the back of the seat is in better condition, with the lighter colored spots

showing less deterioration. It's no coincidence that the three lightest colored spots are where the back

cushions sat on the seat for decades! Alright, lets get this nasty old stuff off and work our magic. First 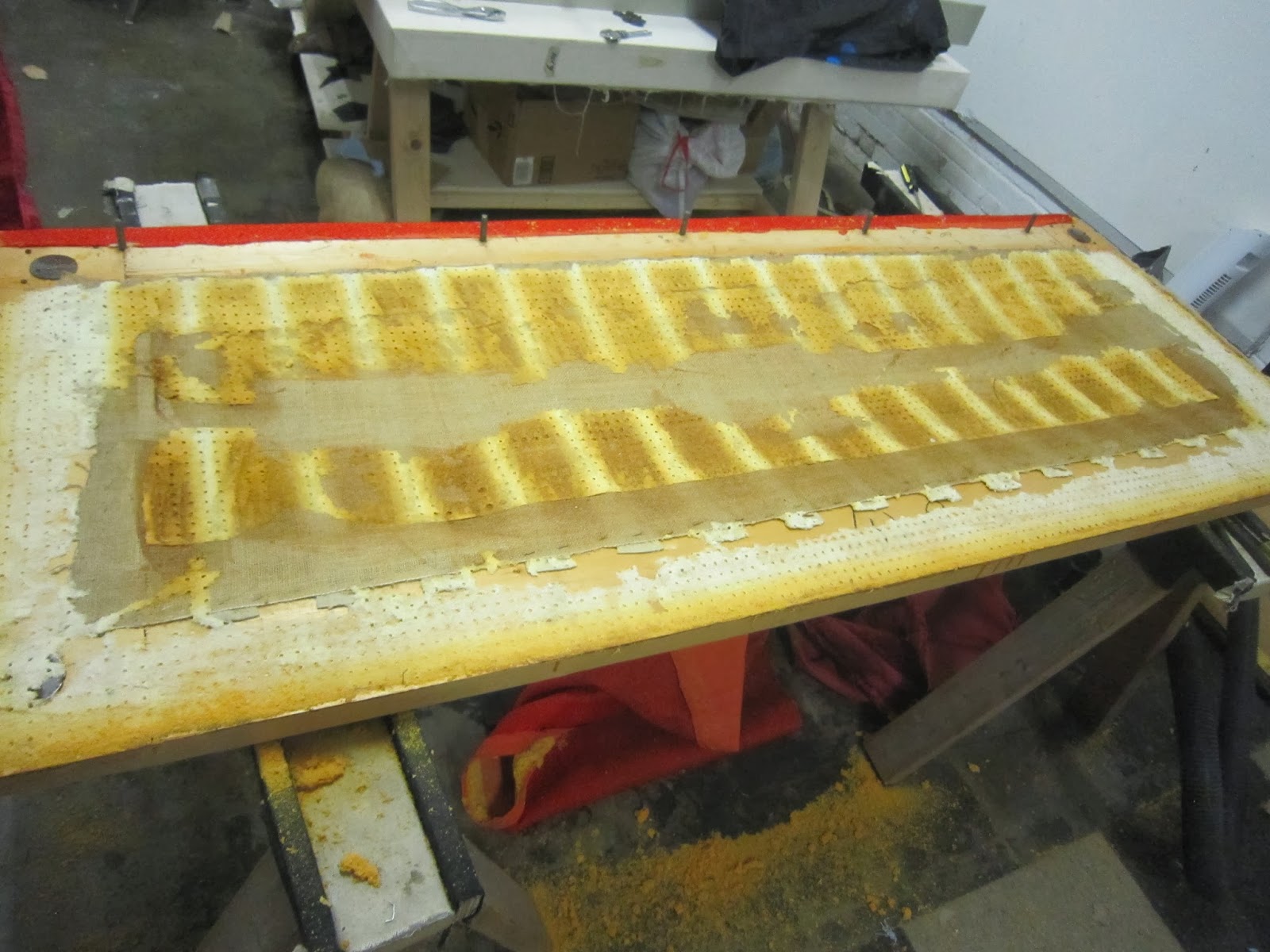 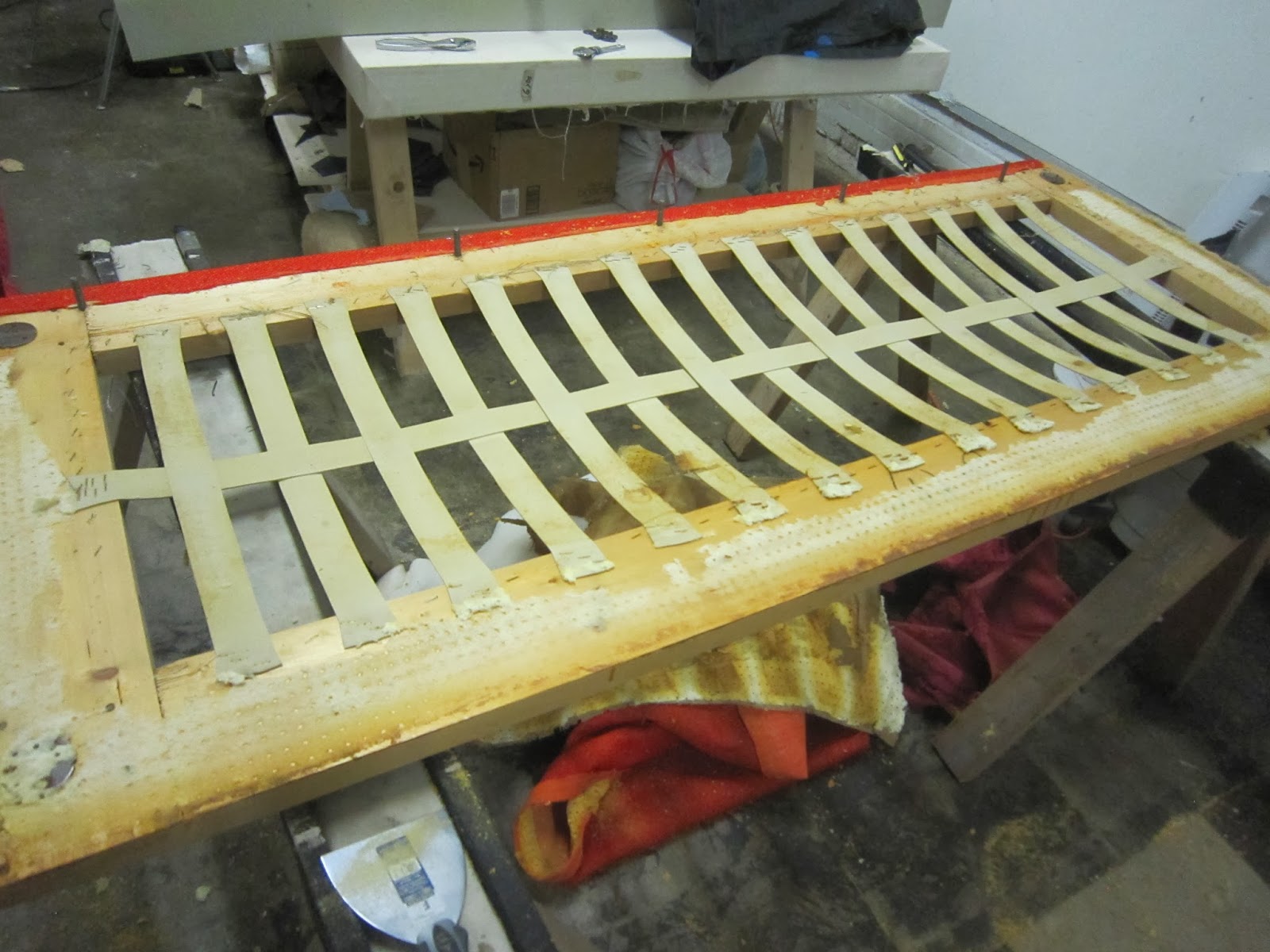 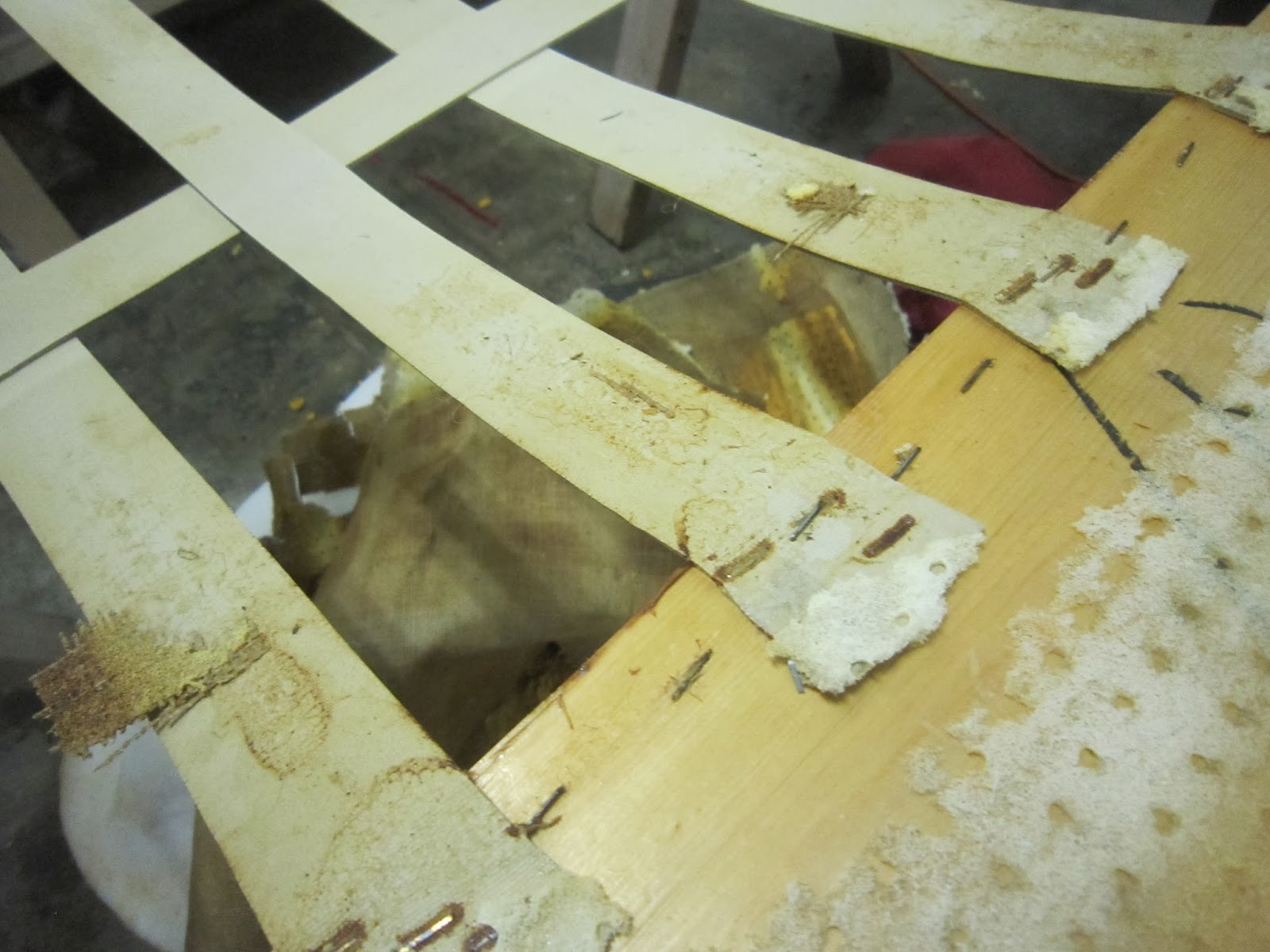 Then the burlap "skin" comes off to reveal the webbing. We'll also be scraping the still-glued foam

off the wood. We could tell from the bottom view of the straps that we were most likely going to be

replacing them, and this view of the top confirms that yes, they're nasty and have to go. 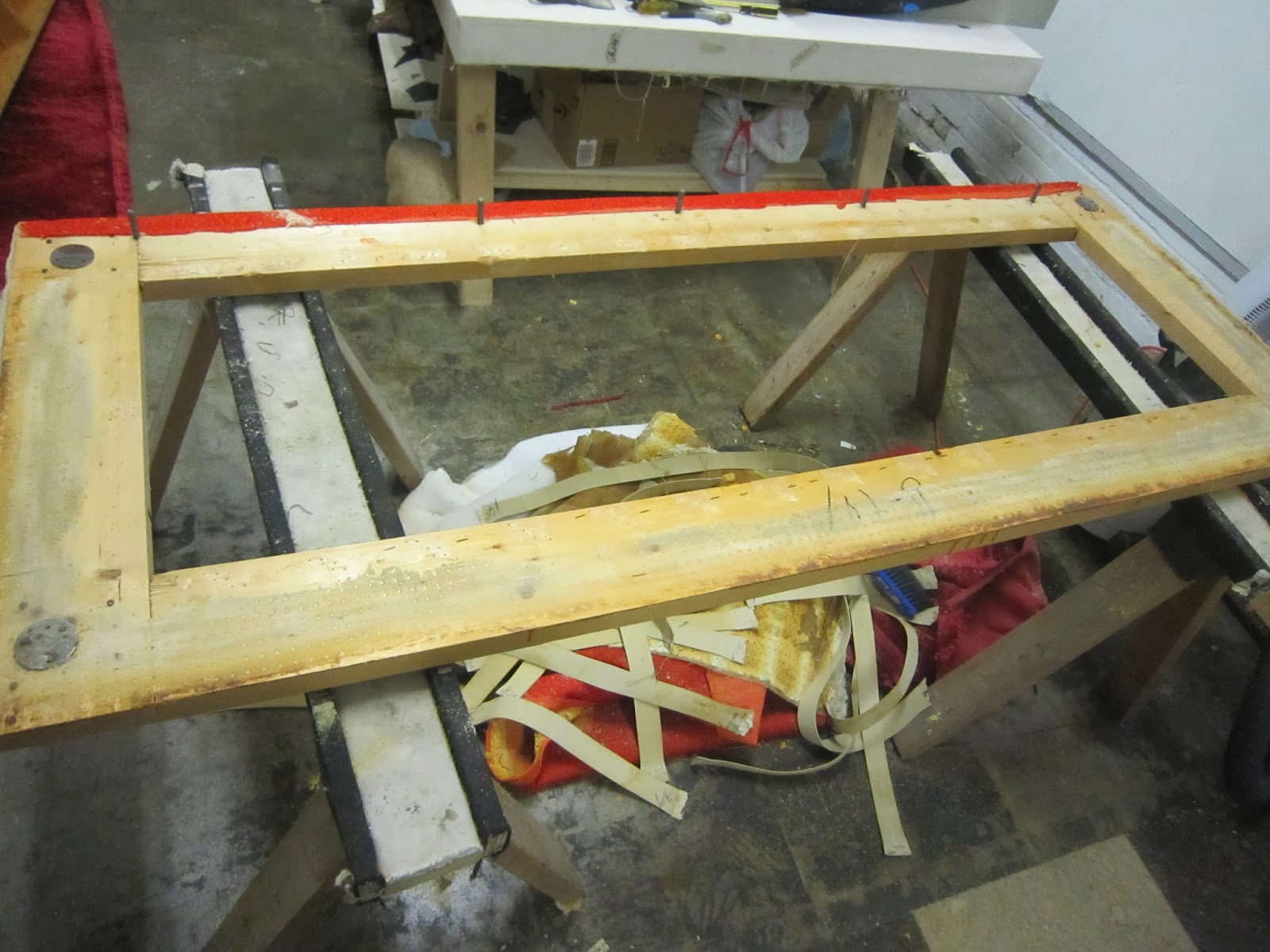 Now that we've got the seat down to the bare frame, we just work our way backwards with new 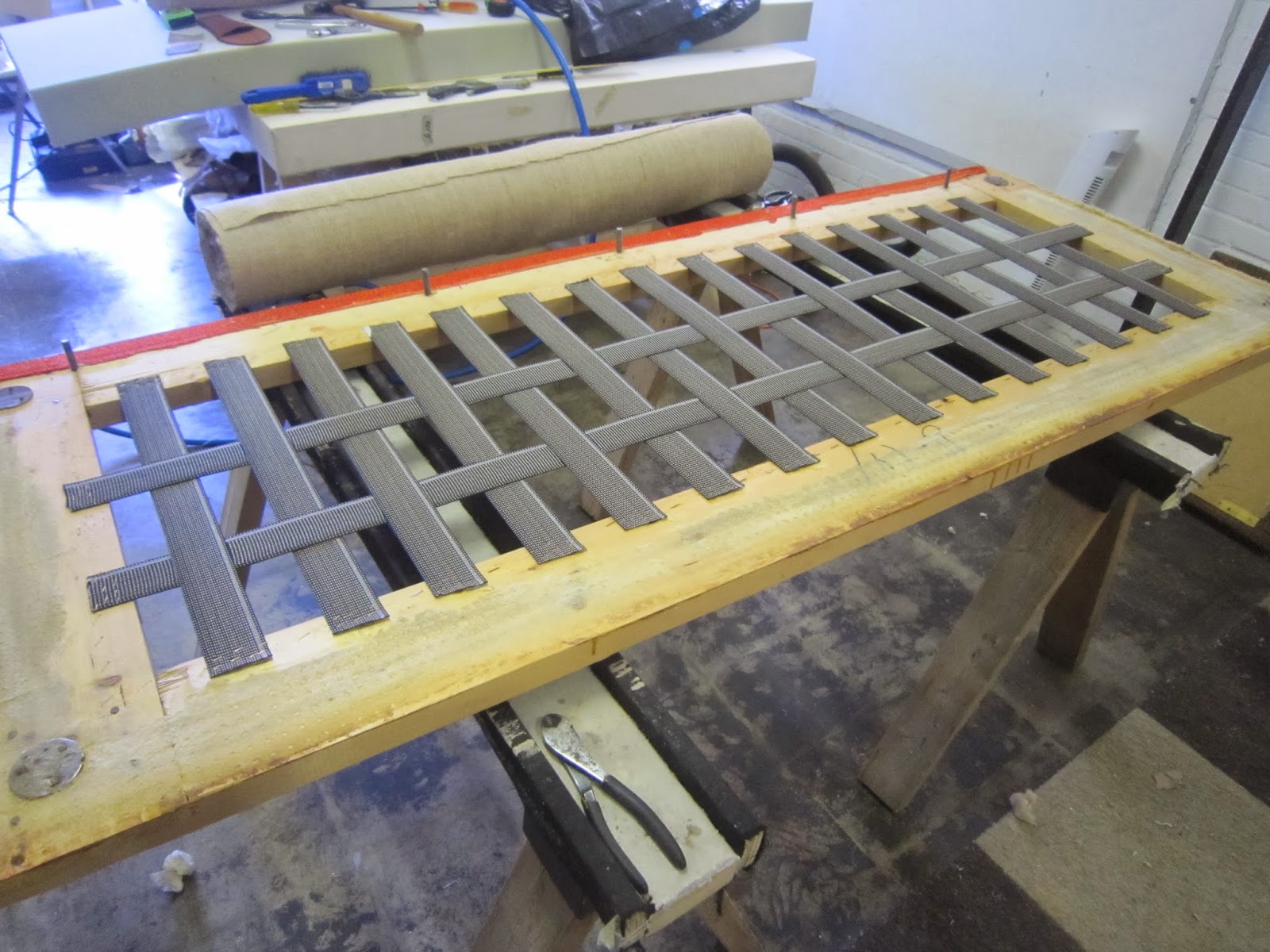 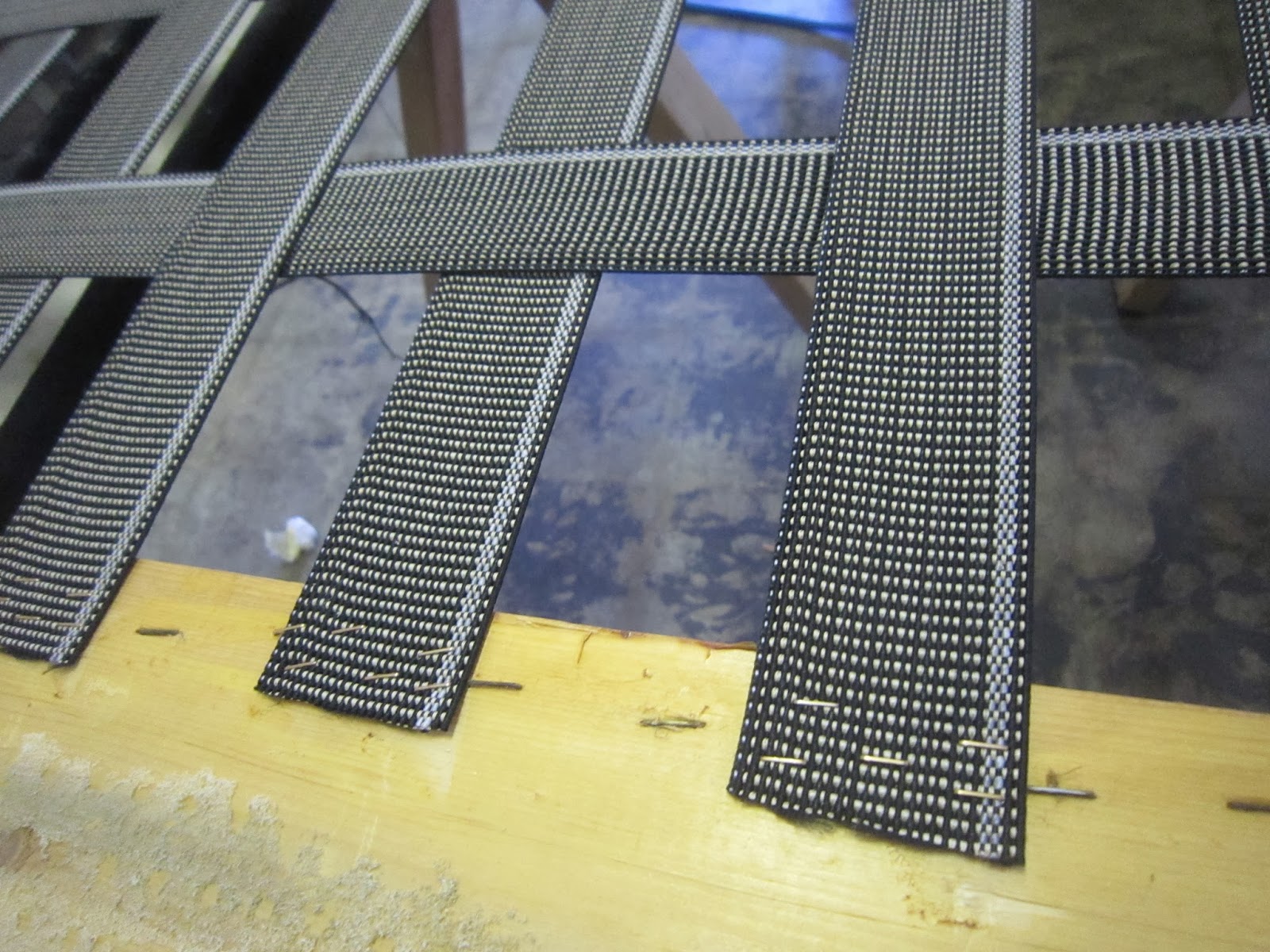 …new burlap over the straps… 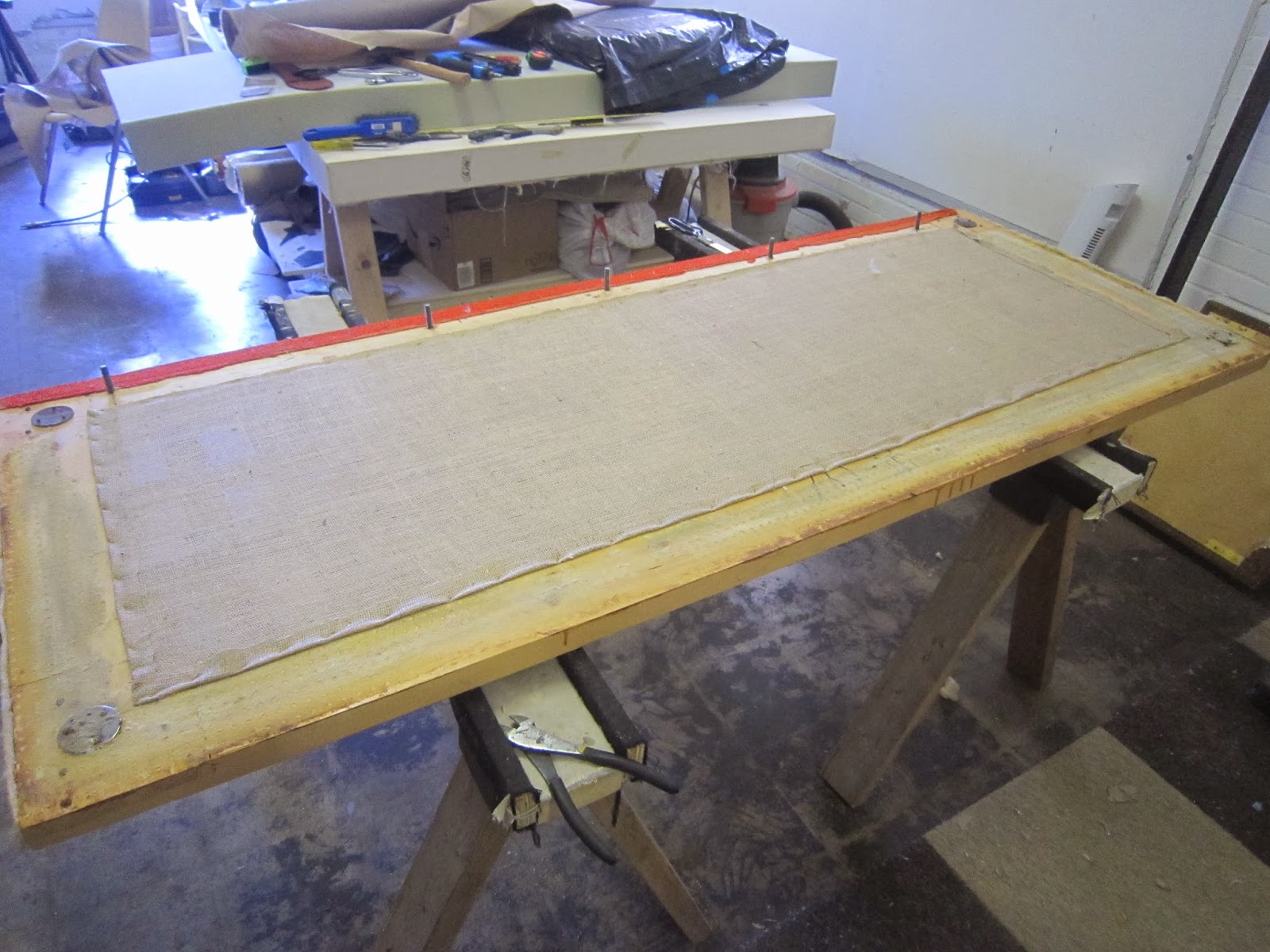 …then we spray glue the new seat foam to the platform. Most upholstered seats, including cushions,

use 4" foam of varying densities (usually medium to medium-firm), and that is what we're putting on 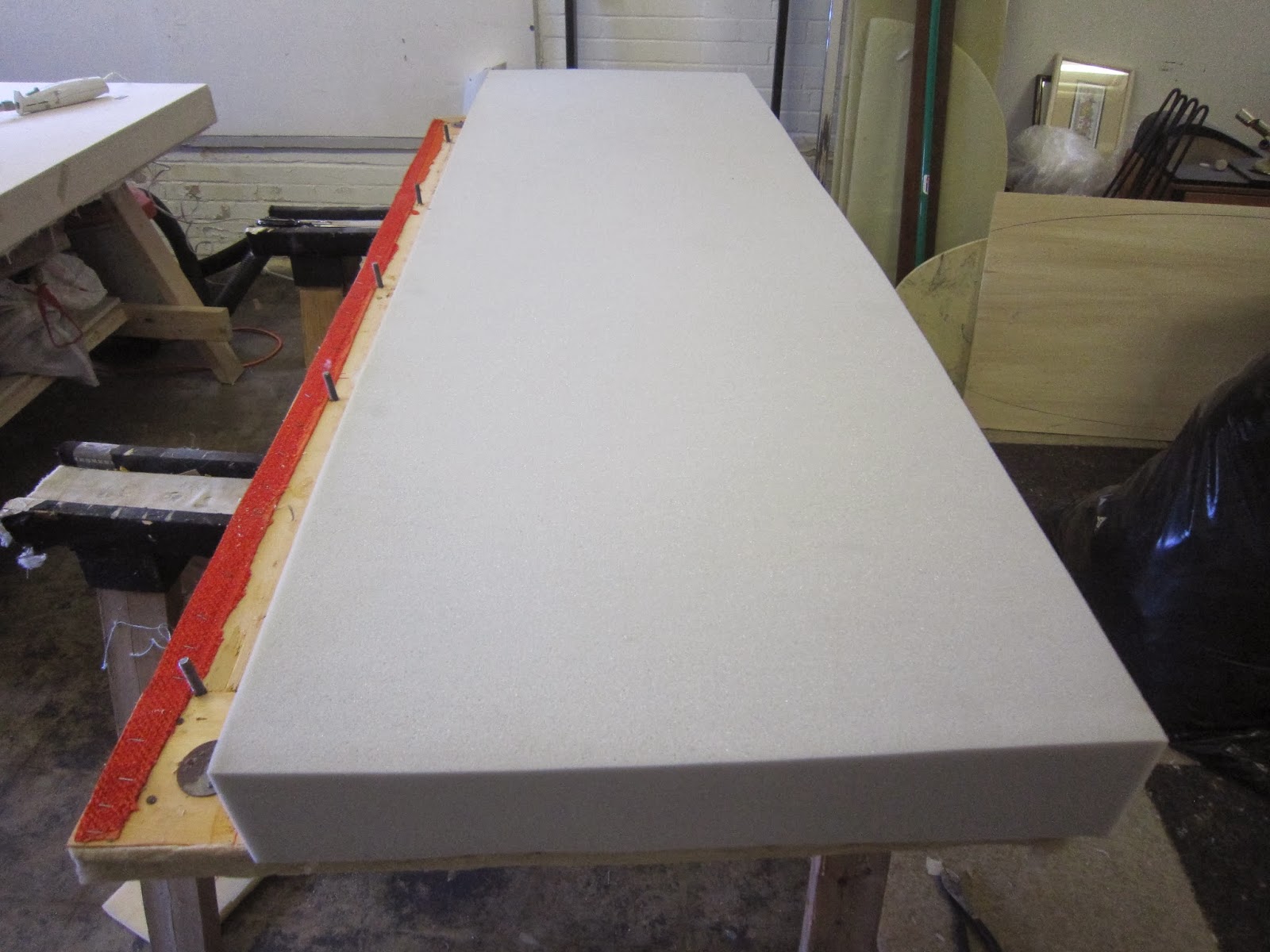 The sheets of foam that I get from my supplier measure 82" x 24", which is working out perfectly on

this project, as 24" is exactly the depth that's needed, and the platform is 75" long so we only need to

cut 7" off the end of the foam. The last step in re-padding the seat is adding a layer of dacron over the

foam, and stapling it to the frame. 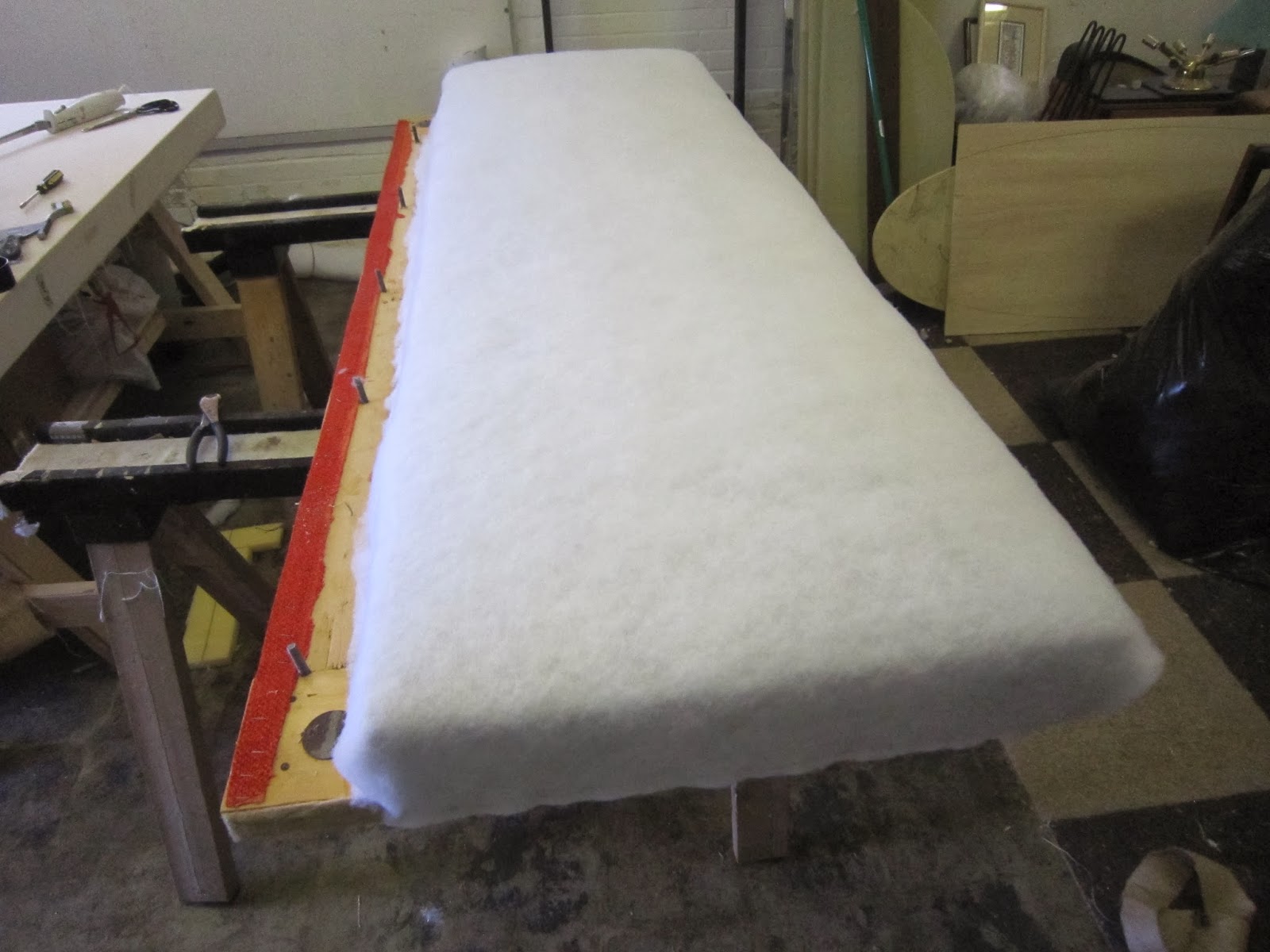 The dacron provides a bit more padding, but more importantly it adds a nice smooth surface, and provides

a buffer that eases the wear of foam on the fabric and vice versa. We've got our seat platform ready

for new fabric now, but we'll tackle that next time, the good lord willin' and the creek don't rise!
Posted by Unknown at 1:11 AM

Email ThisBlogThis!Share to TwitterShare to FacebookShare to Pinterest
Labels: Adrian Pearsall, Before and After, How To, Sofa, Swift, Vintage