So Not Last Weekend, But The Weekend Before, I Was On A Whirlwind Of Estate Sales, Picking Ups And Dropping Offs And Then The Relative Calm Of The Auction. At One Of The Two Estate Sales I Grabbed Up This Lot Of Dorothy Thorpe Entertainment Pieces. Status: To Be Available. 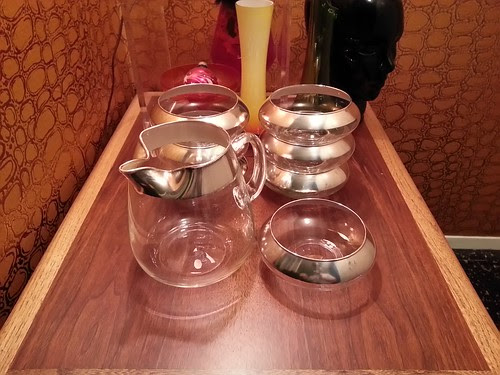 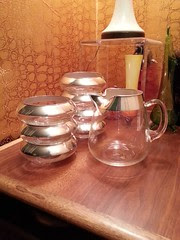 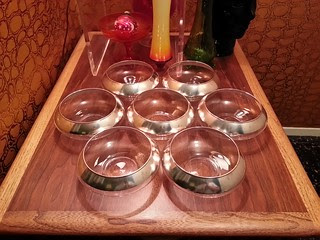 So at that first sale the ad said that they'd have line numbers out by 7am so I showed up about 6.  The

sale was just around the corner from home so it wasn't a long drive.  It was still dark out when I

arrived.  I was the second car there and just after the sun started peeking out the driver of the first car

got out and walked up to the door of the house.  Then the others followed suit and I found myself not

2nd...but 9th!!!  Turns out the numbers had been put out the evening before and 1 thru 7 had already

been snatched.  Didn't matter, I got what I wanted from the sale.  But that's getting ahead of myself.

After getting my line ticket I tooled over to the second sale to get a line number for that sale.  I

managed to get number 4 there.  Then I had to rush back to the first sale.  They didn't really stick to

the numbers and everybody just kinda made there way in.  I grabbed the price ticket off the cool

console, loaded it up and headed off to the second sale.  I was really only after a Chesterfield love

seat there and easily got to it and got the tag right away.  Again I looked around the rest of the house

for any additional bits to buy and one of them was this Dorothy Thorpe snack bowl and pitcher set. 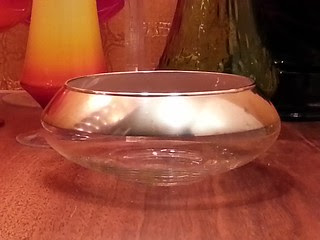 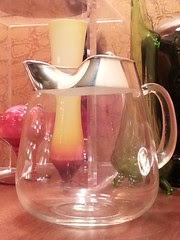 These aren't the usual "Dorothy Thorpe Style" pieces with chrome rims, but are decorated with

genuine silver.  I've gone through a number of Dorothy Thorpe chip and dip sets and have even had

one that retained its Dorothy Thorpe sticker and they were all decorated in this same style, so I'm

pretty positive that these too are genuine DT pieces.  Anyway, like I said...I bought the loveseat size

then race back to get the Chesterfield.  That stayed in the back of Frank until after the auction when I

dropped IT (which has already found a new home, just like the console stereo!) off at The Green

Shag Market, at which point I was able to finally put my auction winnings into the back of the car.