More Gratuitous Photo Sharing From Our Summer Roadtrip. Neon Signs And Big Ol' Waterfalls. Must Be In Niagara Falls NY! Status: Not What I Pictured. 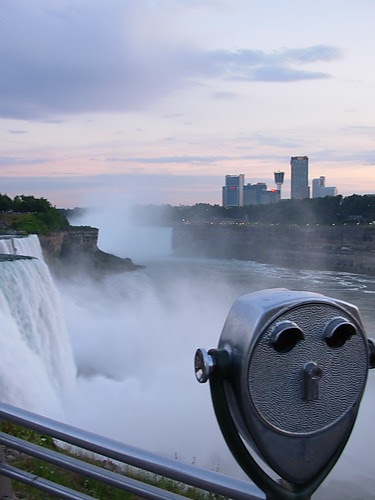 So the "Falls" are the Falls...are the Falls.  Quite Impressive, especially since we arrived just at sunset!  We spent about an hour at the Niagara Falls park as soon as we arrived...and then went back to the highway where we got off to find a place for the night.  We had spotted a great neon sign from the offramp and wanted to check it out. 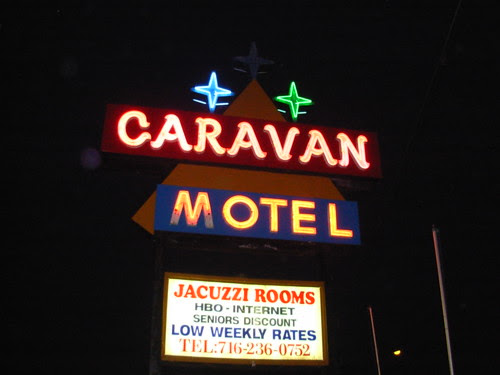 Motel will spend the money to keep a vintage neon sign operable, maybe they will keep the rooms

up as well.  Score.  Our hunch hit pay dirt.  Our room at the Caravan Motel was like $50 and was

as clean as any Budget-el you're likely to find.  It was still a little quirky.  The door to the bathroom 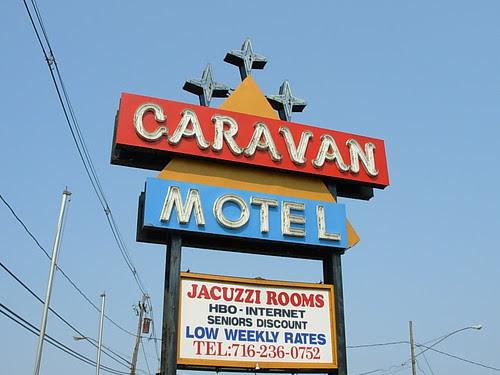 The hot water in the shower kept changing temp (we were right next to the hotels laundry room).

The toilet flush chain wasn't connected (I fixed it).  And the the universal remote wasn't programmed

(again, I fixed it).  If I'd have stayed another night I probably would have fixed the bathroom door

too!  I can't help it.  I fix stuff.  None of this stuff would ever put me off a place.  We were perfectly 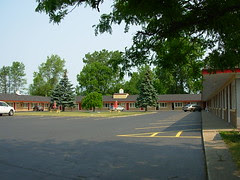 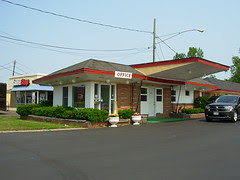 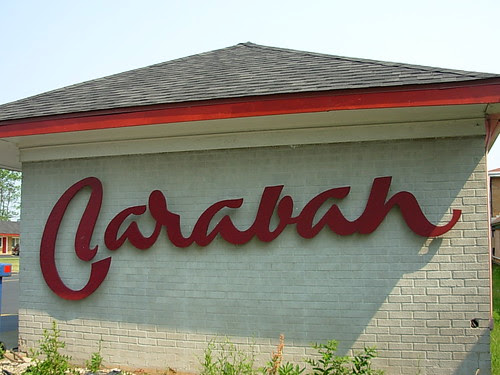 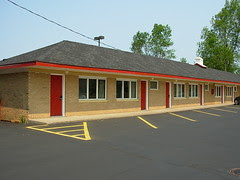 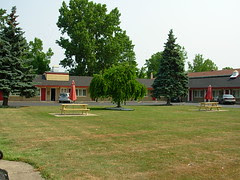 lamented the unreasonably high cost of maintaining a neon sign.  PLEASE...PLEASE, if you stay

at a motel with a great neon sign Tell The Owner How Much You Appreciate The Sign!  Let them

know that it swayed your decision to stay at their establishment.  They need to know that the sign

still Makes Them Money and isn't a black hole of destitution. 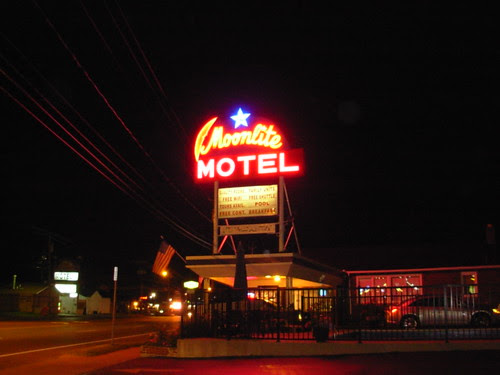 This place - The Moonlight Motel - was just down the street form The Caravan Motel.  It too

had an amazing great neon sign.  The Moon and Star blinked off and on in opposition to each

other!  Nice touch.  Again, this cannot be cheap.  We didn't stay or even have the time to really

check out the building / rooms, so you're on your own with this one.  These places all seem to be

a chance.  If you're not sure about a place, just ask the clerk if you can check out your room first.

We've never been turned down.  If you look at the pictures above of the Caravan you'll notice the

freshly sealed and lined parking lot and what looked to me like a brand new roof.  That's a lot of

money to sink into an old motel.  They are trying real hard to win your business. 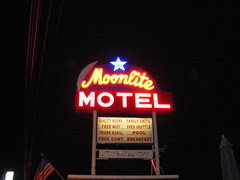 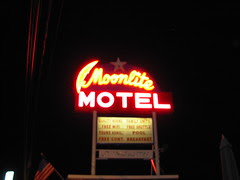 shopping and restaurants like Chili's and Olive Garden.  A little further up Niagara Falls Blvd.

is an airport.  Now...driving back toward the "Falls" from the Motels you'll go through some

sketchy neighborhoods, but this isn't the way most people head to the falls.  There is an

expressway along the lake that leads you there much more quickly.  But we like to see a little

bit of the places were we go.  We went both ways. 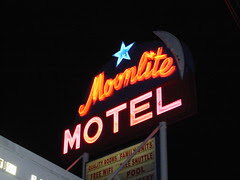 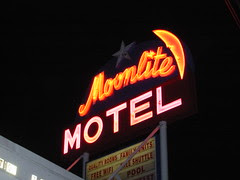 One word of advice if you go to Niagara Falls - Take Your Passport!  The party is on the

Canadian side!  It sucked looking across the river at all the good stuff that we were unable to

take advantage of.  All that there was here on the American side was a big casino.  The city

surrounding the area was dead.  It seemed like there was an effort to revitalize the downtown

area at some point but it didn't take.  Sad, that. I was really expecting more. A lot more. It's

all on the Canadian side! 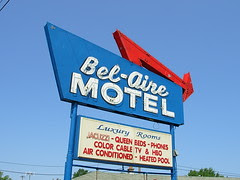 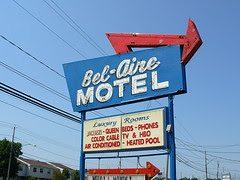 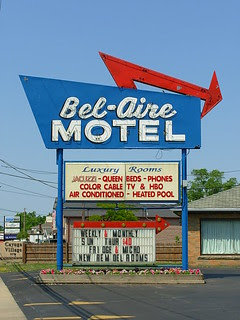 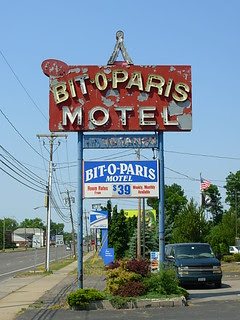 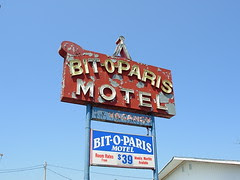 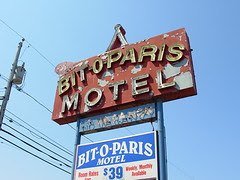 The Bit-O-Paris sign is on the chopping block. I talked to the owner. He was (as was the owner

of the Caravan) quite upset at the high cost of repairing the neon sign. He wasn't happy that I

wasn't for the prohibitive $5,000 cost of doing so! His plan is to cover it some how. Probably

with a fitted tarp type sign, if I understood him correctly. He had by this time gotten quite excited

and was speaking faster and with a heavier accent and I was having a hard time following along.

The gist was that he was giving up on the neon. I tried to explain that it was BECAUSE of the

front of his sign and speaking with him and that it might still be to his advantage to keep it alive.

Nope, not going to happen. This one is going to disappear me thinks.  I didn't have time to

check out the Bel-Aire Motel but it looked OK. 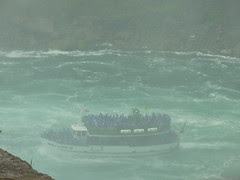 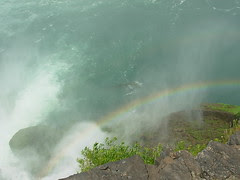 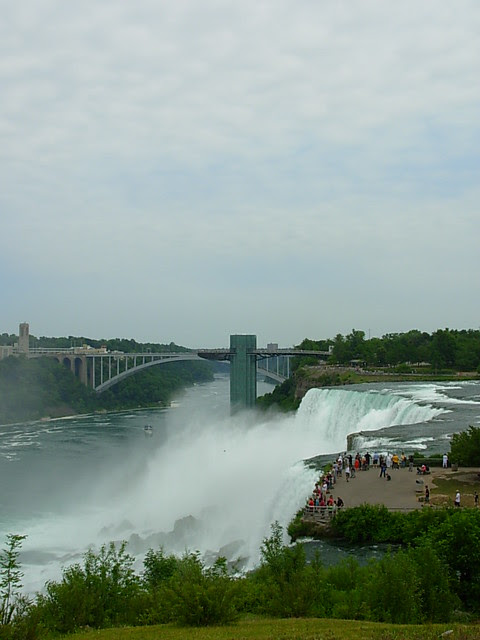 After shooting all the great neon signage I could find along Niagara Falls Blvd. we headed back

to the "Falls" and did all the ridiculous tourist stuff.  First we walked ALL over Niagara Falls

park.  Then we went to the local aquarium.  We watched the (quite frankly, cheesy) Imax movie

and then headed for the observation deck you see above.  That leads down to the Maiden of the

Mist that took us right up to the Horseshoe Falls were we got soaked!  After that we went down

as close to the falls as any sane person would want to get...and got soaked!   We ended our day

by getting a FABULOUS dinner at a local downtown Indian restaurant called Punjabi Hut!  We

sat outside in the lovely night air and even though it was late, were treated good and got great