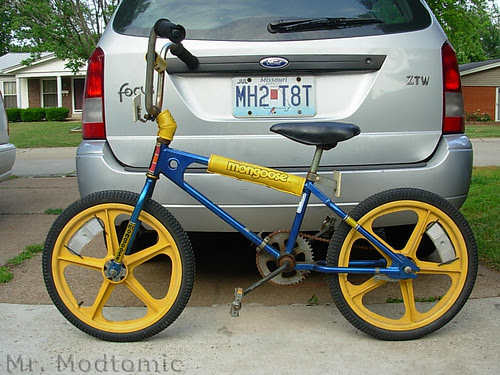 Old Levi's, old Boomboxes, and now Old BMX Bikes! I'm a BMXer, Freestyler, Skater from way back in the '80s and '90s. This bike is nearly EXACTLY like my first real BMX bike. Mine was nickel plated though (as is this fine example, under the clear blue "paint"), had red aluminum rims and I think it had "V" bars. Mine was heavily modified with all the coolest early '80s aftermarket parts.

But this unit, oh no...other than having yellow Skyway Tuff IIs installed - replacing the much

sought after Motomags - this bike is all original! Probably right down to the chain and bearing

grease! Usually when a kid got a bike like this some of the parts would get upgraded, changed

out of necessity or just traded with friends. The handle bars on this bike were called "Box Bars"

because...well they look like a box from the front. Those were so out of fashion by the time this

bike left the showroom floor! "V" bars - some made out of shiny anodized aluminum in colors to

coordinate with the bike - were the next big thing in handlebars. It's so hard to imagine that these 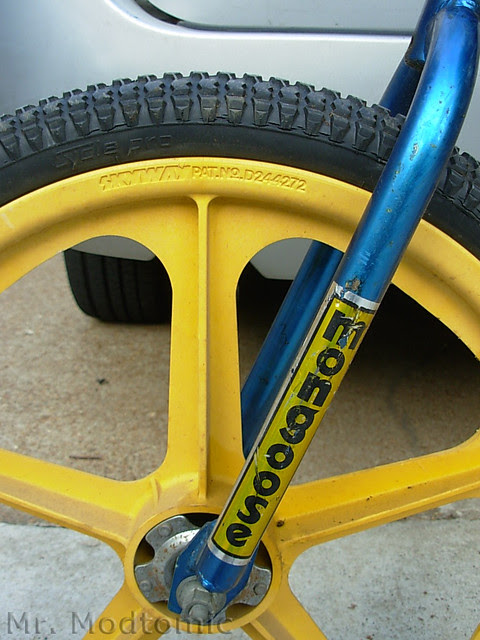 time of purchase. As I recall, all these Mongoose BMX bikes came from the factory with

bikes to ad a premium price tag with Skyway Tuff Wheels. The cool thing is how well they match

the vinyl pad set.  Hey look those pad are held on with Snaps!  This bike predates Velcro!!! 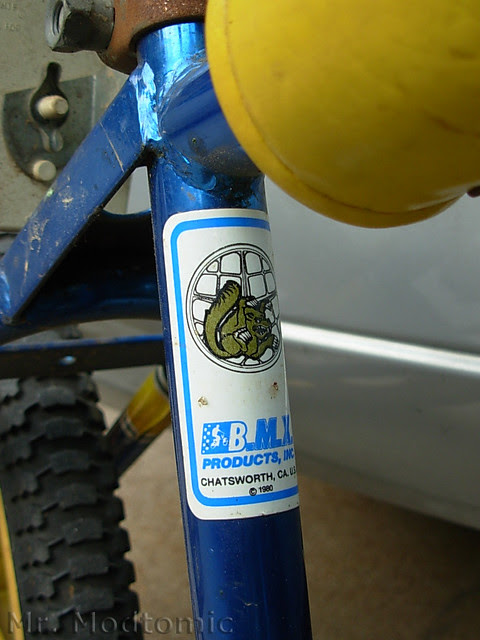 All the stickers are still on the bike too, as well as all the reflectors! The tires are likely

worn or dry rotted either. The one piece missing is the chain guard, but that's the first thing any

"serious" BMXer would take off anyway. It was just so dang amazing to find this survivor in the

rack at the Goodwill today! I saw it and immediately pulled the price tag off. I wasn't done

shopping so I went around a corner to look at the dishes (I know...I know...). I came back

was checking it out. I told him it was already snatched and he looked WAY bummed. Even one

of the young fellas (probably 10 years younger than this bike!) at the check out wanted to know

more about it and what I thought it was actually worth. I showed him some completed listings on

eBay for comparison. He was duly impressed. 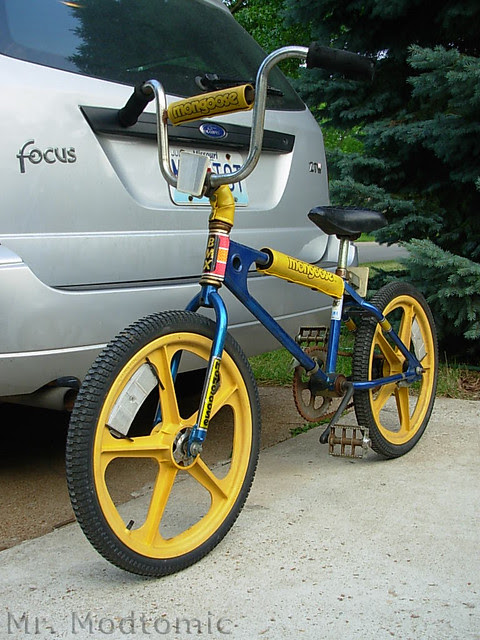 So yeah, it's utterly "farm fresh" in these pictures. We got done with our running around and back

to the house just in time to load up for the Drive In tonight, so I didn't have time to clean it up at

all. Still looks purdy to me! Yeah, we watched a double feature of Prometheus and Snow White

at the Skyview. It wasn't actually a double feature. Prometheus was doubled up with MIB3 and

was done. Both were So - So. Neither will go down in history as a classic I don't think. Both

were good summertime big "block buster" type action movies. We had a great time and it was -

once again - a beautiful cool evening. Perfect for sitting out under the stars with friends!
Posted by Mr. Modtomic at 3:45 AM