Green Shag Booth 44 Needs Some Shelving For The Smalls. Habitat For Humanity ReStore To The Rescue! Status: Bargains! 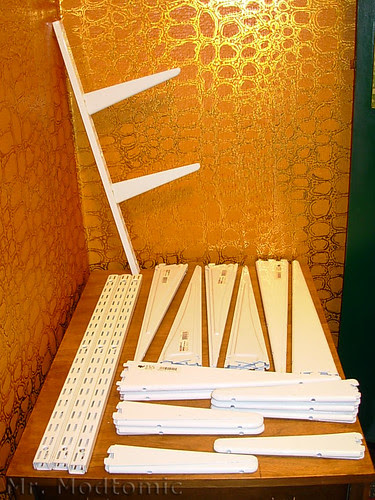 After loading in the first wave of items into my booth space at the Green Shag Market Antique Mall I stepped back and took a good look at what was what. Something was needed. I really don't want to clutter every table I bring in to sell with inconveniently placed smalls. Shelving would be required! 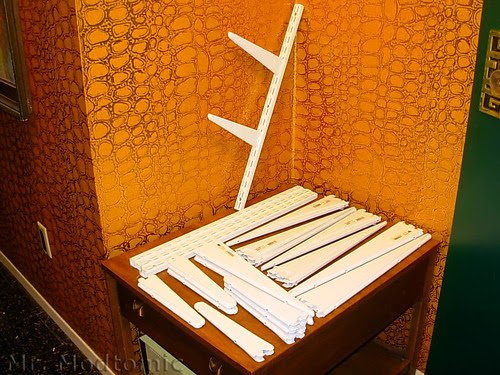 This fine lot of shelving supports was my first lucky haul. I had dropped by the St. Louis Habitat

space at the Green Shag Market) hoping to find some way to adequately display smalls. I didn't

find anything and was about to leave when I did the least manly thing I could think of: I asked an

employee for help. Much to my surprise my shameful break from machismo netted this lot of

shelving supports and brackets (all still in the back room)! Grand total? $10. This would cost 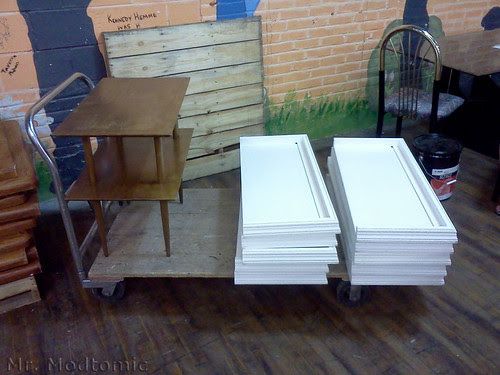 lumber for the shelving and being taken aback by the minimum $50 for just the wood!  For a

be featuring the little table later but the shelving was a super score.  $3 each piece!  We walked

all what I was looking for.  I picked one up to inspect it and another shopper walked up asking

if they were priced.  They weren't and we all just sorta hemmed and hawed over the lot.  After

about 30 seconds I decided to strike that iron while it was still hot.  I took the one shelf I had in

my hand down to the check out for a price check.  At only $3 each they were ALL coming

home with me!  Two other shoppers made a pass at them after we loaded them up on that

flatbed!  Sorry, he who hesitates and all that! 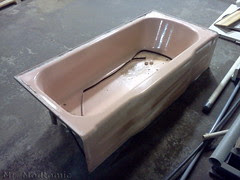 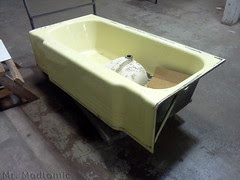 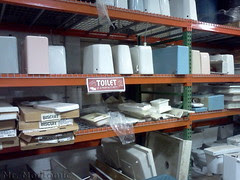 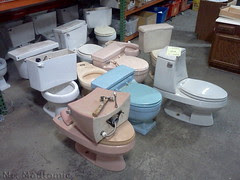 Just for fun I knocked out some photos of some of the other stuff laying around.  This place can

be a treasure chest or a complete bust...just like any thrift store.  There were (and probably are)

some good items around the joint this particular Saturday.  I looked all over for some peg board

hooks before the Girlfriend informed me that she had a whole big bag of them back at home.

Oh well, it gave me a chance to look all over at the other stuff!  Needing a blue tank cover for

your toilet?  Got it.  Yellow matched set of Sink and Tub?  It's in stock. 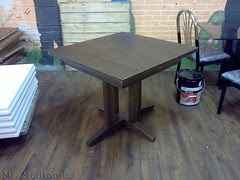 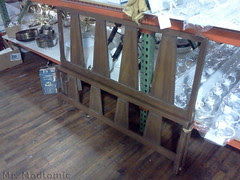 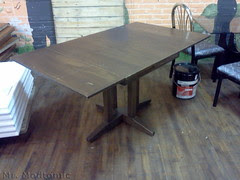 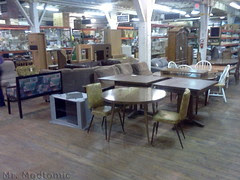 There was also lots of furniture to be had this particular weekend.  Not always the case but

people were bringing out complete dining room suites when we arrived!  Nice ones too, though

so not my style.  The Girlfriend was totally smitten by the hidden leaf tables above.  They were

pretty cool but of questionable quality.  They might have just needed a little TLC.  I liked the style

though.  If we were in a Craftsman style home I'd have loved to try one (they had like 4!) out. 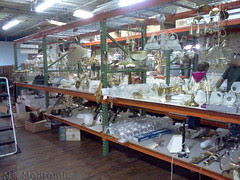 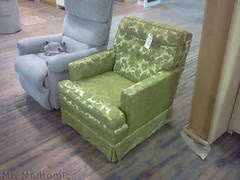 There's always tons of lighting, both vintage and contemporary, available and check out that

vintage green chair!  It was in fine condition. No idea what the price was but it was (is?) probably

pretty cheap!  It's worth your time if you are in the area to pop in a couple times a month.  You

just kinda never know what's gonna be there, but rest assured...it'll be a bargain!
Posted by Mr. Modtomic at 2:03 AM