I Know It Seems Like Deja Vu But I Don't Control What The Thrift Gods Drop In My Lap! More Dorothy Thorpe Style Stuff And A Starburst Pyrex Decanter. Status: Cleaning Problem...Help? 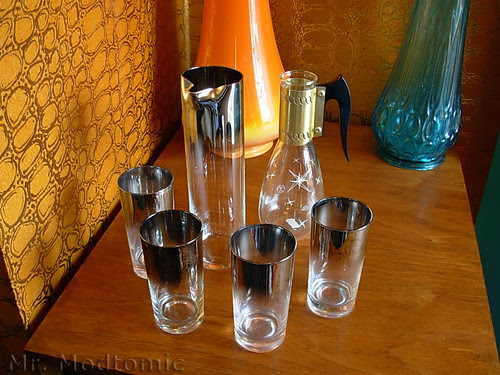 Again, I found this lot over at the St. Charles Goodwill. I know it seems like I'm over there all the time but I (again) had taken the day off because I needed to take the rest of my vacation days from work lest I loose them at the end of the year. I finally remembered to go over to a shop in "Old" St. Charles that deals in some VERY interesting antique restoration items to pick up some caning for a project I'm working on and for realz, the Goodwill is on the way back to the highway. How could I not stop? 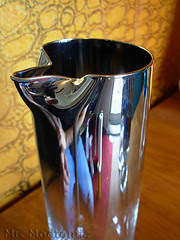 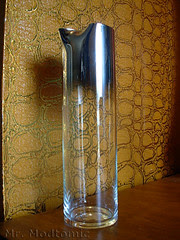 Man, weekday thifting is GREAT!  I got some amazing items.

I picked up part of this set last Thursday I think.  At least I

picked up four other chrome fade highballs from the same

Goodwill.  Seems like a big coincidence if they aren't part of

the same set.   The tall Martini mixer is in excellent condition

and so are the four additional Highball glasses except the

Highballs have what I believe to be hard water dried on marks.

most anything off anything.  No dice.  Now I'm soaking one

as an experiment in a solution of water and CLR.  No luck

yet but I'm gonna let it soak overnight and see what happens.

I'll probably wake up to find all the chrome stripped off!  I'm

willing to take that chance to find out if this will work for you! 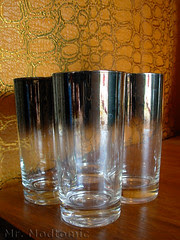 This is the same Goodwill where I found that terrific lighted

globe on the Lucite base a few days ago.  While I was there on

this particular visit I spotted a nice TV stand.  I have a co-

TV stand, knowing that I frequent the thrift stores occasionally

as well as craigslist.  It was a good bet on his part that I might 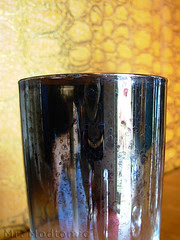 find one sooner or later.  So yeah, I spot this TV stand but I

and texted it to him letting him know I need a yes or no ASAP.

off the TV stand.  Really?  I texted him back to let him know

the bad news.  Then I decided to ask the tag holder if they'd 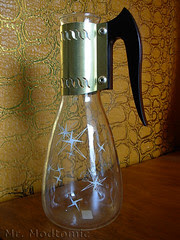 be interested in "selling" me the opportunity to buy the stand

for $5.  She was more than happy to just give me the tag but

I was determined to Pay Up!  I really had to convince her to take

I just gave it to my co-worker as an X-mas present.  He used to 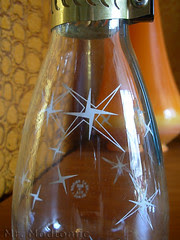 year.  It was the least I could do! After paying for and loading

out the TV stand (I wasn't taking any more chances!) I went

back in to get the vintage goodies.  The last thing I found was

this neat Pyrex starburst decanter.  I spotted a pair of these

exact decanters still in their packaging at an antique mall while

on vacation last summer but didn't buy them.  I've already got

some others like this too.  Oh well...toss them on the growing

pile.  I need to gather some of these extras up and put them on

up after the holidays though.  ::shrugg::