The Trilogy Is...Complete, Young Jedi. Embrace Your Desire And Join The Enlightened Side. Status: No Prequels, I Swear. 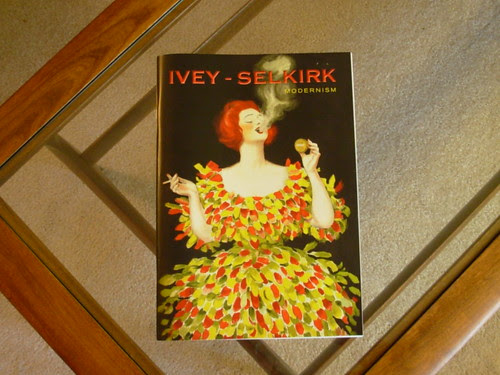 Ah...the final installment of our tour of the pending Ivey - Selkirk Modernism auction this coming weekend. Did anybody "Get" the intro line? Eh...it might be a little "guy-centric". Step inside for a last look around the floor before the sale. Don't forget that you can go to the Ivey - Selkirk website and see their pics of all the items being sold as well as the expected hammer price. Also don't forget about that 18% buyers premium! 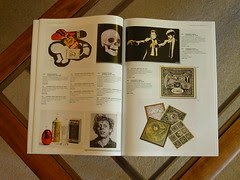 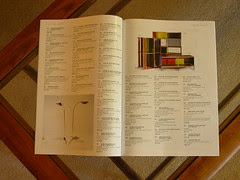 of the pending Modernism sale.  I didn't realize until I got to paging through it yesterday that

get this very nice catalog together!  Mark had approached me asking why I was taking

me one!  Nice people these folks.  I may inquire about including a few pieces in their next

modernism auction if this one proves to be a good experience! 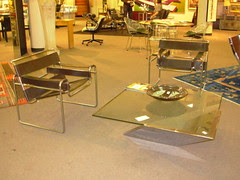 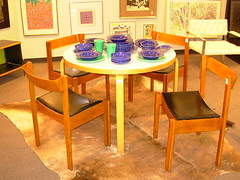 dangerous, all cantilevered and glass!  Looks pretty good next to those Wassily chairs.  Funny

how they look so '70s even though they were designed in like the 1920s!  Again, this is my

issue with the whole "Mid Century Modern" label.  The '20s were so not in the middle of the 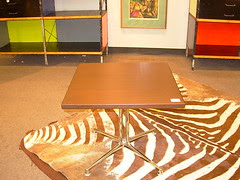 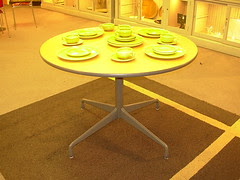 Life building new York in '61).  I think it's base can also be used to support the La Fonda chair

which I'd be just as happy with as the ubiquitous shell chair.  The Eames Segmented Base table

may be plain and simple (especially in gray) but it sports an elegance and honesty in it's design.

I wonder if this example has been painted. 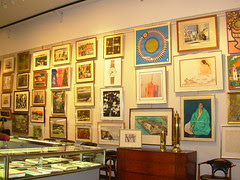 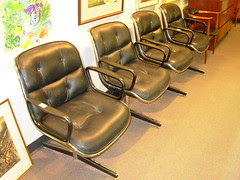 See, lots and lots of art.  I didn't want to picture the artwork in to much detail.  I feel a little

cassettes like when we were kids, but more personal.  I'm not the biggest fan of Pollock chairs

so I'm interested in seeing what these and the loose ones go for.  If they sell for more than I

suspect they will I might include a couple of my Saarinen office chairs in the next sale. 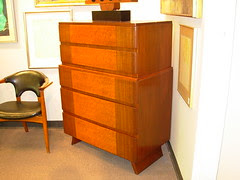 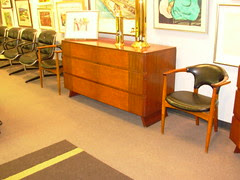 These two dressers are attributed to Eliel Saarinen, father of Eero Saarinen (the designer of the

the Gateway Arch!)  They have a very nice '40s modern look to them.  Manufactured by Rway.

Wouldn't it be amazing to have a set of bedroom dressers designed by such a noted architect? 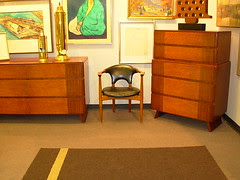 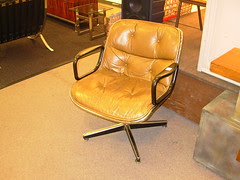 in the catalog.  They are certainly unique.  They have a very nice sculpting to the armrests that

lends them an expensive look.  I can't seem to ID them or even find a comparable on the net in

my 15 minute perusal.  The seats have an Eric Buck look to them but that's all I got. 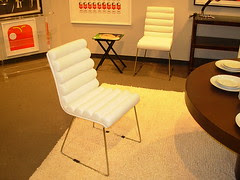 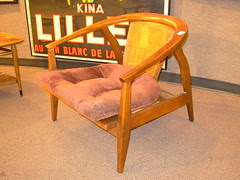 comfortable!  I'm partial to the lounge chair.  I'm not sure that the cushion is original but it looks

like it works and can be easily replaced since it looks like a standard patio seat cushion! 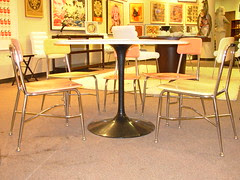 drag it down in a heartbeat if I could place this big brutalist piece in it's stead. The tulip table

isn't a genuine Knoll or at least that's the impression I get from the listing.  To most of us that

just means we can afford it, right?  Like I said in my first posting on the sale, there seems to be

something at this sale for every budget!
Posted by Mr. Modtomic at 3:48 AM