Mash Up! Picked Up A Lil' Sumpn' Sumpn' On The Way Home From Work Halloween Night. New Seating For The Livingroom Lounge? Status: Needs Proper Cleaning 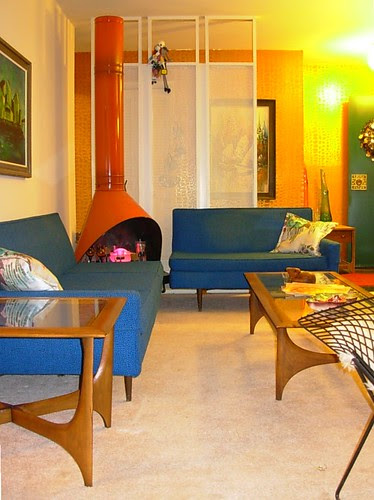 I gave ya a little tease / peek of this new set a few days ago and got so wound up about it that I spent that whole evening / early morning moving out the other sofa and chairs and setting it up in the living room. I just had to get some pics! 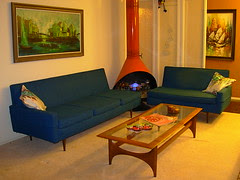 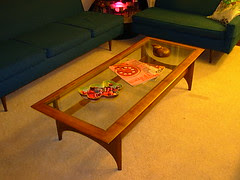 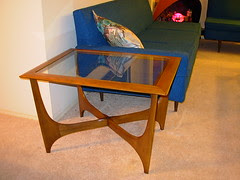 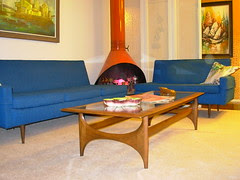 Oh yeah, got some new living room table last weekend as well! I can't seem to ID these

other than knowing they're Lane. The name of the line eludes me. These are keepers. At

least for now. I picked them up at an estate sale last weekend that was FULL of Broyhill

Brasilia but was priced just a little too high for my comfort. Oh...and it was Brasilia II,

not the original Brasilia line. More on that later. I grabbed up these two tables plus a third

that needs a little cleanup and a new piece of glass cut for it. I think its glass must have

dust. It's shaped like a rounded triangle or guitar pick so I'm hoping that having glass cut

for it won't be too expensive. 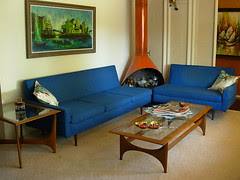 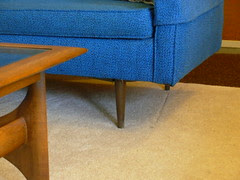 The sofa sectional was listed on craigslist at about 8pm and the seller included a number. I

the other person plus I'm never comfortable making a cold call for items on craigslist. Since

it was a slower, quieter day I thought I'd go ahead and call the seller to see if I might be

$$ than his asking) at him. He was happy to let me pick it up as he was actually going to

have to move it that night to his new apartment if I didn't pick it up! Win / Win! 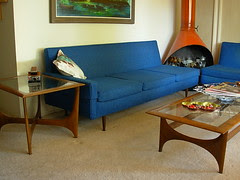 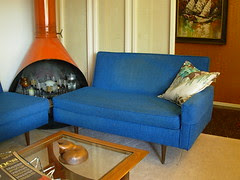 One of the greatest advantages of this type of furniture is how easy it is to move. OK, it

was still a chore to move this out of a 1940's apartment building, but less so because of

the diminutive dimensions and lighter weight construction of these pieces. It did take both

of us to get this down a winding, narrow stairwell but it wasn't bad and I was able to

unload the long section off the top of Frank II by myself and into our home. Light weight

construction and it's still in great structural condition after what...50 years? Nice. 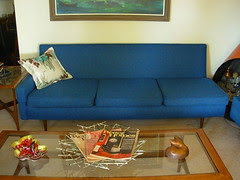 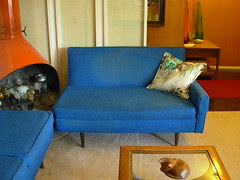 So, it's not completely perfect though. It did have a missing leg. The former owner had

the leg which was not damaged at all but had been pulled free of the base structure. The

screws that held it tight had been pulled out and the holes stripped. No problem. I tried

a variation of an old trick I've seen work before. If you have a wood screw that has

stripped out of its hole...push a few toothpicks into the hole and re-screw the screw

back in. It'll hold until you can do a proper repair. Since these were pretty big screws

medium pieces of that. The leg still needs to be better fastened (glue) but is now solid. 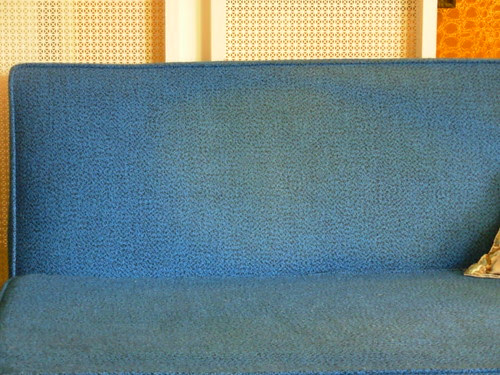 Another possible issue is the discoloration on the backrest of the short section. I made a

this. If worse comes to worse...I'm thinking that I might take some material off the back

to fix the front and replace the back with something else. Just a thought.
Posted by Mr. Modtomic at 3:28 AM