The Goings On Down At Booth 44 - Green Shag Market. Sometimes It Seems Like It's A Revolving Door! Status: Open 5 Days A Week! 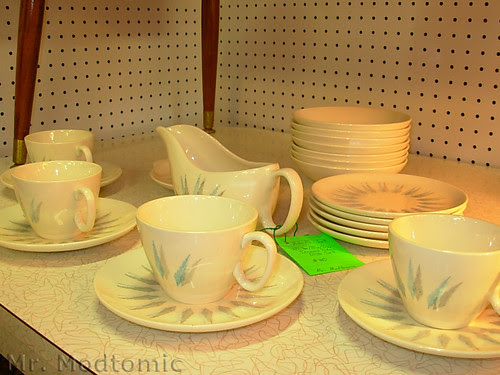 Not like yesterday "last weekend" but the weekend before you'll remember that I picked up a bunch of smalls at the Cornbread "Worlds Largest" Garage Sale. A couple of those items got dropped off at my booth at the Green Shag Market right away. The Avocado Green porcelain coated cast iron fry pan and a Large orange lava glaze planter sold so fast that I wasn't sure if I even brought them to the booth! I never even got a chance to photograph the planter!

Then there was the Fiesta dinnerware. I took a large, somewhat random set of Fiestaware

to my booth and it lasted like maybe uh...five minutes. So that's why I brought in the blue

and grey diamond pattern coffee set above! I don't have any dinner plates for it but any light

blue or grey plates would look great with it. I had been holding onto the set hoping to find

the matching plates but it's just not happening...so there they are! 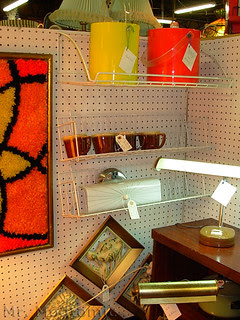 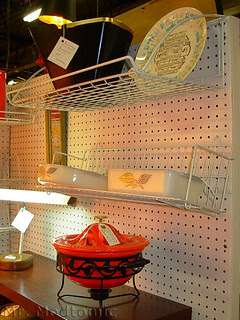 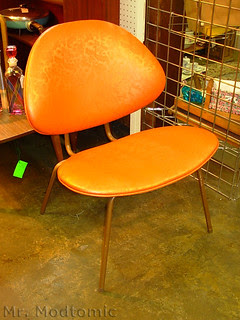 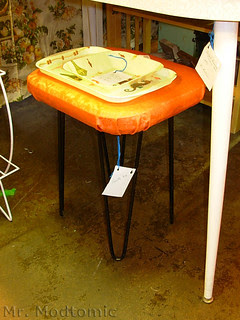 surprised when I find empty spaces where items had been.  I try to get in a couple times a

spots.  But I'm not sure that's the best way of doing this.  I guess it's good to have new items

Tuesday, but I have the nagging suspicion that I should be in there on like Thursday, you 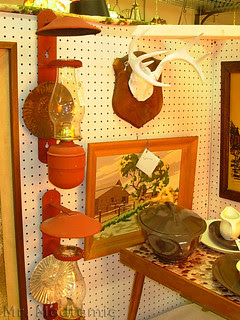 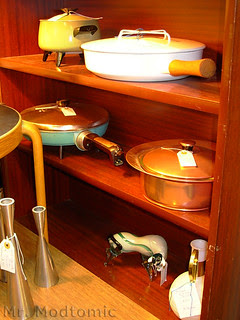 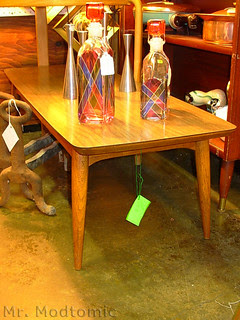 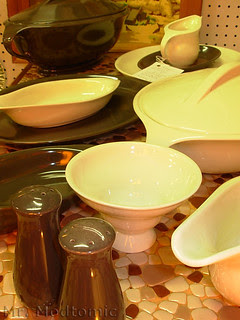 You know, I thought that I'd have much more of a problem keeping the Booth 44 from

becoming too cluttered, but once I found the balance I like it's pretty much self sustaining.

As an item makes it's way out, I just look around the pad for a similar item to replace it or

asses the space to see if a new arrangement is in order.  I REALLY Like to keep it fresh.

I'll even pull an item that seems like it's been in too long and replace it with something similar,

but new to the recurrent shopper.  The limited space keeps it challenging.  I'm a guy who

like to pack the car or a moving van.  I like to think I've got pretty good spatial acuity. 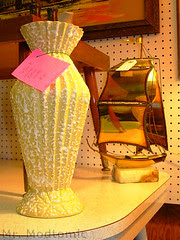 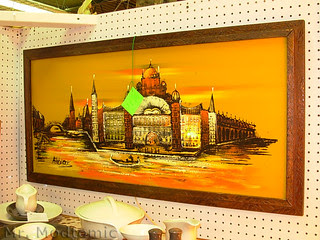 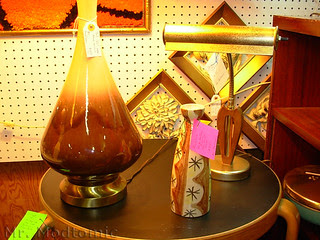 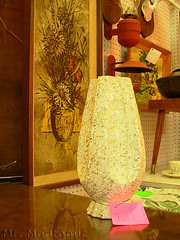 I'm having a ton of fun doing this and it totally isn't like work or an obligation at all.  I love

when the shop calls or texts me that a large item has moved.  I get to start the wheels a

turnin' trying to figure out what to drop in there next.  I found a little room for the couple of

retro vases that I picked up at the Cornbread Garage Sale. I pulled out the pair of paint by

numbers Jesus and Mary and replaced them with a large colorful lighted painting of Venice.

It's really got like tinkle lights  inside it behind some colored clear plastic.  So kitschy 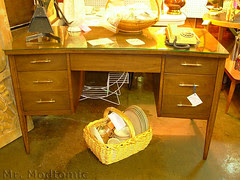 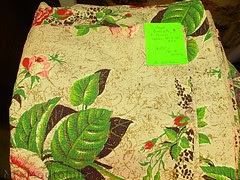 The Broyhill Saga knee hole desk is still available.  I like that it's here because it really catches

browsers attention, even if they aren't looking to haul something that large home AND with

about scratching the surface!  I only just recently found these four panels of barkcloth at

Unique Thrift.  Nice color and subject, I believe the flowers are called cabbage roses.  Too

bad I didn't display the pattern in such a way so that you could actually SEE said roses!

How clever of me.  No worries.  I fully expect to find these in an unfolded mess next time I