I Dropped By An Estate Sale This Afternoon Before Work Hoping To Pick Up What I Thought Would Be A Cheap Dining Table And Chairs. Sometimes A Little Bit Of Knowledge Can Be A Lot Of Trouble. Status: Estate Fail. 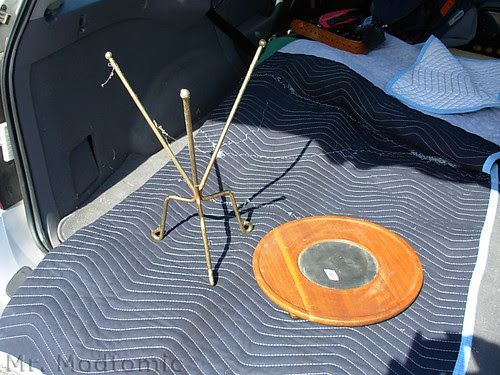 All I ended up buying was this.  Two little pieces.  I held a tiny bit of hope that a dining table shown in the online pics, one of the few interesting items at this sale, might still be available even though I made no effort to get there early.  Well, it was still available...and probably still is.

I didn't think much of it, but the private estate sale sellers certainly did.  I was surprised to

matters either way.  When I spotted the price I kinda chuckled a little and one of the sellers

asked me what I thought of the price.  I told her I thought it was kinda optimistic and that

they'd have a REAL hard time selling it for that.  I told her that I was only interested because

I had some similar armchairs and would have liked to ad them to this set.  She asked what I

paid for the armchairs and well, it was A LOT less than three grand!  She then went to get

another of the seller and asked me to tell repeat what I had told her.  Suddenly I realized I

seller what I thought though, "It's Walnut, Vinyl and Formica (the top of the table is Formica!),

not Teak, Leather and Rosewood.  Nobody's gonna shell out thousands for this.  Just my

opinion.  I could be wrong."  She said that she had seen these chairs (Lawrence Peabody

for Richardson Nemschoff...they were tagged on the bottom) selling for like $800 each online.

I knew right then it was pointless to try to dissuade her.  She had probably been to 1stDibs or

a similar site.  It was too much trouble and I just didn't have the time.  The set is probably still

there if anybody has more money than sense. 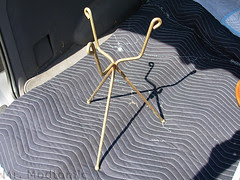 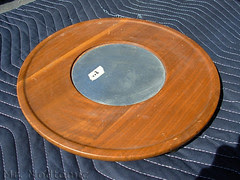 But I did manage to find a couple of smalls.  It wasn't a totally wasted trip.  I found these in

the basement.  There was also a danish style lounge chair for $85 that had crushed cushions

and a "finished" finish but good bones...I just didn't have the wear with all to buy it at that price.

scenes.  I like that stuff but I didn't buy any of that either.  I really was only hoping to pick up

the dining table and make a quick once through of the rest of the house.  It was still fun.  I like

to get my shop on before work sometimes!
Posted by Mr. Modtomic at 1:39 AM