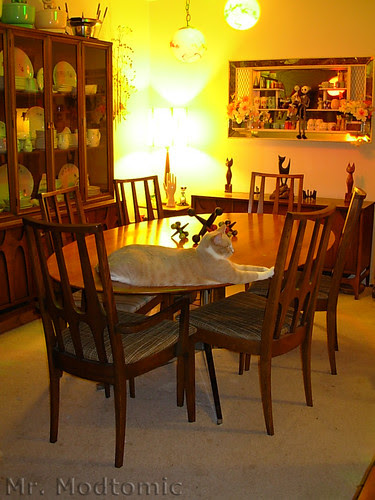 I FINALLY got my new (to me!) table installed in the dining room this evening. It wasn't as easy as just pulling out the original Broyhill Brasilia dining table and bringing in this lovely behemoth, oh no. Nothing is ever THAT easy. I actually started getting things ready last night!  But it was worth it.  Look how much King Larry / McDuff loves it already! 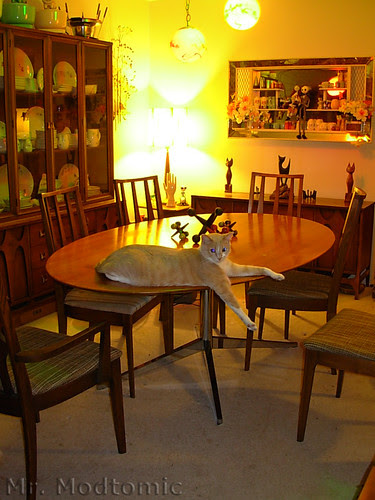 Oh yeah, McDuff the Fluff is down with the Florence Knoll Dining table! He's not so happy 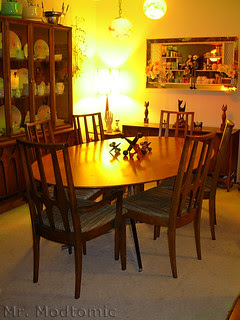 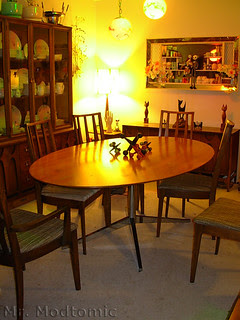 One issue. I did not expect this. The Florence Knoll table is about 2" lower than the outgoing

Broyhill Brasilia. When I picked up the table from the seller last week I noticed that he had

these small hard rubber "pads" under each of the table's feet. I just thought that he was using

may have had them to ad a little space under the table for peoples legs! I might have to invest

in something similar soon. I tested the Brasilia chairs out and found the table height fine but I

got skinny legs. It could use another inch at least.  I didn't think I'd like the look of the Brasilia

chairs with this table but I was pleasantly surprised!  Looks nice, don't you think? 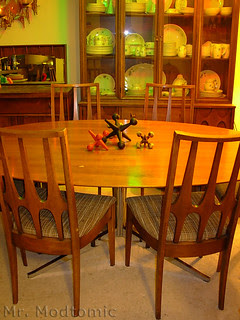 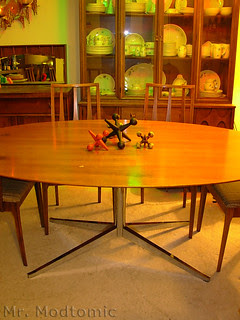 The top needs to be refinished eventually but it'll do for now. It's a little bit lighter in color than

the Broyhill Brasilia but it's close. Ain't it just so purdy?!  I've been dreaming about getting this

table for years.  I found one in New Orleans a year and a half ago but it had a laminate "boat

shape" top, wasn't marked in any way and had chrome plating chipping off one of the legs.  The

seller only wanted $100 for it but I just couldn't pull the trigger.  I told them what they might have

availability.  Don't know what happened to it.  This one though, I know where it ended up

and where it'll be for a long LONG time to come!  I can't imagine finding a dining table I'd