Yesterday Was A Heartbreaking Day At The Modtomic Ranch. Status: Sad. 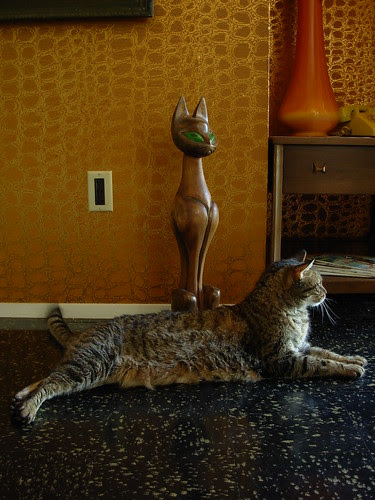 Sorry for the downer post. We had to put our little bundle of love down yesterday. I've put together a little "tribute" video of some cute pics I had of him.

we might be able to help him with some prescript. drugs and diet, but he got sooo

bad last week that we had to take him in for emergency care. They got him back

on his feet and gave us another good week with him. He had a very good last

The song (I will follow you into the dark - By: Death Cab For Cutie) pretty much says it all.

long time. Full disclosure...Kennedy was actually the Girlfriends Kitty and I only

came along after they were together for about 3 years. But we were good buddies

for about 8 years. I think he thought I was his brother. I loved him like he was my

own. The girlfriend has been a little bit of a mess, she's been with him since he

was a little bitty guy. We were both with him when he passed and cried and cried.
Posted by Mr. Modtomic at 12:21 AM