Another Compilation Of Chair Posts. It's Stupid How Many Chairs I've "Gone Through"! Status: The Next Ten 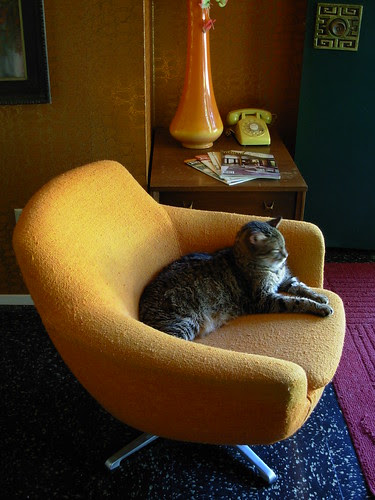 Awe...those of you who are new to Mr. Modtomic's blog may not recognize Kennedy.  He was our kitty for many years (more so in the Girlfriends case as he was around before I was) and we had to let him go to the big catnip field in the sky last year.  It's still a little heart wrenching to see pictures of him unexpectedly.  He was the best cat ever.  But even so, the Girlfriend is chompin' at the bit lately to get another.  So that this chair is up next, with Kennedy posing rather proudly, is kind of a coincidence! 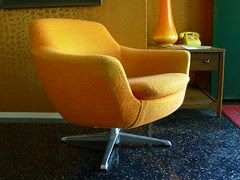 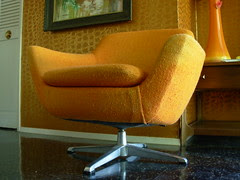 This Overman Swivel Lounge "Pod" chair was a great craigslist find.  It wasn't a super bargain

but it was priced fairly.  I drove out just at dusk to meet the seller and procure it.  What I didn't

realize in the dark was that it was covered in pet hair!  It was pretty easy to clean up and

to a new owner there.  This happens a lot.  I almost always take a load of this stuff with me to

New Orleans.  There are those down there who love that I do this and probably some who

hate it (my ads get flagged pretty hard). 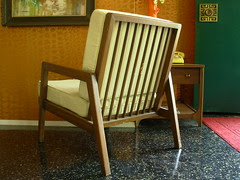 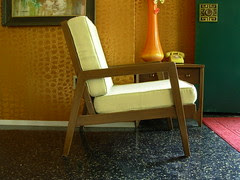 I think I picked up this somewhat conservative lounge chair at the St. Charles Goodwill or

maybe Salvation Army. I can't remember. Shoot I didn't even remember the chair at all until I

re-read this posting! The chair came home with a bunch of other items that were probably

culled from both of those "traps". It didn't stick around long. It's solid construction, simple lines

and firm cushions helped it find a new home quickly. 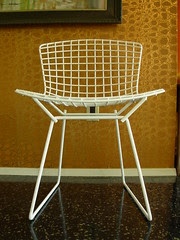 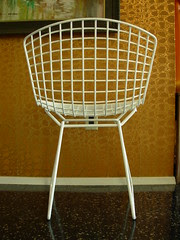 These Knoll Bertoia side chairs, like the Erik Buck barstools, where long in coming to the

Modtomic Ranch.  I had been pining for a set of these so much that I had been considering

bidding on various sets on eBay.  Then I spotted a set of "patio chairs" on the Kansas City

to pay on eBay.  Sold.  A road trip was in order!  A long, wet, rainy roadtrip.  But I finally

got my set of Bertoias! 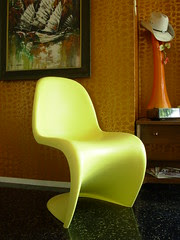 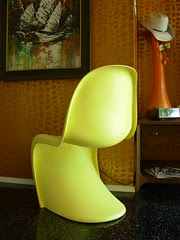 Ah, the Panton "S" Chairs.  These caused a little bit of controversy here on the Mr. Modtomic

blog.  The seller had listed the four chairs on craigslist @ $25.  It was difficult to discern if the

seller meant $25 each or for all.  I assumed it was each and (ostensibly) offered $125 if they

could drive and meet me half way.  An over offer never hurts your chances when a seller gets

multiple e-mails.  So yeah, I got them...and that really pissed somebody off! 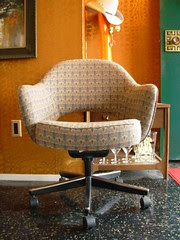 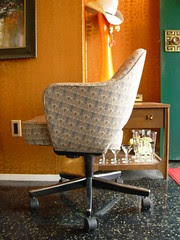 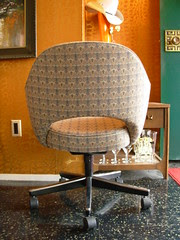 conference table. They didn't come cheap...at least by my standards, but they are superior

quality executive chairs. I'm sitting in one right now. I still have all six that I bought. They are

the right person will see them and just have to have them! 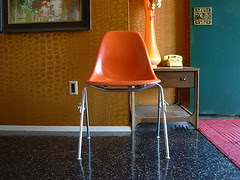 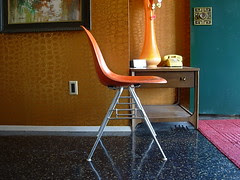 amazing home. He really wanted this desk! I kinda wish I had kept the Shell Chairs! Eh, it all

works out in the end. These chairs have made their way on to a new owner in Columbia Mo. 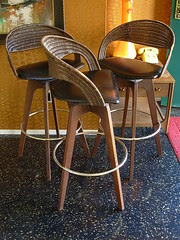 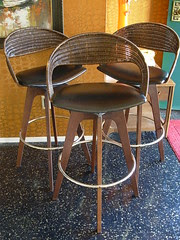 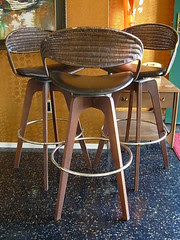 OK, so maybe these aren't technically "chairs", but these are some sweet vintage modern bar

stools!  I haven't any idea who made them or if they are designed by anybody important.  In

fact, I've never seen any very similar to them at all!  I think these will be available on one of my

ads shortly as they have been usurped by the Erik Buck bar stools!  They have served me well. 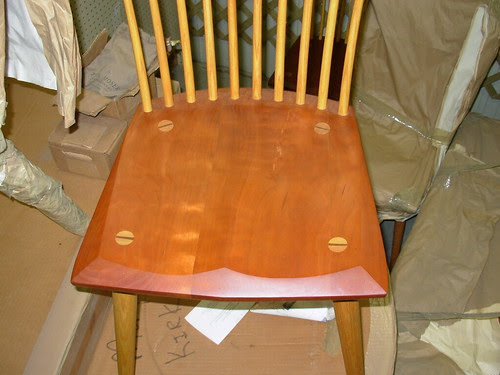 Nope. These Thomas Moser dining chairs were not purchased and never made their way home

with me. I didn't even know what they were when I spotted them at the Peavely Flea Market

that day. I just knew that they were obviously of superior quality and workmanship and that I

better get a picture or three of them to take home so I could do a little research. I went back.

They were of course gone. Boy did I have a sad. :( 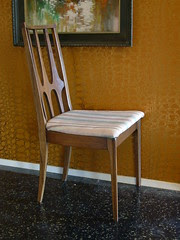 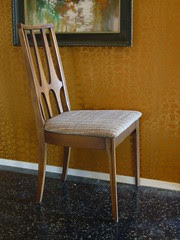 Well, since I found our Broyhill Brasilia dining chairs and the rest of the set, it turns out I didn't

happy with our Brasilia dining suite.  As a matter of fact, it probably would take a Thomas

Moser dining set to crowbar the Brasilia set out of our dining room!  Check out this before 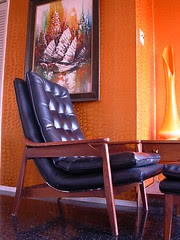 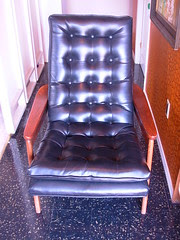 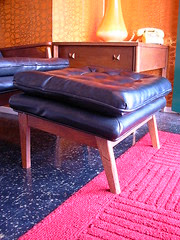 I picked up this nice vinyl and walnut lounge chair from another craigslist ad. I also ended up

buying some really nice tables that the seller had in the garage too. They were just trying to

clean out some "old" stuff. I was happy to help! This has made it's way to a happy new home,

though as I recall, we had to take it all apart to fit into the new owner's car...while it was

raining. No worries, we were under an awning down at the Frozen Yogurt shop where I

So there ya go! Ten more great seating choices that have come and gone (mostly) through the

a posting that you missed before or maybe because you are new 'round these parts. This time