Nothing So Exciting As A Finn Juhl Dumpster Find Today (See Yesterdays Post!). Nope, Just A Quick Coffee Table Cleanup. Status: Subtle Before And After. 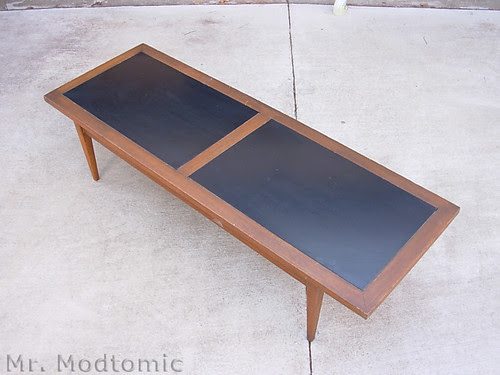 Before
This is the coffee table that I picked up (craigslist) before work last week.  The one where the seller was carrying out the coral vinyl barstools (thoroughly cleaned the vinyl last night...look Sweet!).  Even though the seller had wiped it down to knock off the dust it was still pretty dirty.  Enter Murphy Oil Soap and Howard's Restore-A-Finish. 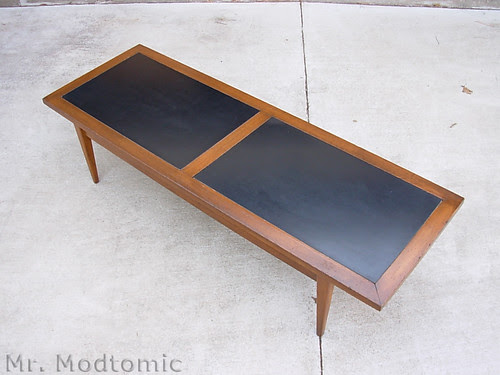 After
Yesterday sucked.  It was actually cold.  Really cold.  Today?  Right back to Spring!  I think the

high was like 65 or something.  So I dragged out this table and hosed it down with the Murphy

Oil Soap to clean off the rest of the dirt and detritus.  You can almost hear an audible sigh when

these old birds get really cleaned for the first time in years. 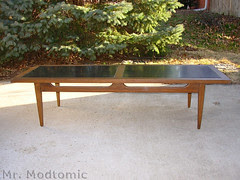 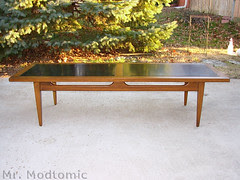 The table cleaned up real nice.  It's kinda hard to tell from the pictures.  I should have shot some

well, you do what you can while you can.  After cleaning the wood with the Murphy Oil Soap I

cleaned the black formica inserts with Pro Green Kleen and hit the frame with the Howard's.

Gawd...I'm such a shill.  For real though, all this stuff works great...and noooooo, I'm not a paid 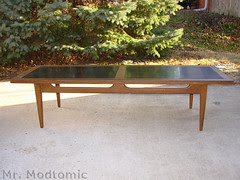 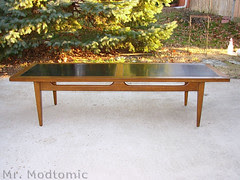 I picked this particular table up a. because it's a cool looking table, b. I get lot's of requests for

long low coffee tables, and c. it was cheap and I can pass it on cheaply!  So, like I tell everybody

who asks if I have a particular item but don't...it'll end up on the blog first, so if you see it there

ASK me about it then.  He who hesitates may never arrive...or get that long low coffee table

they've been looking for! 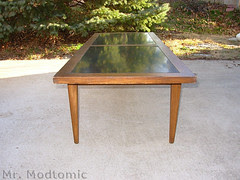 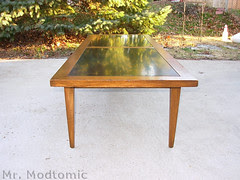 I probably won't get around to dropping it on my c-list ad(s) right away, along with the recently

featured pole lamp and a couple other choice items, but it'll happen soon.  I imagine this table

will "go" quickly too since it seems so many people need one...and it's a good looking table.  I

don't know what company made it.  I didn't see a mark or label on it.  It's pretty solid but it's

not very heavy.  The two black panels are removable. 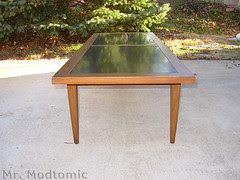 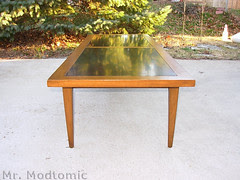 So the table isn't 100 over 100. It's in good vintage condition. There are bumps and bruises in

the wood. It's been around the block. I'll be asking a price reflective of this. The Howards did

a wonderful job of visually blending the darker and lighter areas as well as the light scratches.

It's cool like that. All the hard work is done. Now it just needs someone to drop in front of

Email ThisBlogThis!Share to TwitterShare to FacebookShare to Pinterest
Labels: Before and After, Craigslist, How To, Refinish, Table, Vintage