Fellow Blogger "The Nomads" Over At She Finds Retro Contacted Me About A Strange "Brasilia" Table. Status: Mystery....Solved? 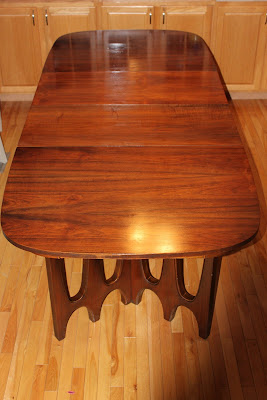 So since I put out the e-mail address to hit me with any crazy furniture ID inquiries you might have I've gotten quite a few!  I'm not always going to be able to figure things out but if I have the time, believe me, I'm gonna give it a solid shot.  She Finds Retro blogger challenged me (not through e-mail but via the comments on a posting a few days ago) to find out more about this table that she is convinced is a Broyhill Brasilia piece.  Well, I got news for ya....

on them) to be suspicious of a dining table like this that I've never seen before.  Especially

Broyhill Brasilia since I've bought and sold a lot of it and looked at lots of it on the web. 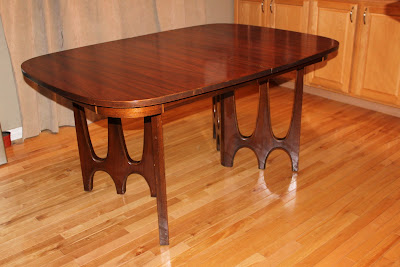 So like any good skeptic, I got my Sherlock hat on and got to searchin' 'round the web to

prove myself wrong.  When it comes to something as cool as this, I'd love to have my

skepticism dissuaded!  I got to looking through Google Images and after going through a

that had been used on eBay but is no longer there.  It shows a table just like this surrounded

by a set of Broyhill Brasilia chairs that are equally bizarre and rare. 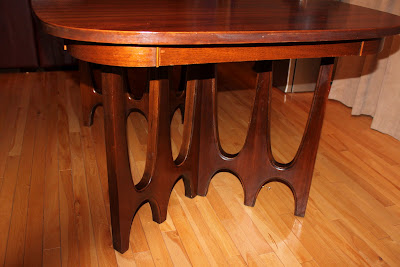 down the back they have two and between them there is caning...yes CANING!  I've seen

the upper edge of the seat.  The set I saw had the original upholstery material (gold, checks,

birds) so I feel very confident that they were in fact Broyhill Brasilia. 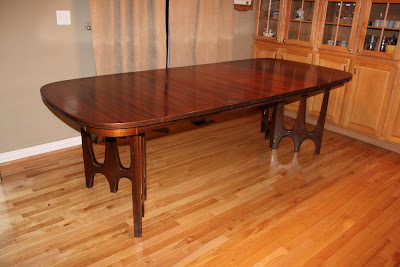 and is at a loss as to how to price the set.  Based on the chairs that I've seen, I'm going to

document of the Broyhill Brasilia catalog that is floating around the web.  I think this is from

special since it appears to be pretty rare.  She says in her blog post that she has the matching

credenza but hasn't pictured it yet.  I personally can't wait to see it!  What do you think about

(all photos by She Finds Retro and used by permission)