Quick Lane Acclaim Refinish. Found This Pair At The Salvation Army And Thought I'd Tidy 'Em Up. Status: Check Out The "After" And You Tell Me! 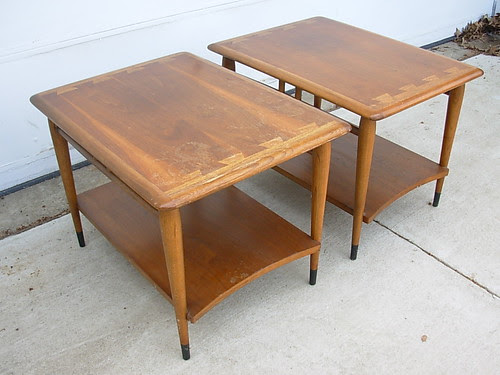 Lookin' kinda rough as purchased! They were cheap enough that I thought I could do very little harm in attempting a quick refinish job on them. The good news is that they are already nice and solid...just that finish...it's gotta go! See Video Inside! 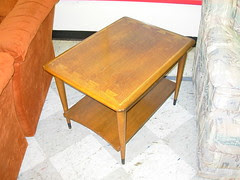 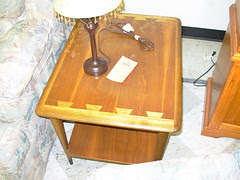 So at first I didn't think I was gonna buy 'em.  I just shot some quick pics to post up here as a

"looky at what's avaiable" entry. Then I went back before leaving and took another look. Since

decided to take a chance on the set. Eh, they were only $40 for the pair. I didn't think I could

mess them up enough that I'd be throwing away good money. 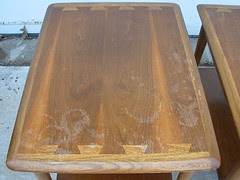 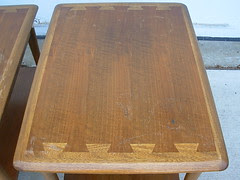 Here's a good set of "Before" pics. Notice the water rings all over the sad things! Somebody 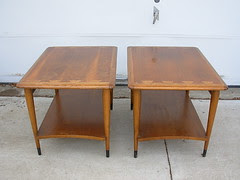 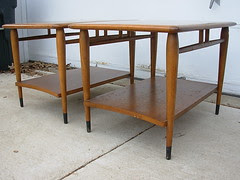 It's a good thing they's cute! They certainly could be used as purchased. You wouldn't have to

worry to much about taking care of them. But, I had bigger plans for these! I went right out and

cheap), a bunch of 0000 Steel Wool and some of that Howards Feed-N-Wax. I haven't tried out

the Feed-N-Wax yet but I've heard a lot of good things about it. I'll be using it on these after the 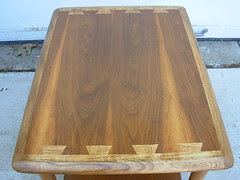 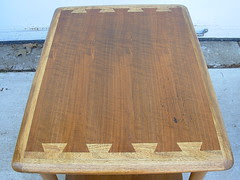 Hey! Where did all those water rings go? It's like magic! This only took 30 minutes...for both

table tops! Used up about a half a can of the Refinisher on both.  I hesitate to say it can save all

the messed up tables out there, but I think it's worth giving it a try! This pair will be available

Here's a little video of Mr. Modtomic in action. This was a 15 minute, one take, start to finish

video...but that would have taken about a week to upload so I made a few breaks and included

a little ditty by a local band (that is sadly broken up) called Tripstar. It's a live recording. I hope

you enjoy both the video and the tune. I tried to include voice over commentary but my mic /

computer combo wasn't being cooperative. Let me just say this. All you got to do is pour a little

of the Minwax Antique Furniture Refinisher into a bowl, dip a pad of 0000 steel wool into it and

"scrub" the old finish off. 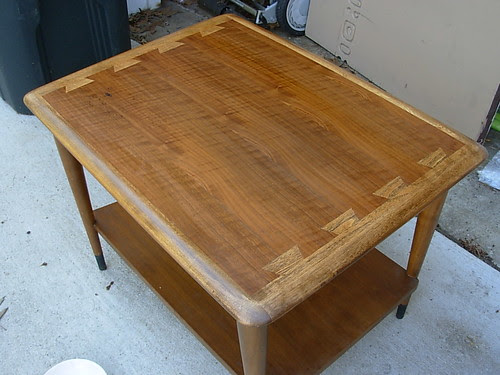 The longer and or harder you scrub, the more you'll strip the original stain off and lighten the

look, at least so it seems with this mass produced and likely "tinted" as apposed to stained

pieces. You gotta be carefull with this acclaim stuff because if you strip the edges too much

they turn a VERY light color which makes the piece look obviously refinished. I prefer the

dovetail details.
Posted by Mr. Modtomic at 5:26 AM

Email ThisBlogThis!Share to TwitterShare to FacebookShare to Pinterest
Labels: Before and After, Craigslist, Danish, How To, Refinish, Table, Thrift Store