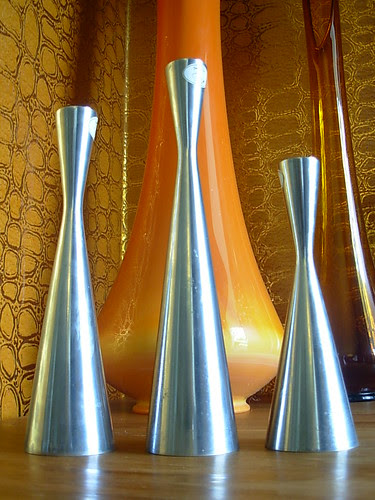 I am not a fan of Ikea. I'm all too happy NOT having a Wal-kea here in St. Louis. That said...I do like a lot of their stuff...But Don't Let That Get Around! I'm about to get up on a soap box a little here.

The biggest issue I have with Ikea isn't even Ikea's fault. It's the consumerism it thrives on. Just

like Old Navy, Ikea can only keep selling as long as today's sold item is SO yesterday's sold

item. We all go to thrift stores right? I can't speak for the women's section but the men's section

is absolutely rife with Old Navy stuff. I really wish I could get some of my non-thrift friends to go

very well to buy almost new clothing for next to nothing and look really good. But since none of

this is purchased with the expectation of keeping for more than the season it's "cool" to wear,

so much get discarded. While I don't pretend to have definitive proof, I suspect the same

happens in cities "lucky" enough to be "blessed" with an Ikea. I have checked out the website

and have noticed how lots of items are only available for a short period of time, like these

candlesticks. I get the feeling that avid Ikea shoppers notice when the New comes out and the

Old disappears and well...out with the old, in with the new. It's really so cheap, how could you

that some of it is beautifully finished and durable but I get the idea that most of it isn't. Judging

from what I've read on Apartment Therapy, people land pretty far on either side of the love /

hate line. There are all kinds of human rights and environmental issues that more well informed

pundits than I can get into as well.


Whew...THAT SAID...look at my pretty new (used) candlesticks! Not sure if I'm gonna keep

them. They might end up on my craigslist ad at some point in the future, especially since they

are a discontinued item and aren't exactly easy to find here in St. Louis! 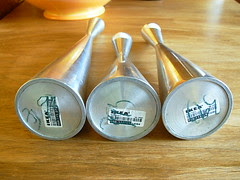 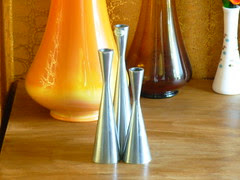 Yup, all the stickers are still there. These are pretty substantial too. I'd hate to get whacked on

the head by one of them ala' Clue. A candlestick was one of the weapons in the clue game,

wasn't it? Anywho...when I first spotted these at the thrift store there were only two of them

together. I passed and didn't think much about them...until I spotted the third. I get weird about

empathizing with inanimate objects. I had to put the "Lonely" third with the other two to keep it

from getting left behind should they get bought (and taken to a loving home...leaving the sad

lonely third there all by itself...who's gonna buy just the one? ::sniff sshniff::). But once I took a

moment to eyeball the set all together I nodded my head and gathered them up to take home. 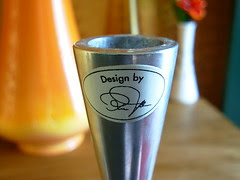 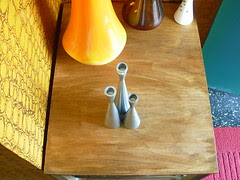 Anybody got an idea who's signature that is? C'mon...don't be shy! Why would someone be so

enamored of these candlesticks that they would leave the "designed by" stickers on them...and

then just donate them to the thrift store? Lazy? 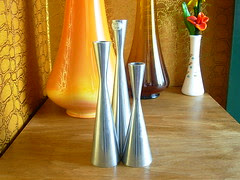 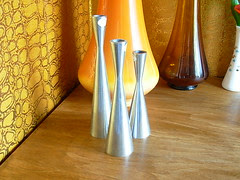 I need some candles.
Posted by Mr. Modtomic at 2:31 AM