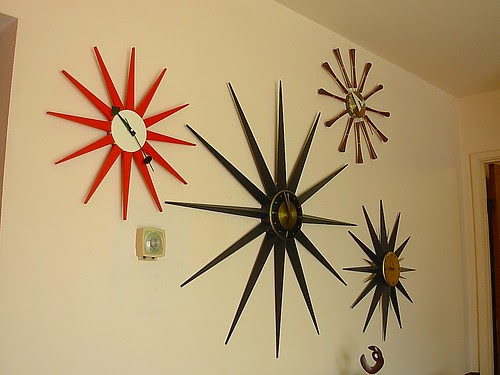 The Big black clock was the first to arrive. I found it on Craigslist. It was just $20! I

the dough through the mail slot! Fine by me. And that's how it went down!

Sometimes people just need to be rid of stuff. It's a wind up 8 day by Welby but

I've never bothered to try it out. 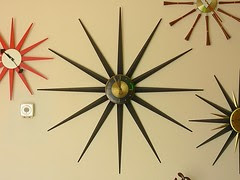 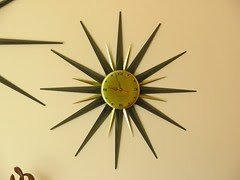 The smaller black and gold clock was next. It came from the Wentzville Flea

Market back this summer. I got it home and realized it was missing a couple of the

gold points so I removed a few more to make it even. I think it looks pretty cool like

this. It's a Westclox "nocord" but it's innards have been replaced with a battery

powered unit. I need to find some better "hands" for it. The ones on there don't 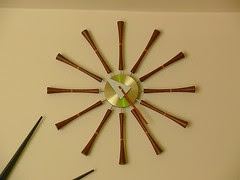 The two above were found just last weekend at the Treasure Isle antique mall. I

bought them the same day I bought the Brasilia desk. I thought I was making out

like a bandit too. They were both in their original packaging though the red one

had been opened before. I was thinking they were the George Nelson clocks from

Design Within Reach that go for like $300 each. Not so, I came to find out. These

paid, $40 each. The red one isn't as refined as the wood grain one, but both are

pretty nice and add much needed variety to the collection!
Posted by Mr. Modtomic at 1:56 AM