It Leans Into Antique-y Pretty Hard...But Wait...Don't I Have A Booth At An ANTIQUE Mall?! Why Yes I Do. Plus The Plant Water-er Thing Is Hobnail...And Hobnail Is Tough. And Scary, Right? Status: Slim Pickin's I haven't had much time to hit the thrifts or c-list this last week.  Oh, there's been lots of good stuff on c-list but I just haven't had the opportunity to snatch it up.  Plus it's nice to have a little room in the house after thinning some out some of the stock lately. 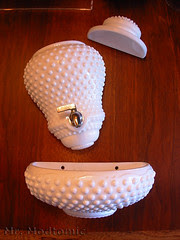 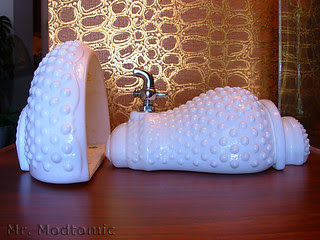 Not only is this milkglass, but it's Hobnail style...AND it's functional.  The valve actually works, so

one could put a real plant in the planter part and keep it alive!  So yeah, this is headed to the booth at

The Green Shag just as soon as I can get down there again.  It may stick out like a sore thumb in my

booth but everything eventually finds it's new home in there. 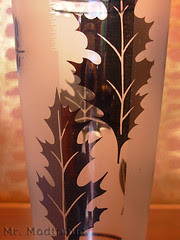 And then there's the ubiquitous Libbey Silver Foliage.  This time four parfait / beer steins.  I count

myself lucky that I found an appreciation for this pattern since I seem to find lots of it around town!  I

found these in a bag behind the bar still wrapped up in paper.  I have no idea how long they've been

back there...and I can't remember where I got them from!  It's almost like Christmas in...August?  All