This Is What Happens When A Modtomitrist Starts Hanging Out In Antique Shops And Antique Malls And Buys Antique-y Stuff For His Mom's Part Of Their Shop! Status: Available! 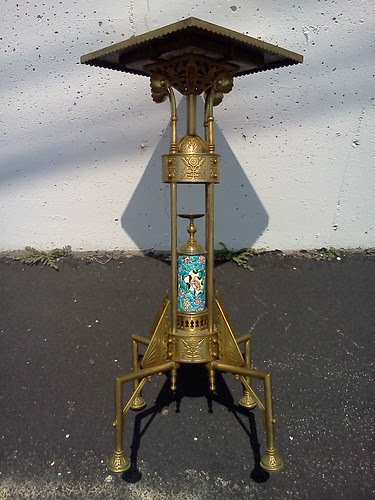 Uhhh...that ain't Modern OR Atomic age. What the What? 'Tis true, Mom-tomic has been such a bad influence on me! It's all good though, 'cuz when the craigs-gods fail to deliver an abundance of vintage modern upon me I can still find a good flip now and then. 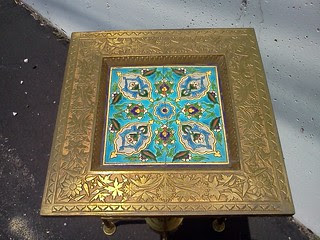 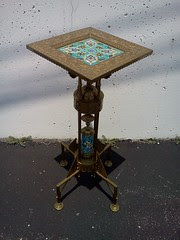 Yeah, I've gotten a little picky about what I snatch off craigslist lately. I find myself passing on items that I would have shot an e-mail off for in a hot second in the past. I've just got more stuff than I know what to do with now, so now a purchase has to be special. A real score. That, I'm pretty sure and despite it's crazy look, is exactly what this is. 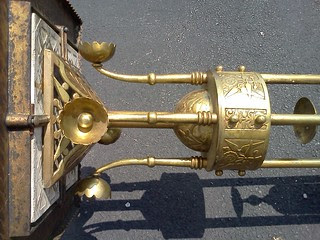 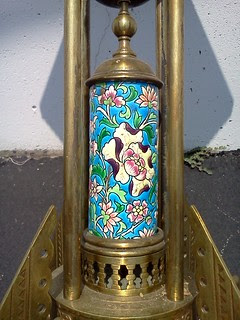 This antique plant stand is (I believe) a late 19th century Bradley and Hubbard brass plant stand with a Longwy Pottery tile top and decorative cylinder. This I gathered from about 20 minutes of Google Image searching and have not had ample time to further confirm, but if so...this is something of a super score! And a super score that I am NOT loath to let go...unlike many of my other such finds. 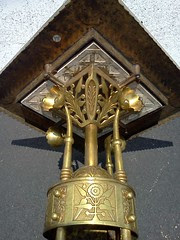 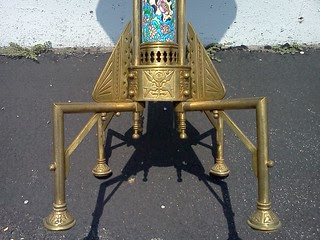 The seller was asking for offers (and info...but that isn't how this works) so I called him this morning and asked if it was still available, since the ad(s) had been up for weeks. He said that it was still available but that he had a guy who was going to scrap it for him fir $50. No no! No no no! I doubled the offer and drove right over to pick it up in Illinois this morning. Alas, given the high(er) end nature of this Antique I feel a little out of my element. Neither the shop nor the antique mall seem to be the right place for something like this. So, through a cooperative effort with a good buddy of mine, this may well end up on eBay!
Posted by Mr. Modtomic at 8:05 PM