The Upholstery Has Been Done For Weeks. I'm Just Now Getting Around To Re-assembly. I'm Blaming Weird Work Hours And A Texas Roadtrip. Status: Almost Ready. 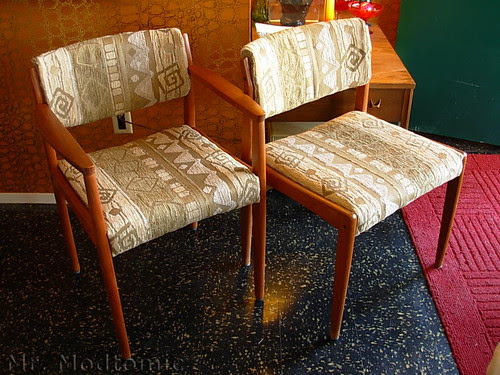 I didn't pick out the fabric.  I would have gone with a solid much like the original, but these ain't mine so it don't even matter.  They look tons better than they did with the soiled fabric that was there.  All I got left to do is put them back together...well, almost all. 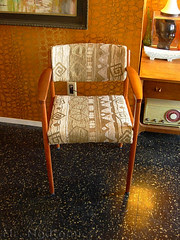 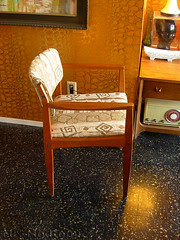 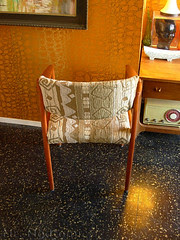 today.  What I didn't know was that there are two different sizes of bottoms and backs!  I had already

the wide set...but I had already assembled it with a narrow set.  I wasn't going back so I pushed on

and assembled the other chair with the wide set.  So I gotta take them back apart anyway. 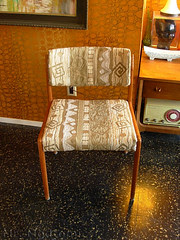 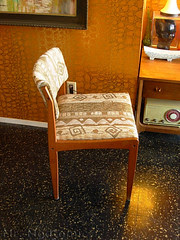 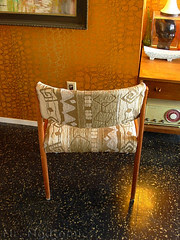 Not that it really mattered, because I was going to pull them back apart to clean up the sides with

some danish oil as soon as I had a chance.  It's getting warm out so I'll be able to get to that this

weekend hopefully.  On top of all that, the seats and backs are upholstered as a set and the patters

are supposed to match up.  See what I did wrong in the chair above?  Oops. 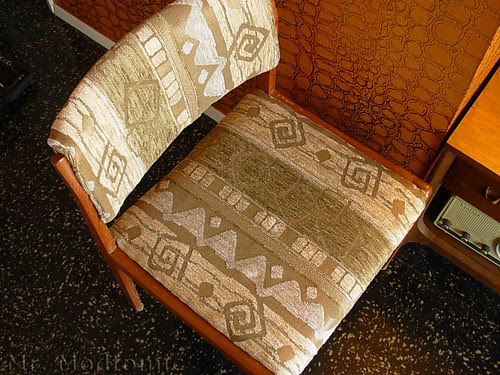 But still, you get the idea. The re-upholtery project for the Girlfriend's Mom's chairs is coming right

along and will soon be history! Since the owners picked out the fabric, I'm sure they'll be happy with

the results. I just need to get them over there soon! This has taken way to long to get started, but at

least it's getting done.
Posted by Mr. Modtomic at 4:38 PM

Email ThisBlogThis!Share to TwitterShare to FacebookShare to Pinterest
Labels: Before and After, Chairs, Danish