Short Cold Afternoon Of Project Starts. You Might Remember This Slat Bench As An Estate Sale Score From Last Summer. Status: Started? Only Just. 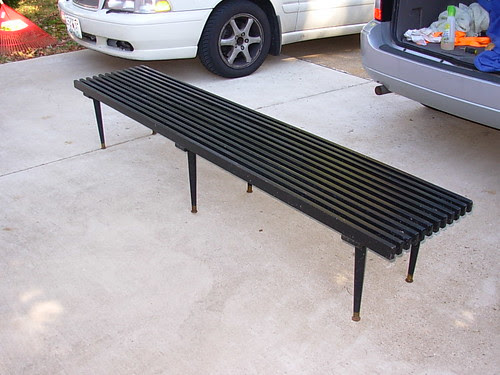 I've been sorta avoiding this project since I acquired this slat bench last summer.  Looking at all those slats that need cleaning / sanding...it just seems so overwhelming.  ::sigh::  But D*mmit, I want my slat bench!  So last weekend the screws came out.  This weekend I started liberating some of that paint. 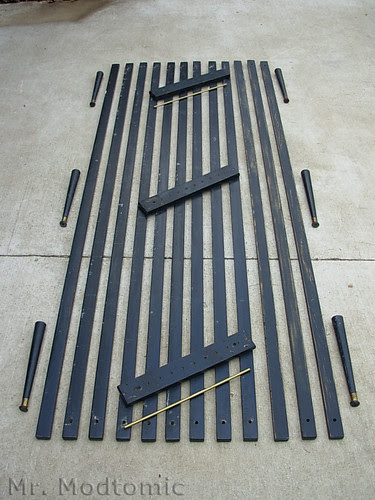 Here's what the bench looks like today.  I didn't get very far, just got three of the seat slats

sanded.  I'm not taking down to bare wood.  I ain't got that kinda time.  I didn't feel like being

the noisy bastard of the neighborhood either so I didn't get out the D/A power sander either,

but I might tomorrow!  That'll make it go so much faster I'm sure. 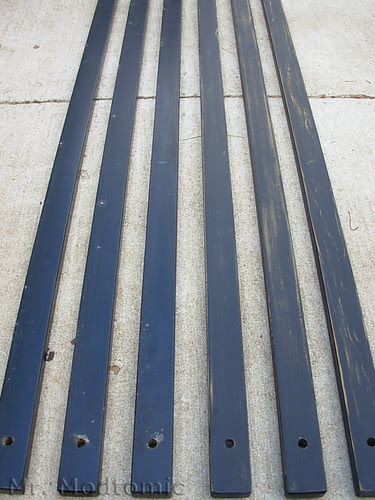 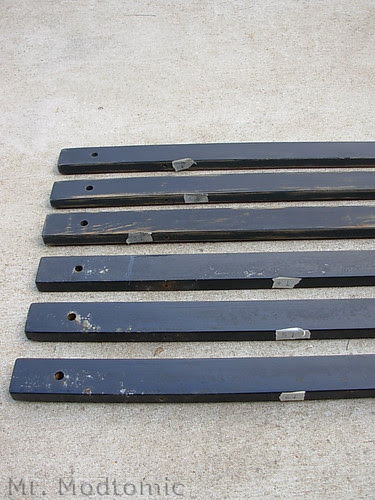 The three on the right are sanded, but no matter how far I got this afternoon I wasn't going to be

able to paint anything. It was just too cool out. It might be warm enough tomorrow to shoot a

little rattle can satin black and see what it's gonna look like. We'll see. On another note, while I 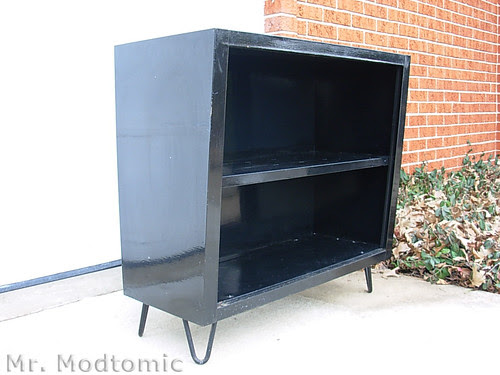 This is destined for our familyroom / TV room. It's just about the right size to fit between the

out too far. I won't be able to put the sliding glass doors on it with the stereo equipment in there

but I'm not even sure I know where those glass doors are. The center channel speaker will

reside on the bottom shelf and the TV on top. A couple of DVDs will fit in there too. I wish it

was a bit deeper though, I do admit. I would rather install the sliding doors. 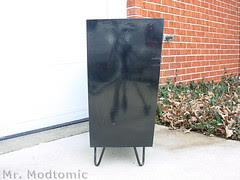 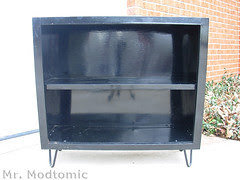 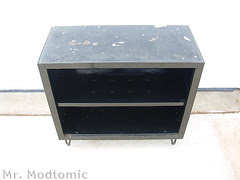 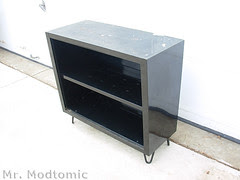 Buuuuutttt...as you can see, the top needs help. It had some really ugly (like it matters) contact

paper up there. I pulled it off. Hmmmm...I wonder if the glue would come off with some Goof

Off. I really should paint the whole thing first anyway. I'm just afraid that the paint is oil based

and I won't be able to rattle can enhance it's aesthetics. How can I tell if this is oil based paint? 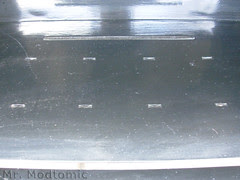 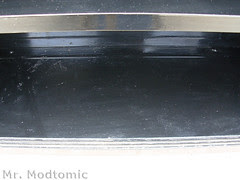 So this is weird. There appears to be a plate trench in the back of the middle and lower shelf.

And what are those punched in divots on the middle shelf for? Maybe they hold some sort of

dividers that have little tabs that slip into them? Weirdness. 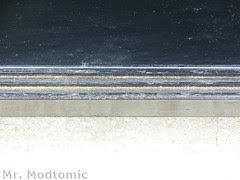 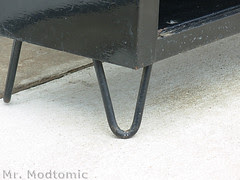 This is the rail for the two sliding glass doors. It has felt or something in there to keep the glass

from screeching when moved. It's kinda dirty. I'll clean it, promise. Nice legs, huh! Aren't these

just about the shortest cutest little hairpins you've ever seen? I think I paid like $15 for the entire

cabinet and if all I ever got to use out of it were the legs...I'd still feel like I was ahead!
Posted by Mr. Modtomic at 2:17 AM