You Might Have Noticed This Eames Lounge And Ottoman KNOCKOFF (oops, sorry forgot that earlier!) Lurking In The Background Of One Of Yesterday's Photos. Yesterday It Was 50 And Sunny...Today 30 And 6 Inches Of Snow. Status: Will Winter Ever End? 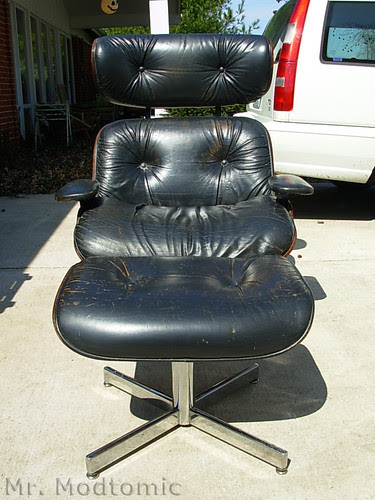 Yup, another project chair.  This one was heaped upon me, too.  I got an e-mail through my craigslist ad asking if I'd be interested in an Eames chair and ottoman that had had it's "leather" dyed black.  I was intrigued and hopeful so I replied asking for a couple of photos.  While I was somewhat disappointed, I wasn't surprised by what I saw. 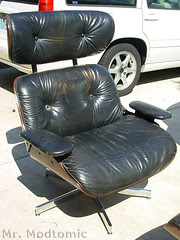 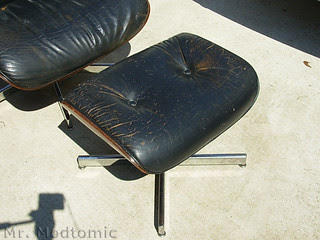 I'll admit, I was hoping that it was a genuine Herman Miller and that it Had been mistreated by a previous

owner and that I could get it for a couple hundred bucks.  I'd have been happy as a clam to have to buy

replacement cushions or covers for a "real thing".  But alas, the seller didn't know what a Herman Miller

is or that there even are knock offs.  Actually, she didn't care either...she just wanted this gone and to get

a few bucks out of it. 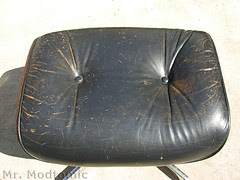 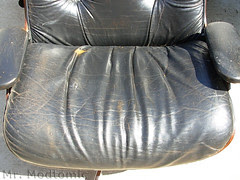 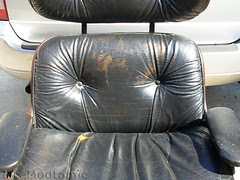 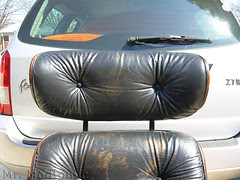 I wasn't head over heals in love with the set but, after ascertaining that the wood and the rocking

mechanism were serviceable, we haggled to a fair price and I agreed to pick it up Saturday afternoon

in Illinois near Belleville...meaning I could hit the Belleville Flea Market before hand.  Bonus picking!  As

you can see, the vinyl has been treated to a dye job.  I'm not exactly sure what the method was (rattle

can of "vinyl paint"?) but it looks like it was successful, for a while.  But now it's a mess, and since it is 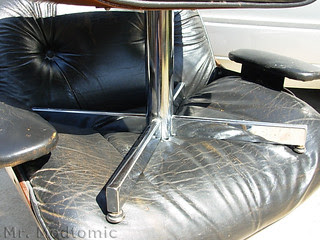 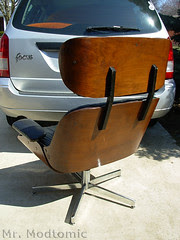 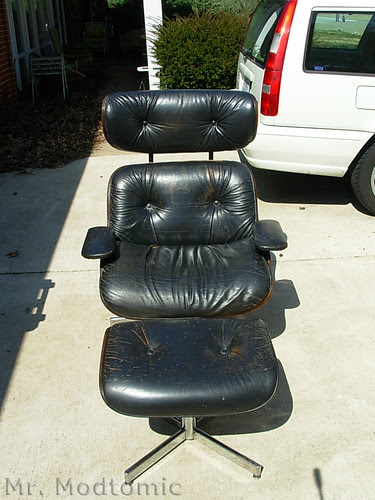 at the same time.  It's shiny.  I'm not happy with that.  I'll be doing some work to the shells as well.  The

for further action!
Posted by Mr. Modtomic at 2:54 PM