I Failed To Take The "Real" Camera With Me Yesterday, But Here's Some Crappy Phone Pics. Status: Left Behind 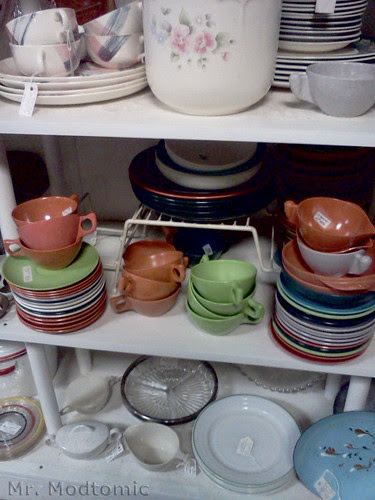 Ugh....I hate relying on my phone for pics.  It's just not cut out for it.  These new phones are great at most everything and having a camera built in can be a God Send but using those pics for anything but a quick reference is a drag.  But it's what I had.  And I wanted to share this booth with ya! 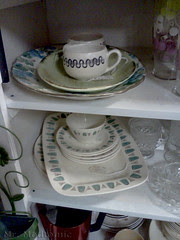 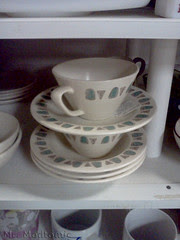 back since one had a substantial crack in the side.  They were priced reall good too as was

most everything else but I don't need a single.  I would have grabbed up all that Metlox

Poppytrail Navajo if I hadn't found all that other stuff that I featured yesterday.  There were

all sorts of Partial Sets in this booth space.  It looked like somebody raided all the boxes in 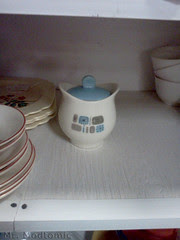 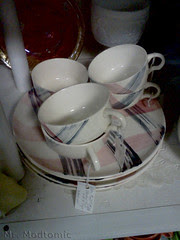 This sugar bowl was sitting with the rest of the Canonsburg Temporama that I DID buy.  It

unfortunately had a couple of chips.  The chips were on the back side but it was priced a

little too high for the damage.  I love this Pink / Charcoal Scots Clan by Stetson China set

but I couldn't bring every stray home I came across.  I had to leave some for others to 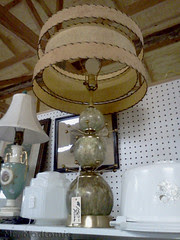 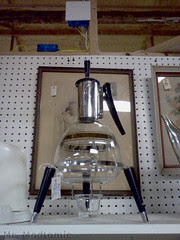 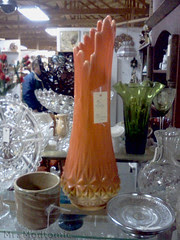 Isn't that a killer vintage A-Bomb lamp? The seller certainly thinks so! That's about what I

think it's worth though. The booth was half off but this lamp was not included in the sale. I

don't blame the seller at all. If they have a house full of retro and this lamp didn't make the

cut...wow. I'd love to know what was kept! And how about the space age coffee carafe /

warmer. Hard to leave behind.  And who doesn't love a stretched out orange slag glass vase?

If it had been a few bucks cheaper I would have taken much better pictures of it...here at

home with my Real camera!
Posted by Mr. Modtomic at 4:00 AM