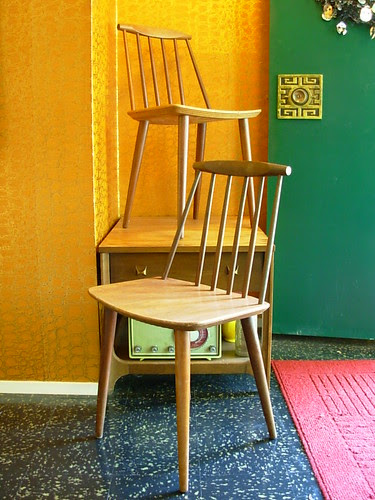 Yeah, I pulled these from a hot dusty little "shop" in Fosters Flea Market. They didn't have a tag on them so I offered twenty bucks for the pair. The guy manning the shop (not the actual shop keep) tried to call the actual seller but couldn't get through. He finally countered with $25 but all I had was $23. So $23 put them in the back of Frank Jr.

I guess I've been getting pretty lucky with the dining chairs lately! I found a set of four Paul McCobb

dining chairs at the goodwill not too long ago that need just to be re-caned to be really nice. These

F D B Mobler chairs need a bit more love to look as nice, but the wear and tear has a nice "farm

fresh" look that can work in some rooms. 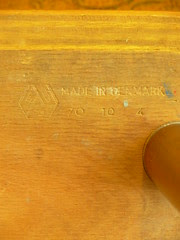 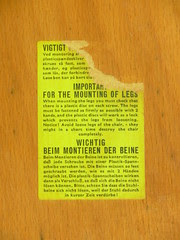 Looks like these were made on October 4th 1970. That would make these 40 years old. Lookin'

good for 40! I looked around a little bit and came to the conclusion that these were designed by

Folke Palsson. Unfortunately I haven't found out much more about this designer. You'd think there'd

be something on Wikipedia! Not so much. I found the chairs on Deconet but they don't list ANY

information except that they are, in fact, "chairs". Thanks Deconet! For real though, Deconet is a

good resource for finding out about vintage modern funiture. I tend to search for info visually

though, so it might not work as well for everybody. 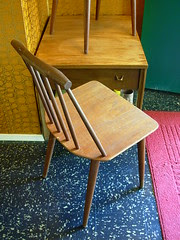 went into the design of the chairs. The top of the back, I forget what that's called, has that nice

sculpted area to rest your upper back against and the seat is bent plywood to cup your bottom!

They must be pretty strong to have held up to 40 years of use! The legs screw out easily and make

them easy to move and or store. 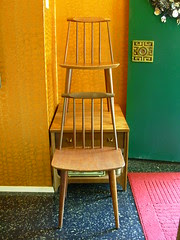 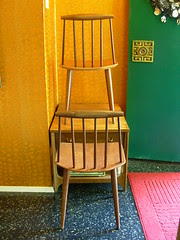 My first concern was for the uprights that make up the back of the chairs. I thought that they'd be

loose and ready to fall apart. Not so. Some are a little loose but the stability seems to be intact. At

least one of them looks like it has been re-glued. 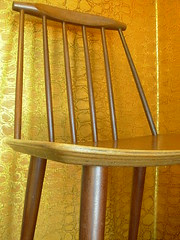 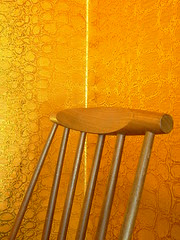 The finish isn't in the greatest condition but the good news is that these also came painted black!

inclined! It would be a shame to paint over that beautiful wood though. Maybe paint just part of the

chairs...like the seat and uprights, leaving the legs and top of the back. I really wish I had found a

set of four. That would have been nice. It was just kinda neat finding them in such an unexpected

environment at all. You know what else I spotted there? I hesitate to speak up about it since I didn't

open to the elements. There were a bunch of old guys sittin' around talking shop (I guess) in a

bunch of random chairs and one of the open ones was this killer rocker. I don't know if it was for

sale or just a chair for guys to sit in while the wifey shops. I was so hot and tired by the time I

shoot some pics of it at the time. Maybe some day I'll make my way back through (probably...want to

shoot them rapids!) the area and see if it's still there slowly dying!